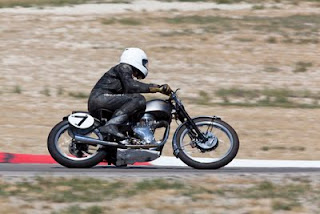 22-24 April, 2011 AHRMA , Willow Springs, Ca. I raced Mike Bungay's 350 Aermacchi and Gary Roper's '51 Velocette MAC. The Aermacchi is a well developed street bike motor in a one off racing chassis that bears some resemblance to a Ducati TT 1/2 trellis frame. Mike lives in Sacramento and I've ridden this bike many times. The Velo has a rigid rear end with telescopic forks and 21" front and 19" rear wheels. The MAC model is 350cc but is running in a 500cc class, Class 'C' foot shift. Gary and I don't know how we are related, but there must be some wandering gene there somewhere that must go back to Sylvester, inventor of the steam motorcycle. Gary lives near Ashland, Or., and came with his son John. Fri. I did a half day of practice, going out first on the Velo. It vibrated like crazy and I decided it was geared too low/short. But, the good news was that it shifted fine after having a reverse camplate and close ratio gearset installed since the first time I rode the bike at Miller M/S park, last Sept. I then went out on the Aermacchi and decided it was geared too short, also. While Mike was changing the gearing, I noticed the swing arm was cracked, so that bike was finished for the day as we arranged to get it welded over night. I went out again on the Velo with one more tooth on the gearbox sprocket and it was better but I thought still too short. It was a bit hard to tell as the bike has no tachometer. I also ran Ron Halem's 500 Goldstar to shake it down and evaluate it prior to it going to the Isle of Man for the Classic Manx GP where Kevin Murphy will ride it. Sat. practice, I rode the Velo with yet another tooth on the G/B sprocket and it seemed good. The Aermacchi, with welded up swing arm and taller gearing initially seemed good, though I decided the front wheel was out of balance/round and on the last lap it started running funny, sort of surging. Turns out the front tire was out of balance and the intake manifold was very nearly broken off all the way around. Off to the welder again. For Saturday's Class 'C' race, there were four entries Fred Mork on a Garden Gate Norton Manx, Ted Van Doorn on a Matchless G80 and Ken Genecco on a Vincent Comet. I got a good start and led for the first 3 laps, but then the clutch started to slip and Mork came by. I was able to nurse it to the finish in 2nd. On the Aermacchi in 350GP, I got a good start and led initially behind Ralph Hudson leading Formula 250 on a TD-3 Yamaha. First, Dave Crussel came by on his 350 Kawasaki Bighorn in F-250, then Jim Neuenburg motored by on Fred Morks short stroke 350 H-D/Aermacchi. Jim went on to lead overall briefly before Crussel got back by him. I got ahead of Hudson when he ran off the track, but he recovered and passed me back. The front fairing bracket on my bike broke almost immediately allowing the fairing to bear against my left hand and clutch lever. It wasn't a huge problem, but was distracting as was the fact the my leathers started to unzip. I finished a distant 2nd. Fixing the fairing bracket wasn't a big deal but, on the Velo we found the the gearbox adjuster bolt had broken, allowing the rear chain to pull the G/B back making the primary chain tight as a banjo string. Gary had no spare, so we had to weld it. This involved indexing it so the thread lined up, beveling the ends, welding it straight, grinding down the weld and finding a 7/16" X 26 tpi die to cut thread over the weld. Amazingly, it came out beautifully. The clutch, however, was wasted an a call went out to Tom Ross in Riverside, who owns a MAC. Tom drove up to Willow Sun. morning and helped install the necessary clutch parts. In Sun. practice, the Aermacchi started backfiring on decel, and I told Mike to look for exhaust leaks. Sure enough, a bracket had broken off, taking a chunk out of the pipe. Back to the welder. We clearly have a vibration problem. I didn't get to practice on the Velo as it took all morning to install the clutch and primary drive, but I was able to do one 'scrub lap' on the warm-up lap of the first race of the day. Again, in the Class 'C' race, I got a good start and led into turn #1 and continued to lead all the way through the last corner on the last lap when Mork motored by my 350 with his 500 for the win. In the 350GP, another good start and and I led briefly overall when Hudson ran wide in turn #3. Hudson came back by, then Crussel on the Bighorn. At the end of the 2nd lap, Neuenburg motored by, but I was able to pretty much hang with him untill the 6th lap when my Aermacchi made a bad noise and I stopped. Mike takes these failures in stride, is undaunted, and is determined to find some more power. Gary has big plans for the Velo, also. A good event despite the wind, which is always a nuisance at Willow, but probably the worst I've seen it.
Posted by Dave Roper at 12:04 PM No comments:

My season so far

Click the Oliver Godfrey tab above to see the developing story of the first Mountain Course TT champion.  The new Indian Racers tab is where we are trying to fill in some information about the rest of the Indian team.
Posted by Dave Roper at 12:44 AM No comments:

Barely 100 years have passed since a team of Indian motorcycles swept the first three places at the Isle of Man Tourist Trophy, and now another Indian entry is set to commemorate this historic victory of the first and only American brand to win a TT race.
A replica of the special 580 cc Indian TT model V-twin has been built by Canadian entrant Peter Gagan and on Friday, June 10, 2011 it will lead the centenary parade lap for historic machines. The rider will be Dave Roper, the first American ever to win an Isle of Man TT. Roper has a lifetime of achievement in vintage racing, including more than 20 AHRMA national championships as well as his win of the 1984 Senior Classic TT on a G50 Matchless.

Roper will be first of 26 starters in the “Milestones of the Mountain” parade lap, leading such legends as Giacomo Agostini, Phil Read and current TT star John McGuinness. They and their famous machines represent highlights in the history of the Tourist Trophy  in the 100 years since its adoption of the full 37.73 mile Mountain Course. The TT was first held on a shorter course starting in 1907.
The Indian factory’s star rider in the 1911 Senior Tourist Trophy race was Canadian-born board track legend Jacob DeRosier, supported by three local riders from England and Ireland. In the event, though, DeRosier suffered tire failure and was disqualified for accepting outside help while Oliver Godfrey, Charles Franklin and Arthur Moorhouse swept the first three places.

Their mounts were special machines built at the Indian factory in Springfield, Mass., to comply with TT rules. Single-cylinder machines were limited to 500 cc displacement while twins, which operated less efficiently with the atmospherically-opened inlet valves which were common at the time, were given an 80 cc advantage. Chief engineer Oscar Hedstrom adapted a 680 cc Indian “little twin” with a smaller cylinder bore and added a two-speed transmission from the company’s 1,000 cc “big twin” to cope with the demands of the hilly Isle of Man course.

None of these special machines survived intact to the present day, but fortunately about 10 years ago Peter Gagan located a 580 cc Indian racing engine in England. It may have been from one of the original TT machines but the records that could verify it do not exist. Working from his home in White Rock, British Columbia, Gagan constructed a replica using a 1911 Indian frame and transmission. No drawings of the TT bikes exist, so the frame modifications and exhaust pipes had to be fabricated according to photographs of the originals. The machine bears Godfrey’s race number 26.

Gagan and his team are eager to hear from potential sponsors of this historic return to the legendary Isle of Man. They can be reached at petegagan@blaze.ca.
Please note also the Paypal link elsewhere on this page to help Dave Roper with the considerable expense of attending this historic event.
Pictured below is young Oliver Godfrey, aboard #26 - this and other photographs were used in Gagan's restoration of the motorcycle to be ridden by Dave Roper.