In a weak moment, I agreed to represent Team Obsolete at the Amelia Island Concours.  T/O had sent three bikes down to Florida a couple of weeks before: two Dick Mann Matchless G-50s and the Cal Rayborn H-D XRTT 750.
The event is a car event, but they've added bikes now for a few years.  The theme was Daytona bikes, the event happening the same weekend as the Daytona 200.  The Barber Museum brought five Daytona 200 winning bikes: the KR 750 H-D that Rodger Reiman won the first 200 held at the the speedway in 1961; 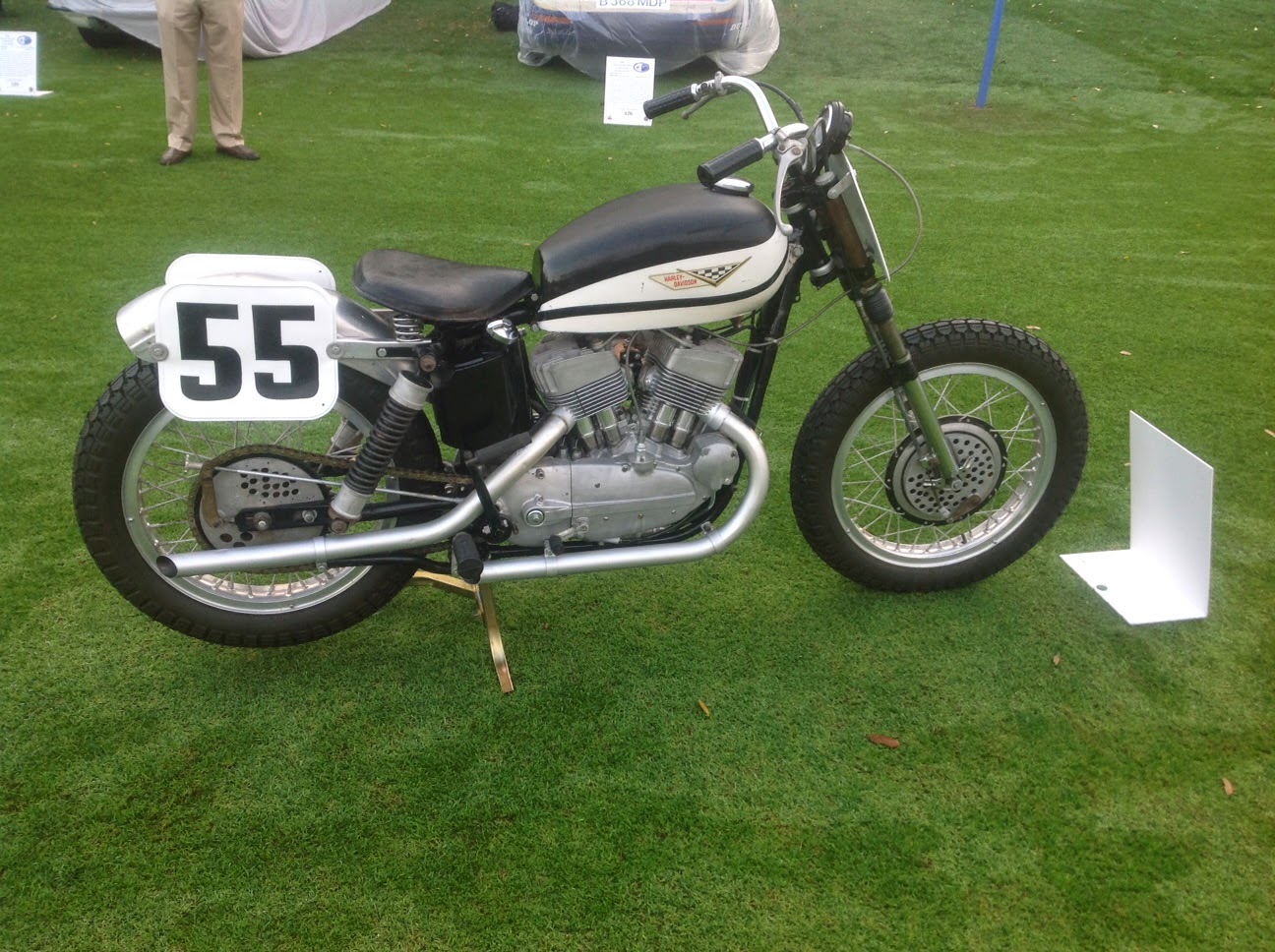 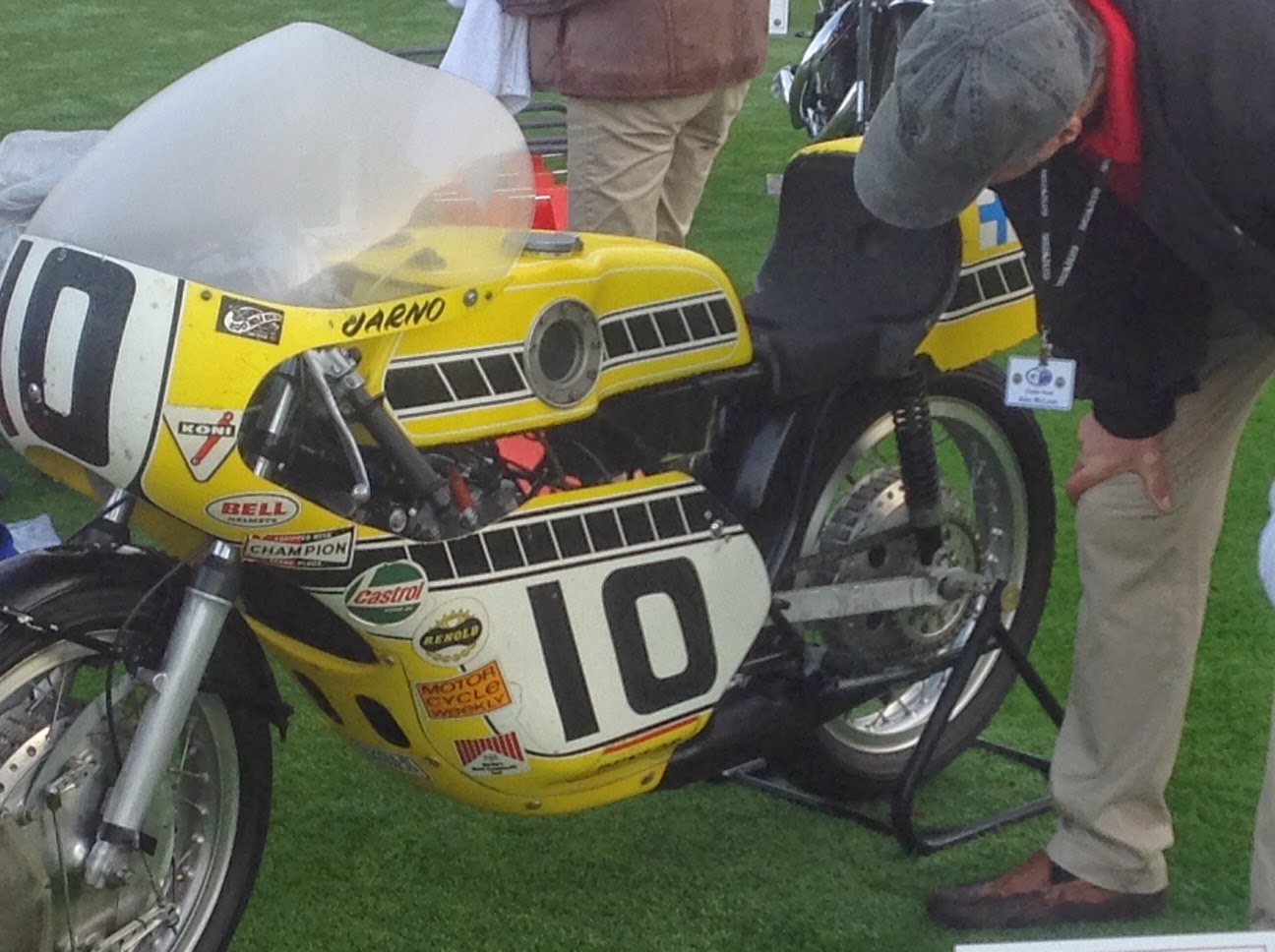 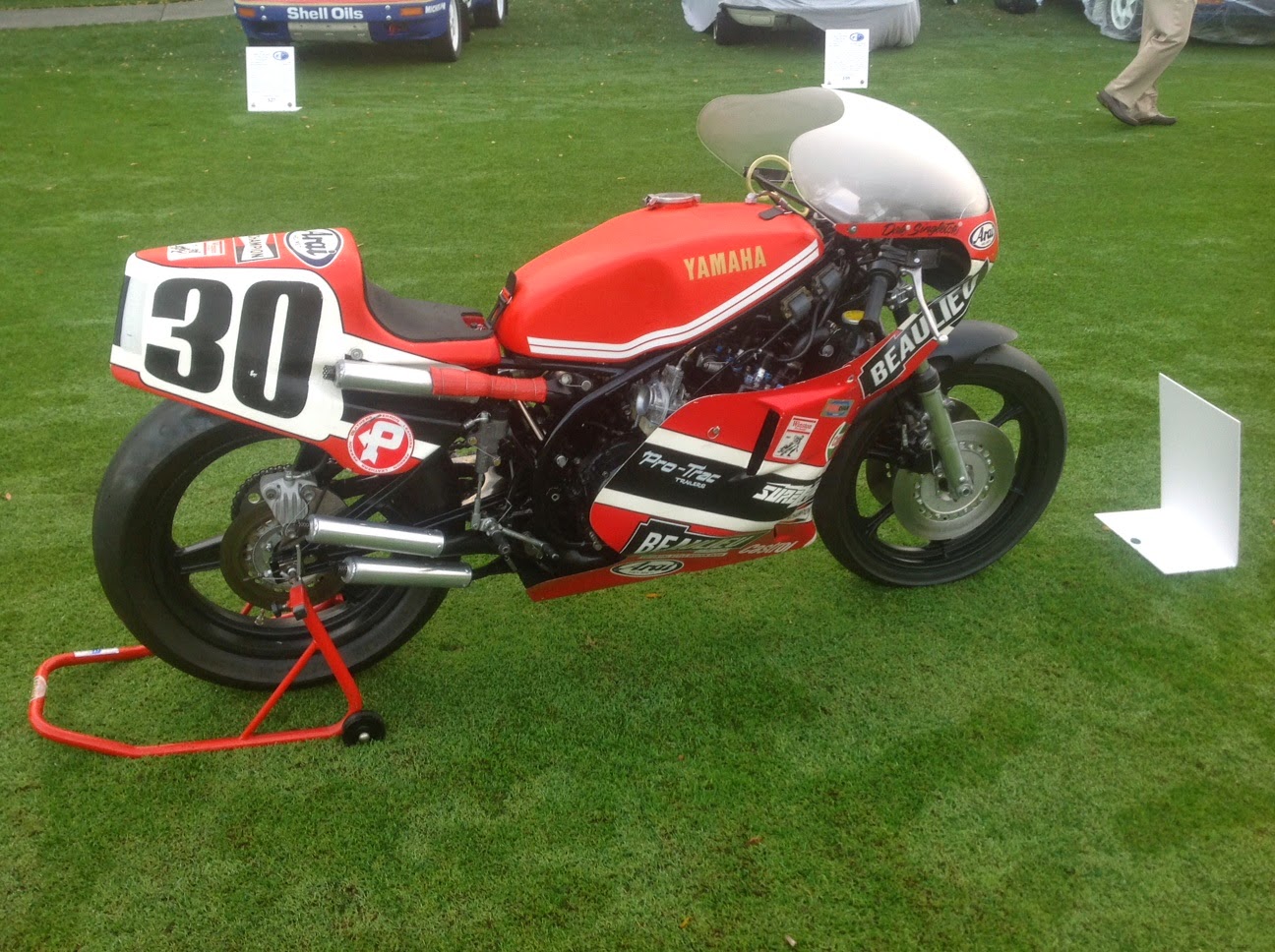 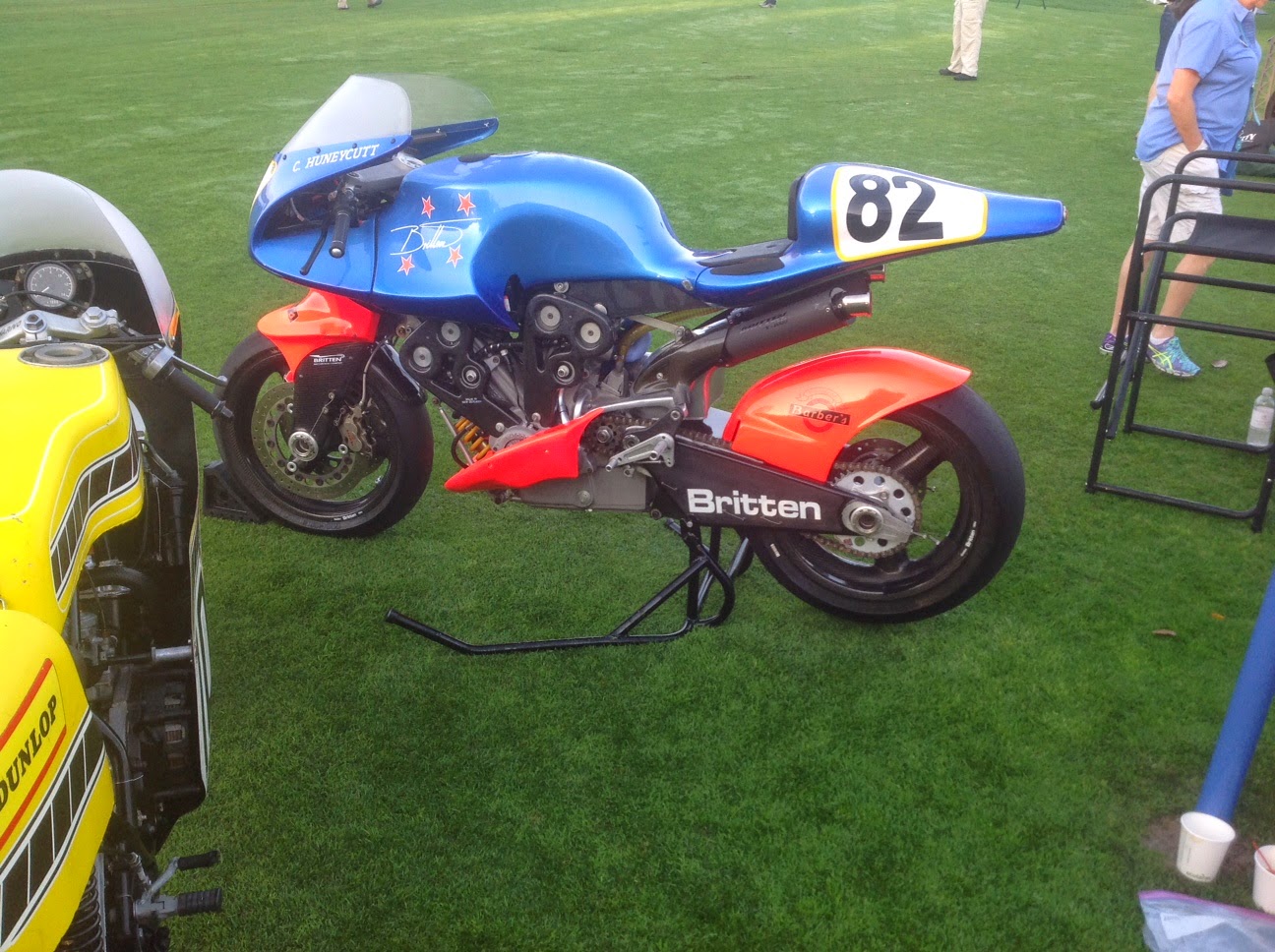 Gordon McCall had three bikes in the show.  The first was one of two Formula 750 BMWs campaigned by Butler & Smith, then the BMW importer, in 1972.  He had just acquired this Bill Peretti, owner of the Daytona Beach BMW dealership, where it had been on display for some time. Gordon had a Rickman BSA A-50 that had belonged to a friend of his who was born missing his right hand.  He built this bike with controls and throttle on the left clip-on and raced it.  Gordon's third bike was an early TZ 700 Yamaha that had been raced in the Daytona 200 twice, being constantly updated (full 750, exhaust pipes, mono shock, etc.) 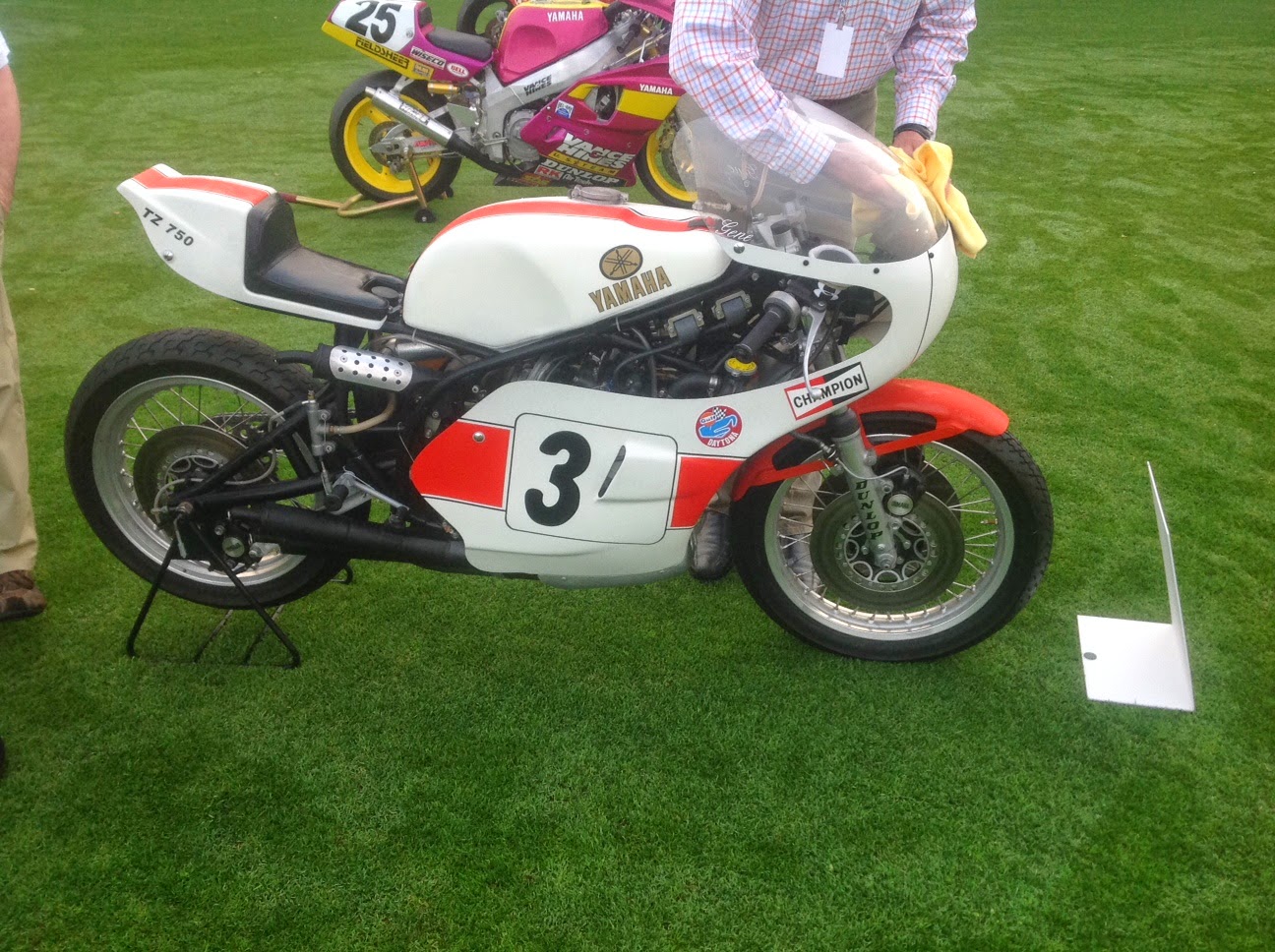 Somer Hooker had Vincent Black Shadow that had been raced extensively by Ed LaBelle. 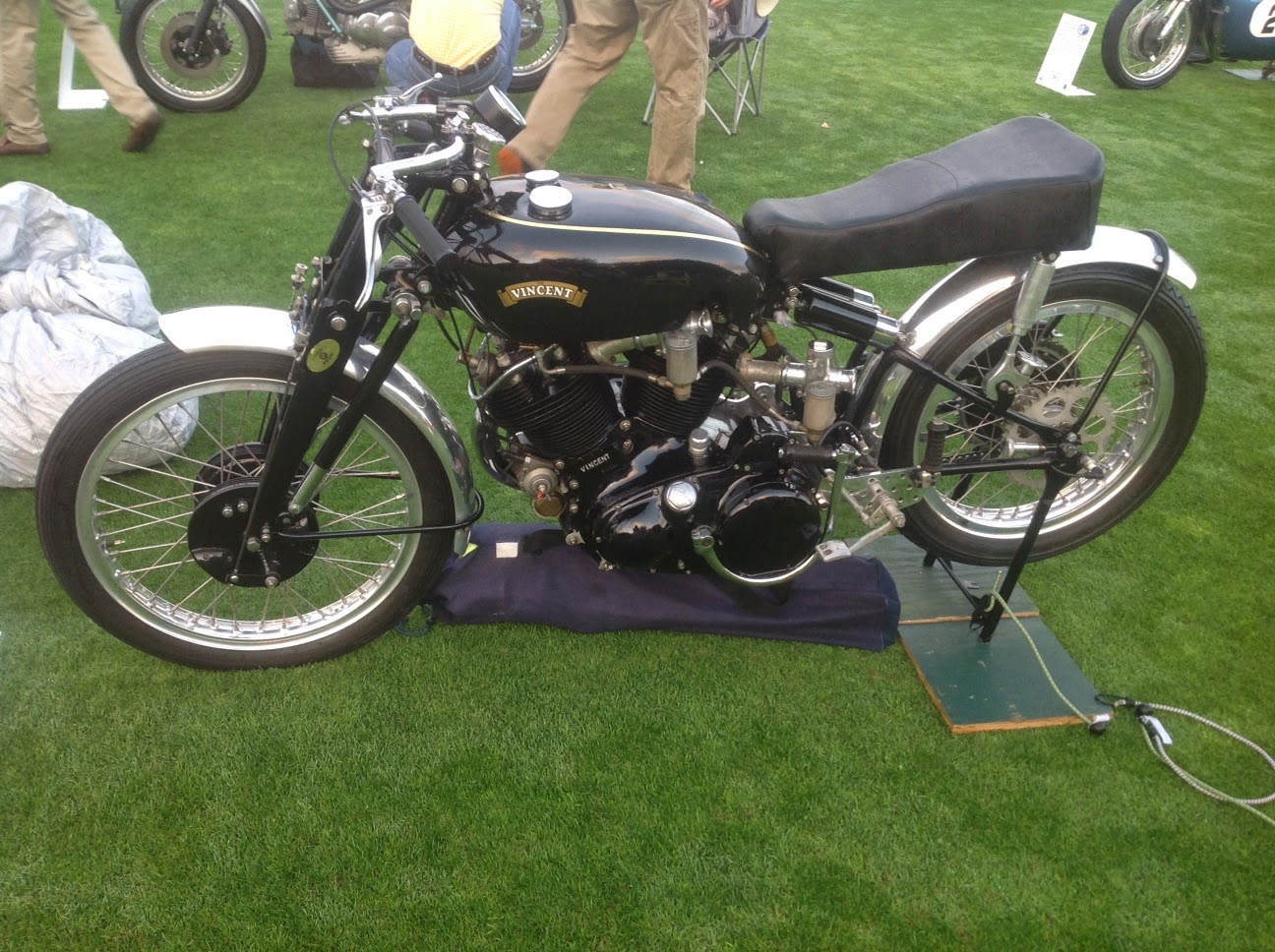 Jim Dillard had a 1974 Ducati 750 SS, restored by Rich Lambrechts, that had been raced by my late friend Ian Gunn, who's Moto Guzzi Dondolino I now own.
Dillard also had the last surviving, of four, 1954 works DOHC 250 Parillas, apparently inspired by the Norton Manx, restored by Jim Dallarosa   This bike had done a couple of Milano-Tartano long distance races and so had been built with a generator for lighting and battery/coil ignition.  Later the bike was brought to the States and competed in Sportsman races at Daytona. 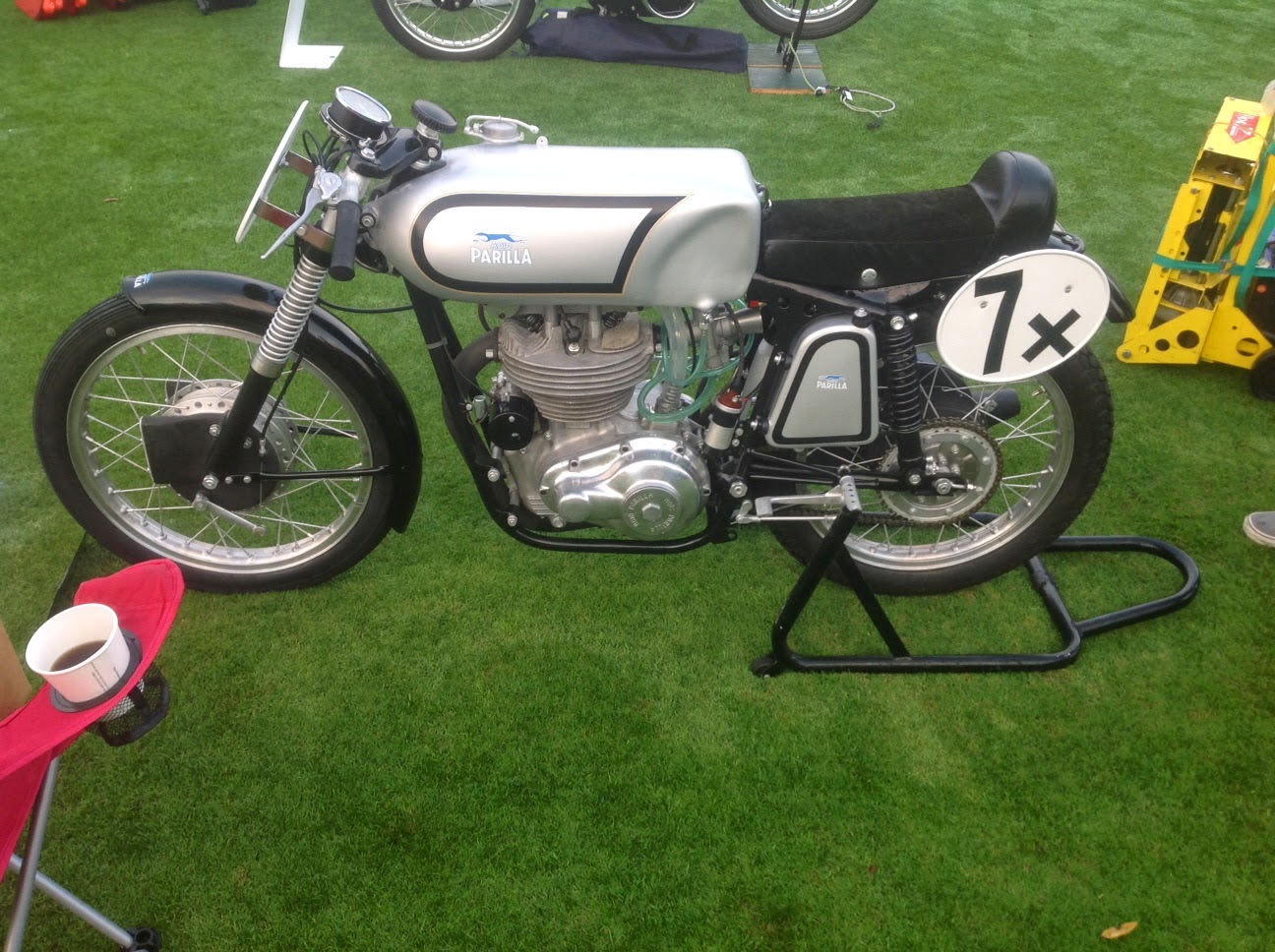 The Team Obsolete bikes included the two Matchless G-50s that Dick Mann had raced, with one of which he won the 1962 Laconia national and finished 2nd in the Daytona 200.  This bike is featured in the April, 2015 issue of Motorcyclist Magazine.  The other G-50 was recently acquired from Fred Mork and is a bike that he campaigned in AHRMA vintage racing.  The third T/O bike is the H-D XR750 roadracer raced by Cal Rayborn in it's final form, with mag wheels and disc brakes.  This bike won the Indianapolis and Laguna Seca Nationals in 1972.

I thought the Parilla, in addition to being very handsome, was notable for being the only strictly works bike the there, not based on any production.
I was vey taken with the Jarno Saarinen TZ 350 Yamaha.  I saw him win at Daytona in 1973 when I was there to compete in my first AMA Novice professional race and I remember being impressed with his red boots. Recently, I saw a photo of Jarno at Daytona and the boots weren't red at all, but blue.  So much for ancient memories. He was dead two months later, killed with Renzo Pasolini in a totally avoidable accident at Monza.  While several of the bikes in the show were unrestored, this bike hadn't been used since he won the 200 42 years ago; a true time capsule.
Among the other unrestored bikes was he Butler & Smith F-750 BMW.  ThIs had a special works frame and was built by Udo Geitl and Todd Schuster towards the end of 1971.  Udo shortened the cylinders 10mm (2 fins) and used 10mm shorter conrods to gain ground clearance.  It use a Harley XRTT long course fairing and a Vesco Yamaha seat, 250mm Fontana front brake and Ceriani forks.  Apparently, even this special works frame proved inadequate when Udo got nearly 100hp out of the motor and Rob North was commissioned to build a couple of frames.  Theses later bikes used mag wheels and disc brakes.  The BMW and the H-D XRTT represent the last of the four stroke twins competing in F-750 racing.

The Parilla, Vincent , 750 SS Ducati, Singleton TZ 750 , and Sadowski OWO1 Yamaha, and Britten were all started for the judging and prize giving.

Judging for the bikes was Dale Walksler, owner of the Wheels through Time Museum in Maggie Valley, N.C., Danny Sullivan, the 1985 Indy 500 winner and avid motorcyclist, and Vicky Smith a Ducatista and hard working organizer.  Dale had a Crocker motorcycle there which he is raffling off. 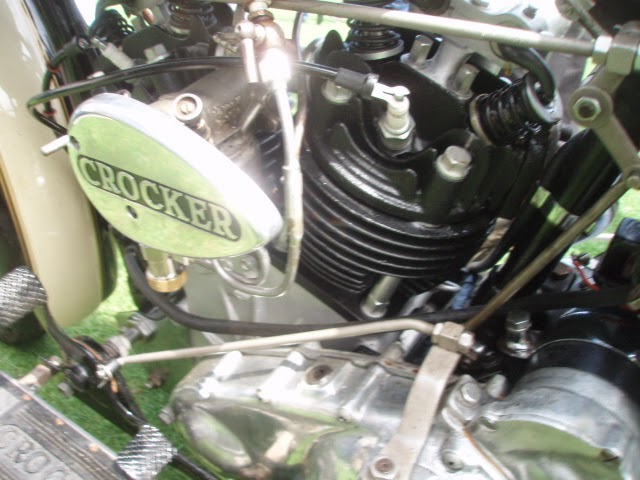 There were a couple of other two wheeler among the some 290 cars on display including an early BSA Goldstar in the back of a Cadilac pickup. 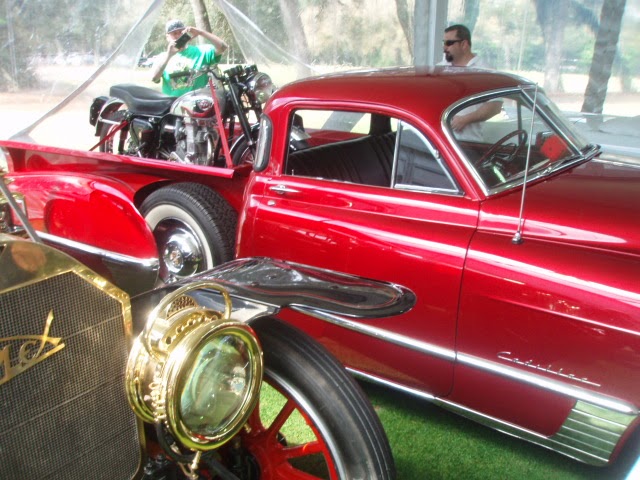 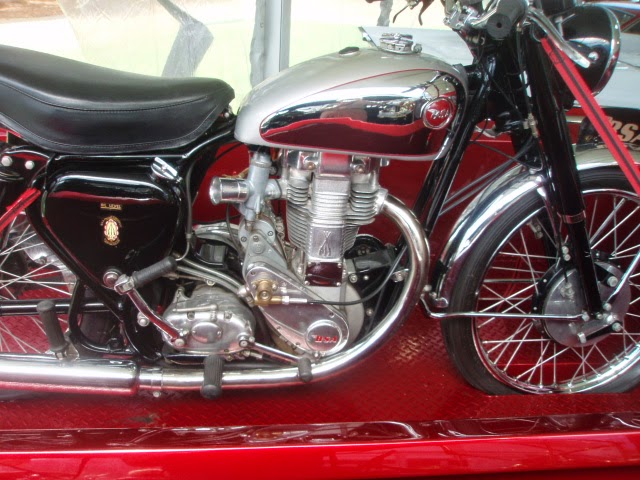 While I'm obsessed with motorcycles, there were some cars that captured my attention.  The Isetta isn't too far removed from a bike, using a BMW motorcycle motor. 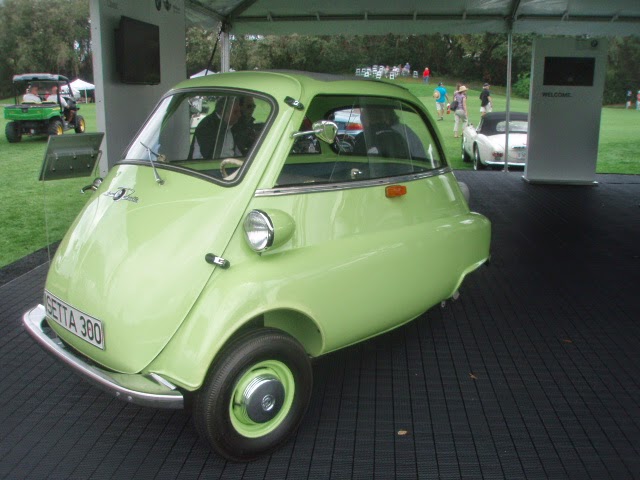 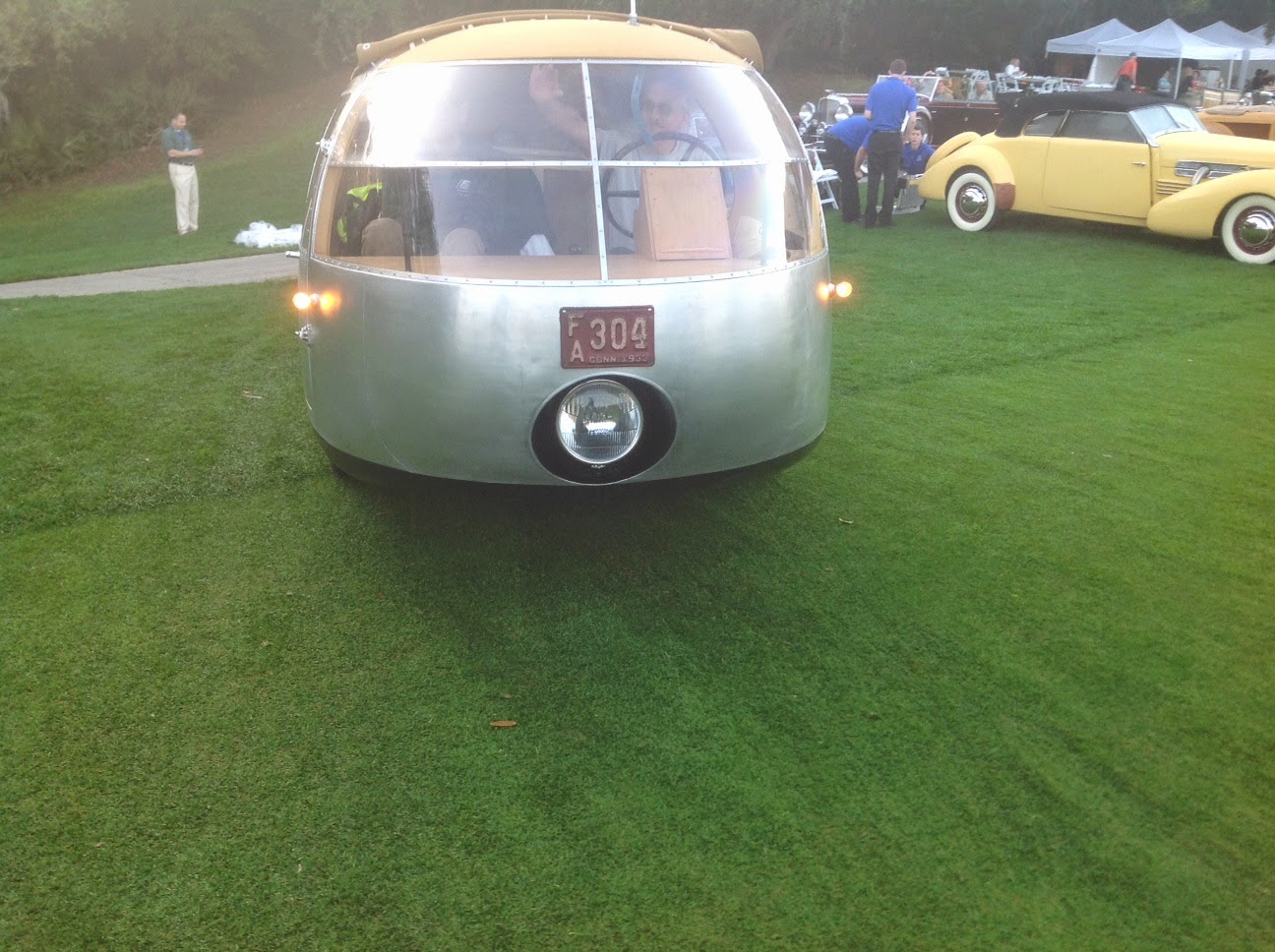 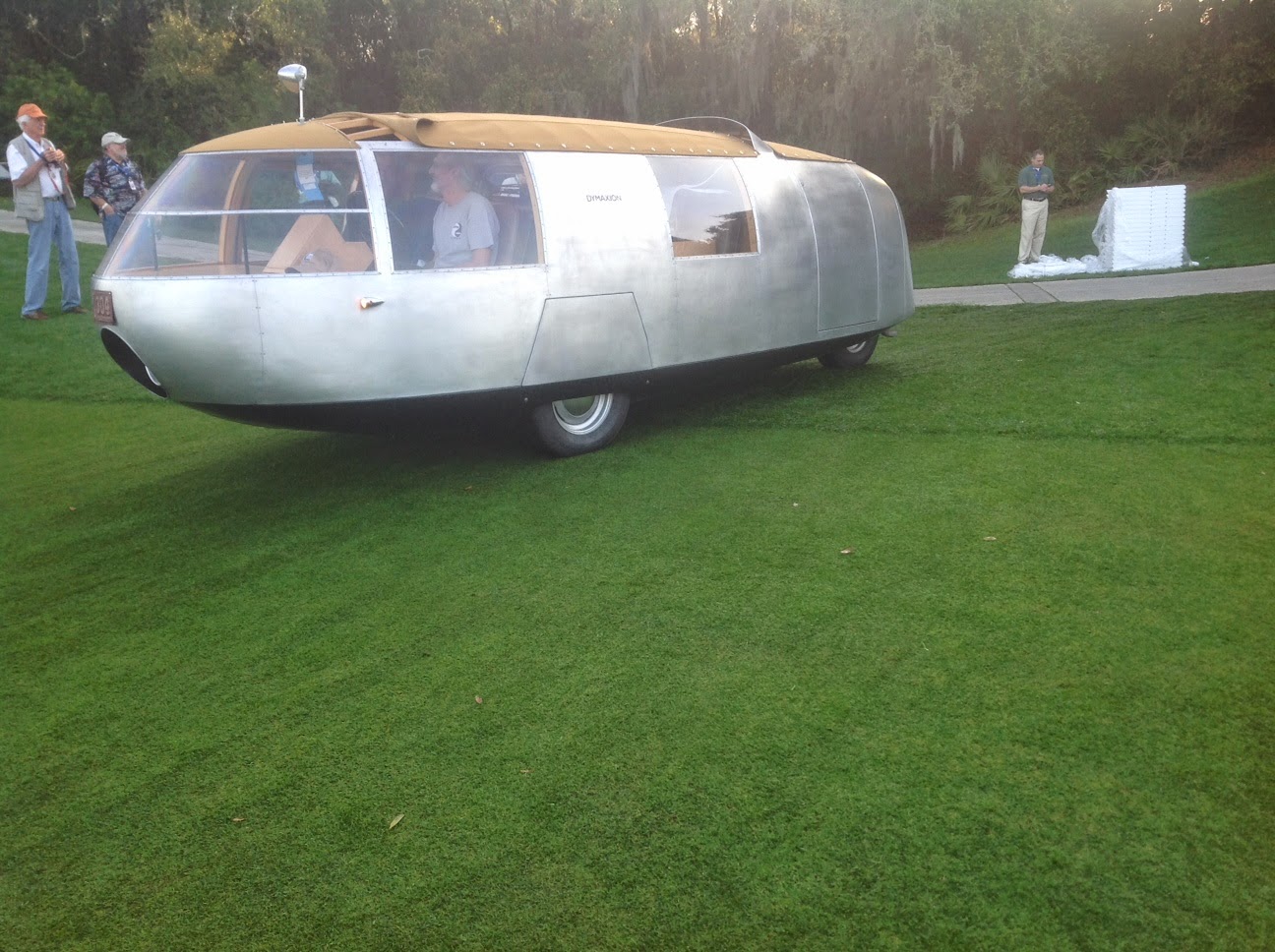 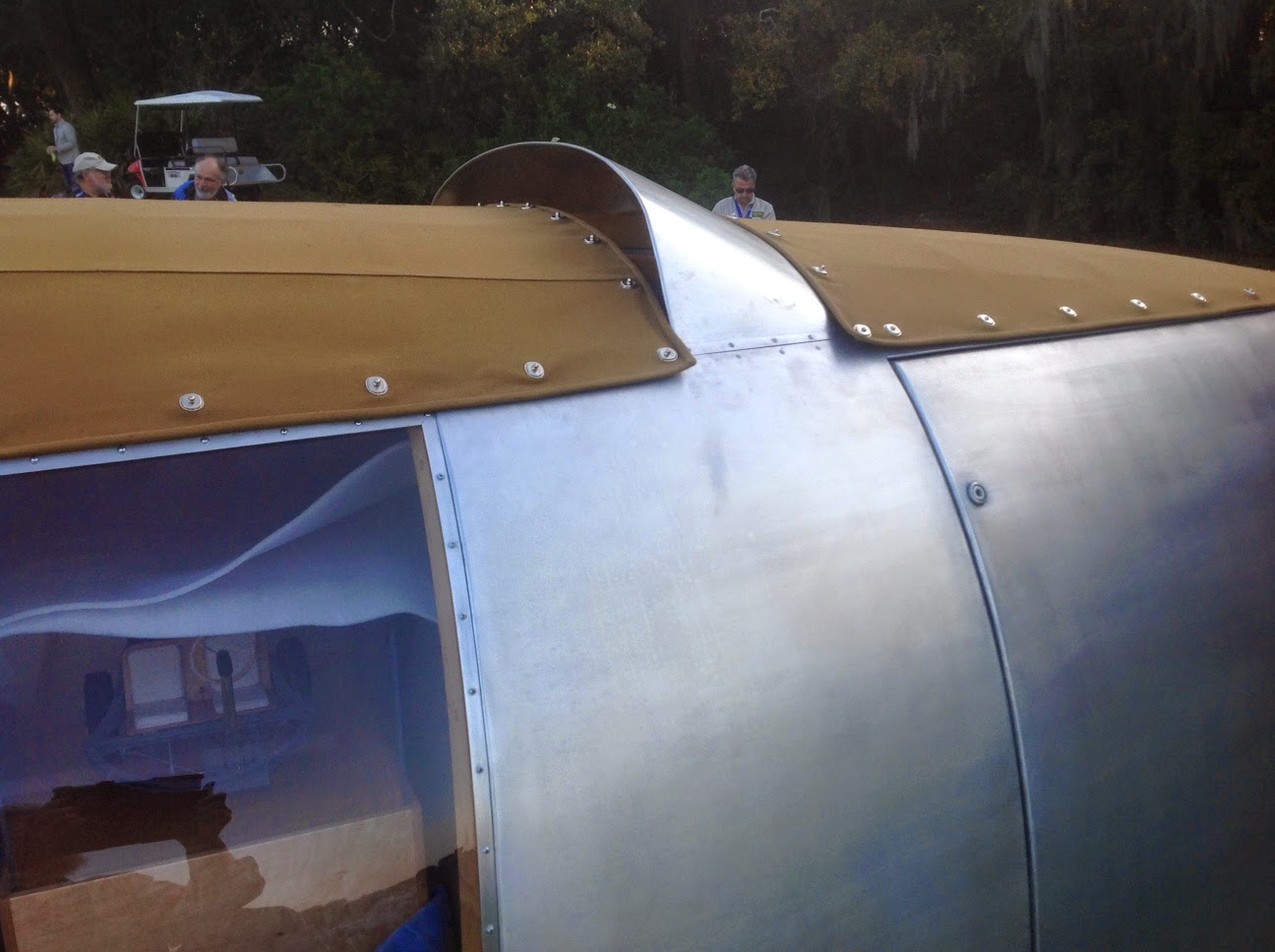 Email ThisBlogThis!Share to TwitterShare to FacebookShare to Pinterest
Labels: museums and collections
Newer Posts Older Posts Home
Subscribe to: Posts (Atom)
Click to read about DAVE riding a 1911 Indian V-Twin at the 2011 Isle of Man TT!