My drive to California this past spring was based around the AHRMA races at Hallett, Ok., and Willow Springs, Ca., but they were really an excuse for a museum tour.  The first day of the trip, I drove just short of Columbus, Oh., and the next morning I visited the AMA Hall of Fame Museum at their headquarters in Pickerington.  Free if you're an AMA member.
From there, I drove to the USAF museum at Wright Patterson AFB near Dayton, Oh., a huge, chronologically arranged museum which I didn't have time to get all the way through.  Free. 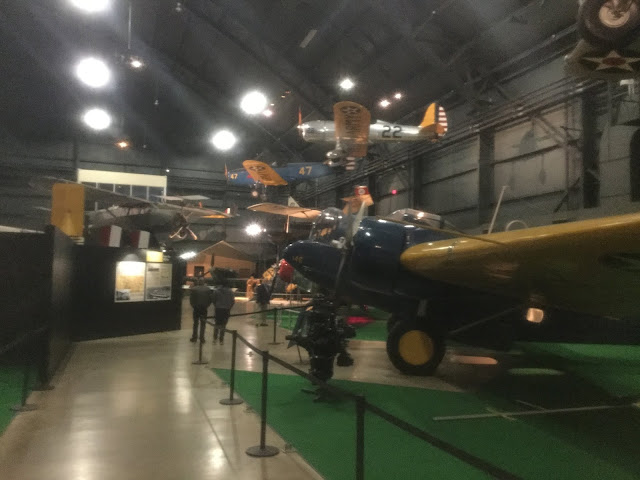 After spending the night with fellow vintage racer Jason Roberts and his family in Pawnee, Ill., I headed to Donelson Cycles in St. Louis, Mo., which has a great in house museum of mostly flat trackers.  They claim to have the BSA Rocket 3 flat tracker that Jim Rice crash in 'On Any Sunday'.  I was surprised that it had a road race style seat.  Free.
From there, I drove to the race at Hallett, Ok., and after stayed with my high school classmate in Oklahoma City, then on to Sandia Park, N.M.  The next morning, I visited Craig Murray in nearby Cedar Crest.  I mentioned that I thought I'd check out the Petroglyph National Monument just west of Albuquerque.  Craig thought that was OK, but highly recommend Acoma Sky City, a mesa that has be continuously occupied for 1100 years.  Doing that made it too late to drive through the Painted Desert in Az., and Meteor Crater was also closed, but I drove down to it from I-40 anyway.  I spent the night in Flagstaff and in the morning drove north to Sunset Crater Volcano National Monument and walked around the ancient lava fields.  I continued north to the Grand Canyon, stopping at a few turn outs, then parking and pulling out my bicycle and riding along the south rim a ways and walking down into the Canyon a little ways.  Spectacular.
I spent the night in Kingman and drove to the Hoover Dam the next morning and took the tour down to the generators.
From there I drove to Red Rock Harley Davidson in Las Vegas.  They have a great collection of race bikes, mostly non H-D including Sheene Suzukis and Steve Baker Yamahas.
I drove on to Willow Springs, where I had a big crash on the Sunday and took a ambulance ride to the Hospital in Lancaster.  The next day, I drove up to Lompoc to my dear old friend, Mary.  Because of my injury, I didn't go to Virgil Elings excellent Motorcycle Museum in nearby Solvang, which I had been to twice before.  Mary and I drove up to Pacific Grove to visit our friends Peter and Marsha.  Peter arranged a visit to Jameson Classic Motorcycle Museum in Pacific Grove.  It's small but had a couple of interesting, rare bikes.

Peter and I then went to the Moto Talbot Motorcycle Museum in Carmel Valley.  It has a lot of Italian Moto Giro type bikes but also some ex Roberts (father and son) and Rainey 500 GP and MotoGP bikes.  An excellent museum.

Then we had lunch in the Baja Cantina, also in Carmel Valley, which had motorcycles and race car motors on display.
On the Sat., we went to the Quail Motorcycle Gathering, also in Carmel Valley.  This is decidedly not free, but you get a superb feed and a huge display of vintage and custom bikes in a beautiful setting.
I headed back via I-80 stopping in Wendover, Ut., Kimball, Ne., then visiting vintage race bike owner, builder and sponsor, Dale Coffman in Eldon, Ia.  Dale took me to the American Gothic House Center.  This is the house in the iconic painting 'American Gothic' by Grant Wood and Dale's late wife was instrumental in preserving the house and establishing an interpretive center.  From Eldon, I drove to to the National Motorcycle Museum in Anamosa, Ia., which is extensive and cover all disciplines and eras.  The museum has an excellent website with extensive photo of the bikes:1962-victoria-155
From Anamosa, I spent the night in Chicago with friends, then on to Sharron, Pa., then back to Hicksville.  It was a wonderful trip, other than repeatedly crashing.
Posted by Dave Roper at 11:55 AM 3 comments:

Email ThisBlogThis!Share to TwitterShare to FacebookShare to Pinterest
Labels: museums and collections
Newer Posts Older Posts Home
Subscribe to: Posts (Atom)
Click to read about DAVE riding a 1911 Indian V-Twin at the 2011 Isle of Man TT!