A day home from Mosport, then off to the IOM. The flight was early arriving in Dublin, but late leaving Dublin, due to a hanger fire that stopped all incoming traffic for a while.  My dear friend Sue met me at the airport and drove us to Douglas where I got a SIM card for my phone and we had some lunch.  The she drove us to the the rental car agent where I picked up the Ford Transit van that we would be using for the week, and I followed her to her home in St. John's. 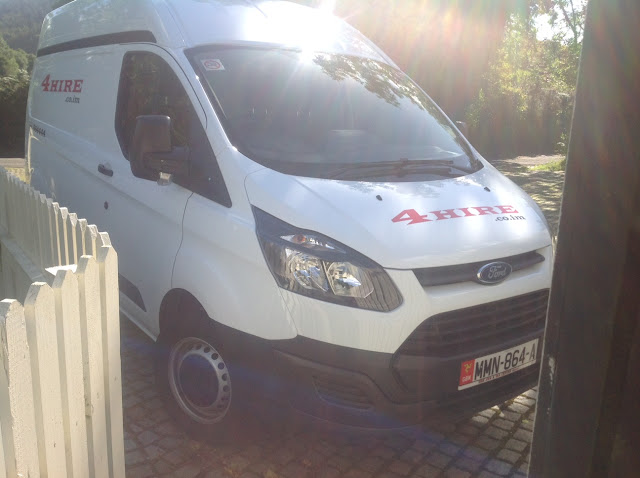 We loaded some bicycles on the back of her car and first drove a little ways and took a hike up South Barrule in a strong wind coming off the Irish Sea.  Then, we drove through Peel to Kirkmichael where we parked and unloaded the bikes and rode up the former rail line to spectate the evening practice at Rhencullen, a spectacular series of bends just out of Kirkmichael.  We sat on the bank and watched Michael Dunlop come through first and stand his X-R 69 Suzuki right up on the jump.  After 15 or 20 minutes, there was a red flag due to a crash at the 13th milestone and about 7 or 8 bikes pulled up right in front of us.  One of the riders was Ian Lougher.  Ian finished 2nd to me in the '84 Senior Historic TT, in only his 2nd race on the Mountain circuit, having finished 3rd in the previous year's newcomers race, then gone on to race in an incredible 141 more races at the TT, including 12 wins.  Ian chatted with the other riders there at Rhencullen and a few of the spectatators sitting on the bank.  After a while, he recognized me and we chatted a bit.  Then, the fellow next to me on the bank, turned and asked me if I still had my 250 Moto Guzzi.  Surprised and wondering how this fellow would know I had this bike, I replied 'Yes' and then realized it was Paul Smart, who I had met on a Moto Giro in California in 2008.  What are the chances that the three of us would be together at this spot in all of the 37 3/4 miles of the Mountain Circuit on a Wed. evening practice?  But, the Isle of Man is like that.

After spending the night at Sue and her husband, Peter's, house , I drove the van the next morning to the Airport to pick up Mike Gonteskey, a long time friend, former vintage road race competitor and current Moto Giro competitor.  Mike had volunteered to be the Official Team Obsolete whipping boy and gofer.  We checked into the Regency Hotel on the northeast end of The Queens Prom in Douglas. We then went up to the Paddock and unloaded the crate with the Team Obsolete 1954 AJS E-95 Porcupine. 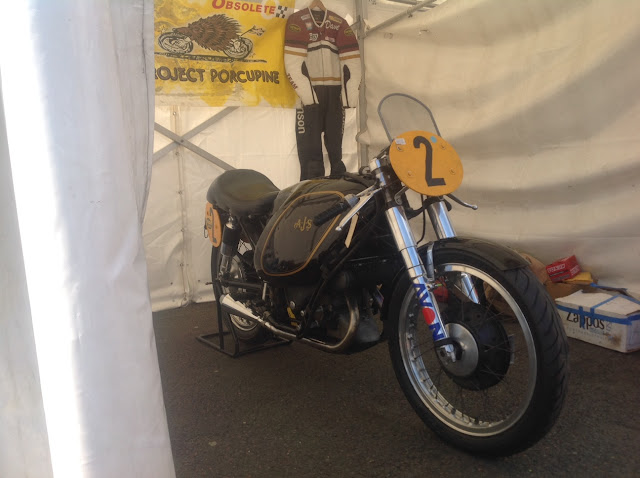 This was only the second time that an E-95 Porc had appeared at the Isle of Man since the Works last raced them.  In 1964, Mike Duff rode Tom Arter's E-95 one lap of practice, but it developed mechanical problems and it wasn't raced.  We shared a tent right behind the grandstand with Ken Mcintosh, who had brought the very first Featherbed Norton Manx, a bike that Geoff Duke debuted in New Zealand in 1950.  This bike was featured in a number of tributes to Geoff Duke, who died last May.

The Porc uncrated, Mike and I went for a tour of the paddock.  The National Motorcycle Museum had a huge display of Nortons spanning everything from the Rem Folwer bike that won the inaugural  TT twin cyl. class (but let's not forget that Charlie Collier won the single cyl. class and overall on a Matchless), through Manxes, JPN Commando based racers and the Cosworth engined Challenge, through a whole gaggle of rotary racers.  There was a big display of Kawasakis and there I saw Hurley Wilvert.  I chatted with Ollie Linsdel, who's remarkable Royal Enfield racer had been the fastest single in the previous evening's practice.  Chris McGahan had some remembrances of the Porc from when he lived just down the block from where Mike Duff stayed in London when he was riding Tom Arter's Porc.  I caught up with Bill Swallow, who was racing along side of his son, Chris.  And we visited Dave and Lorraine Crussel and Scott Clough, who was looking after Dave's TZ750. The Mike and I went for a lap in the van.  We stopped at Tony East's A.R.E. Museum in Kirkmichael.  I paid particular attention to Tony's Greeves Sport Twins, a model with which I've recently become enamored.

Somewhere after Ballaugh, Alex George came by me on a Norton rotary and I was able to follow him for a good ways as he slowly pulled away.  I lost sight of him in Ramsey, but then saw him again at Brandywell and closed on him into Windy Corner.  He was clearly having a problem and I passed him before I got to the 32nd.  Afterwards I talked to him and he told me that he ran out of petrol and that he coasted all the way down to Hillberry where he knew someone would have some fuel. Sure enough, he was able to get some and restart the bike and finish the lap.  I finished the lap trouble free and was able to ride at a pace that kept it interesting, but I didn't scare myself once.

I talked to Les Trotter after the lap and he said that after he did the jump at Ballaugh Bridge, he got a shock every time he touched the clutch lever on the RG 500 Suzuki that he was riding.  Not wanting to abuse the gearbox of this valuable bike, he dutifully used the clutch for each shift, but the anticipation of using the clutch was a bad as the actual shock.  They found after that the fuel tank had moved down when he landed from the jump and a spark plug lead was grounding on the tank and electrifying the clutch lever.  I spoke to Steve Parrish the next morning at the hotel and I mentioned that I thought they were going to cancel the Lap.  He told me that he thought so too and that he got the word that it was going ahead while he was in the Beer Tent.  He was sure that the beer helped him on his lap on a Molnar Manx, the first time he had ridden a Manx at the Island.  Monday evening we had dinner with local friends at a restaurant on the quay in Peel.
Tuesday, Mike and I crated up the bike and tools and spares.  I had some time to kill in the afternoon, so I took a ride to Laxey.  By the time I got there, the Laxey Wheel, a huge water wheel that was used to pump water out of the lead mine, had closed, but I was able to wander around some of the other old mining structures and see the train come through town on the Electric Railway.  It's a charming trip back into the Victorian era.
We had a very amusing dinner with John Cronshaw and Sandro Baumann that evening.  Sandro's English isn't so good (though it's far better than my Italian), but John's Italian is very good, and they're both very funny.  Rob knows a bit of Italian and Mike speaks pretty good Spanish, which Sandro also speaks.  So the dinner was conducted in three languages and lots of hand gestures and was great fun.
Wednesday morning it was off to the airport to fly back to New York via Dublin and so ended another wonderful trip to that magic Isle.
Posted by Dave Roper at 11:53 AM 1 comment: