As the first AHRMA race of the season approached, at Roebling Road Raceway, it started to become clear that all of my race bikes were either not going to be in this hemisphere or apart and waiting for parts.  My 350 Sprint was on the boat returning from Australia.  My 250 Sprint was waiting on a piston from JE and a crankshaft from Falicon ( i.e. I hadn't started early enough).  And, my Dondolino was waiting on a camshaft  and cam followers from Italy.  I dropped a few hints, and my arch nemesis and good friend, Jason Roberts, said at the last moment, that he could loan me a motor that I could install in my 250 CRTT chassis.  He talked about either a 350 ERS motor or a 200cc Sprint motor.

But, when we met up at the track Fri. morning, he suggested that it would be easier to install his 250 CRTT motor which he had just picked up after being freshly rebuilt and was sitting in a box.  That way we wouldn't have to remove a motor from a chassis.  This went fairly smoothly, although we put my intake manifold and carb on his head.  I had forgotten to bring a drive chain, but Jason had a few and I found one of the right length.  I had also forgotten the shift linkage, but Al Hollingsworth came up with that. 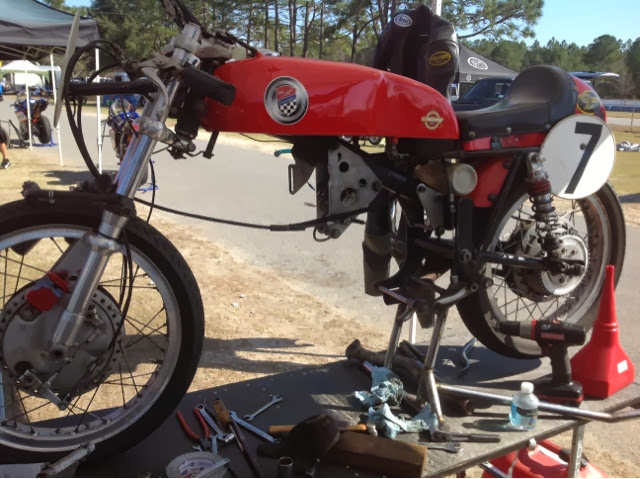 We got it buttoned up and put it on the rollers, but didn't get a pop out of it.  We pulled out the sparkplug and it was sparking like crazy.  We tried it again and not a pop.  It must be the timing, but when we checked it, the line on the rotor lined up with the mark on the stator at just the right time.  Maybe it's the mixture, so we checked the float height and lowered it.  Still, not a pop.  After a couple of calls to the engine builder, Bill Bailey, and trying on the rollers a couple of more times, we put a timing light on it and confirmed the ignition timing was 180 degrees out.  We pulled the rotor and turned it 180 degrees, and the motor started right up.  So, I slept soundly Fri. night knowing I had a running bike.

Sat., they ran three quick rounds of practice and I got out late in the first one and only got one slow lap, being gentle on a fresh motor and feeling how the six year old tires were going to act.  In the second practice, I did three laps, but it didn't want to take full throttle.  The plug looked lean, but my jets were on the boat coming back from Australia, and no one had a bigger one than I already had in my carb, so we raised the float level back.  I was a bit better in the third practice, but still not right.  Jason had a bigger float and we installed that for the race.  I never got a good fix on the gearing because my tach wasn't working for some reason.

In the 250GP race, Jack Parker and Paul Germain on their DT1 Yamahas, pulled away, with Germain getting by Parker, and I ended up a distant third.

There wasn't much I could do for the 350GP race, except ride harder.  Again, Germain and Parker pulled away.  Probably on the fifth lap, I saw Parker pull off.  Then, a lap later, I saw Alex McLean (riding a Norton Manx in the 500GP class) pull off.  I finished what I thought was a distant second, but as I completed the cool off lap, was that Germain I saw on the trailer with McLean?  Yes it was.  Both Parker and Germain's motors had seized their cranks, and I had, in fact, won.  To finish first, first one must finish.
For Sun., I installed a Veglia tach that Jason had spare in place of my Smiths chronometric, and saw that I wasn't revving the motor enough.  Al Hollingsworth found that he had a modified main jet which appeared to have a little bigger hole in it than mine and we tried it for the last (of two) practice.  Though still not perfect, the bike was best yet.  I took the checkered flag and was was riding it hard into the pit-in to get a good plug chop.  Just before I chopped the motor in the pit lane, it made a bad sound and I clutched it.  Back up on the bench.  We found that the exhaust valve was barely opening and, after pulling out the rocker and pushrod and finding that they were fine, realized that the exhaust tappet had broken.  If it had happened 100 meters later, it would have been on the warm-up lap of the race.
We pulled the clutch off and the ignition rotor and removed the timing case.  There was the head of the tappet laying under the camshaft.  Al was able to remove the shank of the tappet with a magnet through the head.  Jason had several used tappets and we choose the one that looked the best and installed it.  Al and his nephew, Dave, put the timing case back together while I changed the gearbox sprocket as, now that I had a working tach, I decided that I wasn't revving it enough. 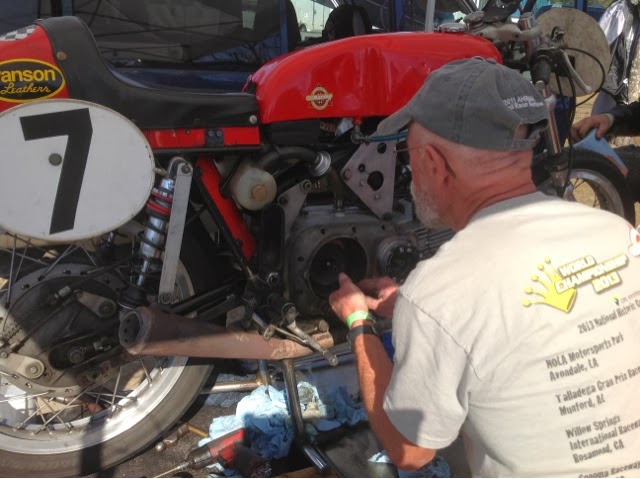 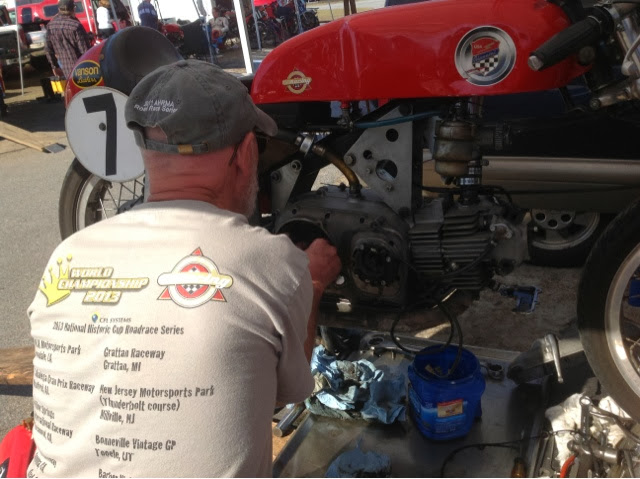 We got it buttoned up and put it on the rollers but, again, it didn't make a pop.  It had no spark.  We disconnected the kill button, but still no spark.  Al and Jason each had a spare coil of unknown condition and we loosely rigged up each, but still no spark.  Al had a spare stator, but the adaptor was different , so we had to take the pick-ups off and put them on Jason adaptor plate.  Still no spark.
The 250GP race was coming up, so Jason pulled his 200cc Sprint (64mm X 61mm) out of the trailer and fired it up for me to ride.

As I was waiting to go out on the warm-up lap, Jason noticed that it was leaking oil from the exhaust rocker cover.  He got a wrench and tightened up the bolts, but it kept leaking.  I rode the bike back to our pit and Al and Dave whipped the cover off and replaced the gasket, which was broken.  I figured that there was no way that I was going to make the start, but when I got back to pit out the '3' board was up and I was allowed to go directly to my grid position without doing a warm-up lap.  So, I started the race on a bike that I had never ridden.  Not surprisingly, I blew the start when I bogged it (4 speed) and was about last off in my wave.  It took a little while to figure out and I found the bike handled very well but seemed way over geared (no tach).  I caught a few people and ended up fifth in class and tenth overall behind a great battle between David Bourbeau and Art Farley on their tank shift H-D's.  David beat Art by 0.072 seconds.  Paul Germain had put a spare motor in his bike and won.  Jack Parker ran his 175 Yamaha and it seized a piston.

We never did figure out why Jason's motor in my chassis had no spark.  It seems an awfully strange coincidence that the ignition failed right when the tappet broke.  But, there was no time to investigate any further.  Al Hollingsworth suggested that I ride Don's 250 CRTT in the 350GP race.  This particular bike is the last four stroke to win the Daytona Novice race when Don rode it to the win in 1968, breaking the race record Walt Fulton III set on a works Suzuki in 1966.  And, he's still racing it 46 years later.  I had the honor of racing the bike at Daytona in 2010, when Don was injured, so I knew it was a good one.

This time, I did get a warm-up lap, and I did a practice start when I went out.  When the flag dropped, I did get a good start and led the first lap.

But, at the end of the straight starting the second lap, Paul Germain drafted by on his DT-1 Yamaha.  Game on.  Paul led most of the time, but I found that I could draft by him if I was close on the exit of the last turn onto the straight, so the bikes were pretty even on power.  Apparently, they were pretty even on chatter, too.  Everybody had been complaining about chatter in the corners all weekend and Don's bike was no exception.  The chatter in turns #1,4, and 7 was intense, until I opened the throttle.  It's hard, though, to force one's self to make that leap of faith and wack open the throttle when the wheels are off the ground and one feels he's about to crash.  On the run up to the white flag signaling the start of the last lap, we cross the finish line just about dead even but, Paul led into turn #1.  I stayed on him, got a good drive out of the last turn, and pulled out of the draft to beat him by 0.043 seconds.