I went to a show I had heard about at the Reynolds art gallery in New Haven, Ct. (http://reynoldsfineart.com/gallery/), of 'Wheels'.  This included cars, motorcycles and bicycles.  I rode my daily beater up to Rich Hosley's shop in Branford, Ct., and from there I rode Rich's '73 Norton Commando Fastback and he rode his '54 Norton International the eight miles back to New Haven with Rich's friend in his '53 Buick Skylark following. 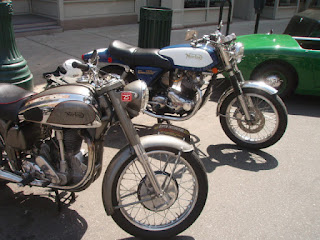 There were some interesting cars: two Bentleys and a Rolls, a custom bodied MG TC(?), a unrestored '31 Graham, and four  Studebaker Avanti's.  But, the motorcycle turn out was thin.  Other than Rich's two Nortons, there was an XS 650 Yamaha bobber and several V-twin choppers made by E-Fab.  I don't have much use for choppers, but these deserved some attention. 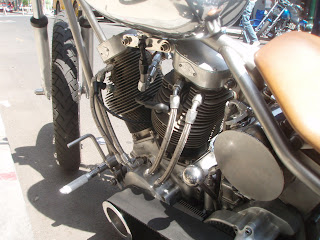 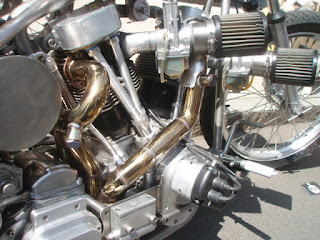 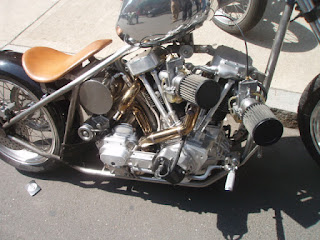 This one, 'Icarus',  had a Lycoming airplane cyl./heads/pistons on a H-D clone lower end.  The motor is well oversquare with a bore of 4+" and a stroke of 3+".  It has Lectron flat slide carbs.  Details included a beautiful throttle assy. that was totally hidden in the handlebars, with a cable spool and bellcranks mounted on the head steady.  The seat was suspended with air springs and four pivot points. 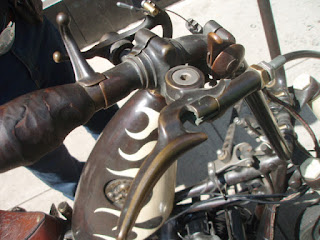 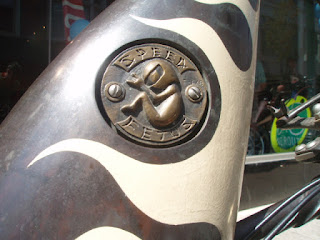 'speed fetus' had all these apparently cast pieces-levers, cranks, brackets-and a really interesting finish.  I can't help feeling it's a waste for this very high level of craftsmanship to be expended on such uncomfortable, impractical machines that say 'look at me' rather than 'let's go ride'.  But, who am I to say.  To each his own.  http://www.easternfabrications.com/
Rich and Bill Burke and I retired to New Haven's Little Italy district a few blocks away and had pizza at Pepe's, which was both Rich and Bill's second choice, but Sally's was closed.  I thought the pizza was excellent.
I hadn't ridden a Commando for ages, maybe since I sold the '74 Mk IIa Interstate I bought new at Lloyd Bros. in Hamilton, Scotland and kept for nine or so years and put 40K miles on.  Rich had to start the motor for me, as I couldn't seem to manage with my chronic right ankle.  The ankle is a legacy of a crash I had on my Commando on the off ramp of the Goldstar Memorial Bridge in Groton, Ct. in 1977, when I hit the spilled diesel fuel and slid feet first over the kerb and under the guardrail, breaking my right talus.  The ankle has deteriorated ever since, the deterioration accelerating recently.  So, this was a marker of my aging.  I'm past owning a big, kick start only m/c.  Not a big deal, really, as I can manage my 250cc, 7:1 compression ratio, Moto Guzzi Airone just fine.  And, now we have the miracle of push button staring.  So, I'm adapting to my 'golden years' just fine. 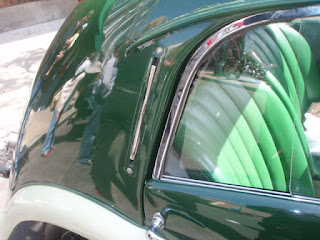 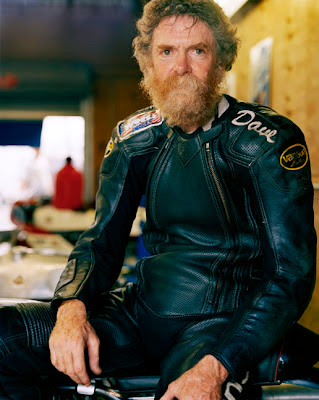 Greg Coutu, of the website Circle One One, yesterday posted an interview he conducted with me: http://www.circleoneone.com/2012/04/10/the-isle-of-dave/
The questions were posed by readers of the site. Greg asked me to provide some photos to go with the interview and I'd like to give photo credits (where possible) and captions.
The lead photo was a portrait taken at Mid-Ohio in July, 2007 by Jason Brownrigg (http://jasonbrownrigg.com/portraits/meeting-riders/) with one of those big, old fashioned cameras on a tripod with a big (10"?)photo plate in the back. 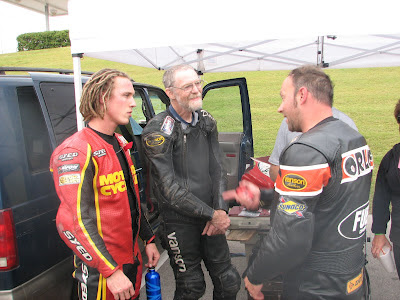 This photo was taken by Buff Harsh at Barber M/S Park in Oct. 2011.
Ari Henning, me and Wes Orloff are debriefing after the 500 Premiere race. 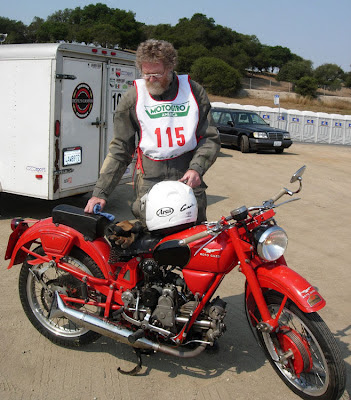 This is a photo of me with my 1953 Moto Guzzi Airone Sport at Laguna Seca in July of 2008. I was taking part in the Moto Giro America and the first day we rode 7 odd miles from the start to the race track a did a lap before proceeding on the day's ride. Yet another photo from Barber 10/'11 with me, on Ken Rosevear's Geoff Monty Special replica Goldstar next to Kevin Schwantz on Ken McIntosh's Norton Manx waiting to go out for practice. 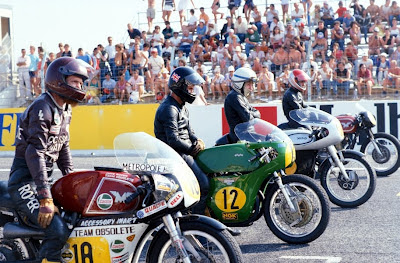 Here I am (#18) on the grid at Circuit Paul Ricard 20 July, 1986 with a couple of other former World Champions: on the Manx with the white helmet is John Surtees and on the Matchless with the red and white helmet is Hugh Anderson. That's Alan Cathcart on the #12 Paton. I beat them and a third former World Champion that day: Phil Read. Granted, I was on the fastest bike that day, next to Cathcart's Paton, which didn't finish. And, Hugh Anderson had his jet holder come adrift and he had to stop and tighten it. This classic race was held with the French GP, and Mike Baldwin was there riding Robert's Yamaha, and gave me some tips. 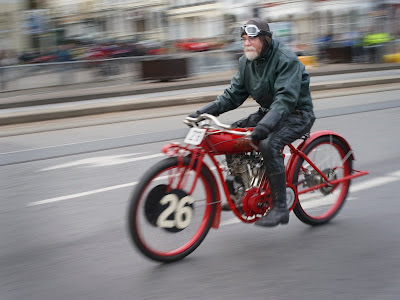 This photo was taken by Charlie Gauthier on the Prom in Douglas, Isle of Man 9 June, 2011. I'm on a replica of the 1911 Indian that finished 1st, 2nd, and 3rd that year. We were to lead the Milestones of the Mountain parade on the TT circuit the next day, but the handle bar broke at the last minute and we couldn't fix it in time. 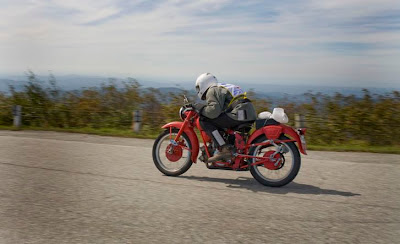 This is a photo of me on my Airone in a dead engine race down Mt. Equinox in Ma. during a USCRA Moto Giro taken by Ken Richardson
(http://www.kenrichardsonphoto.com/wheels) 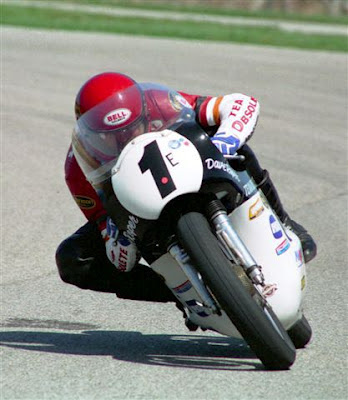 This photo was taken by Larry Lawrence
(http://www.theriderfiles.com/) at Putnam Park, In., 4/94, on a Team Obsolete G-50 Matchless 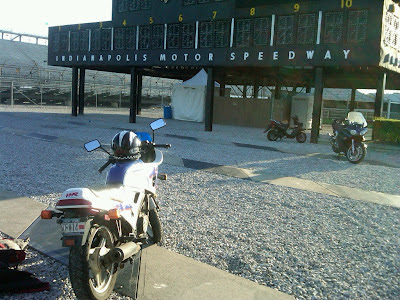 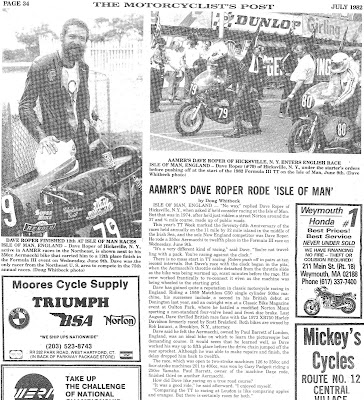 Doug Whitbeck recently sent me this copy of an article he wrote for the Motorcyclist Post in the Summer of 1982. It's hard to read, but the article tells of the first time I raced at the Isle of Man. My friend Paul Barrett set me up on a 350 Aermacchi, much like he was racing himself, and taught me the course. This was the TT F-3 race, which was run concurrently with TT F-2. The TT class was for bikes with a street based engine, but the chassis could be one-off. At that time TT F-1 was 750 four stroke, 500 two stroke; F-2 was 600 four stroke, 350 two stroke; and F-3 was 400 four stroke and 250 two stroke. The F-3 race ran from 1977-1982 and people ran Yamahas, Hondas and Aermacchis mostly.
After a little drama with the throttle cable coming adrift from the slide during warm-up, I got off OK and was having a good ride. It was a four lap race and no one would be stopping for fuel. But, as the race wore on, the bike started vibrating more and more, and I wondered if I would finish. On the last lap, as I started to leave Ramsey, the chain came off the sprocket; the front sprocket. The nut holding the gearbox sprocket on the main shaft had come adrift, allowing the sprocket to dance back and forth. The motor had a full sprocket cover, so I had to lean the bike against a wall and look for a stick. When I found a suitable stick, I was able to lift the chain up in the case and after several tries, got it on the sprocket while rolling the bike a bit. The Marshall at the corner kept coming over and asking me if I was retiring and I kept telling him 'No'. There was a little lot/driveway that I was able to bump start the bike and re-enter the race. All the vibration had cause the windscreen screws to loosen and the screen to dance around, wearing the holes in the screen bigger until they were bigger than the heads of the screws. As I left the Gooseneck, the screen flew off, except we had a vent tube from the fuel tank coiled and taped to the windscreen and this held. So, the screen was flapping around my head at the end of this vent tube. I yanked the tube off the fuel tank and let the screen go. I finished late and with no windscreen and people thought I had crashed. But, I had finished my first TT and, though the chain incident had dropped me from 5th to 12 (but not last), I was chuffed.
Posted by Dave Roper at 8:56 PM 1 comment: