Bill Burke sent me a couple of photos from the archives. I think the second one dates the first. I'm saying March '85 at Daytona. Back then the vintage races were on Wed., Amateur day. I won the F-750 race on Team Obsolete BSA Triple, but in the 500 Premiere race, riding a Matchless G-50, I tangled with someone and ran off the track coming to a complete stop, but not tipping over, before I could get going again. Kurt Liebman won on the OLS (Oscar Liebman Special) BMW. Roger Reiman crashed his KR 750 H-D in practice and broke his wrist.
Thurs. morning, I went out for BOTT practice on a TT-1 Ducati and promptly crashed on cold tires in the Dogleg, breaking a metatarsal in my left foot. After much negotiations, Dr. Dave Kieffer, also racing a Ducati in BOTT, wrote a medical release for Reiman and myself. My memory is that in the race Fri., Reiman finished 5th on an XR1000, Kiefer was 6th and I was 7th, Reiman and I bracketing our othopod. 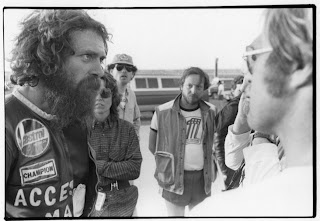 So, I think this photo is on 6 March, '85 and, if I had to guess, the fellow I'm talking to is John Ulrich. That's definitely Linda Swanson looking on and Antonio Ricciardi in the H-D tee shirt.
When I see a photo of myself like this, I think "Dude, lighten up. It's just a game." 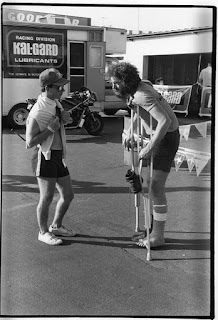 Here I am the next day talking to Paul Miles after leaving the medical center.
The price of glory.
Posted by Dave Roper at 11:21 PM