At Barber, I was introduced to Rolf Janssen by Ake Smith.  Rolf is the AHRMA Historic Production Heavyweight class champion on his 750 BMW.  I was looking for somewhere to spend Sun. night in Atlanta after I dropped someone off at the airport and before I picked someone up at the airport the next morning, and Rolf graciously volunteered.  Rolf is German born, but has lived in Atlanta 18 years.  Sun. we talked late into the night, and I got to know his story a bit.  He ask if I could identify a bike and I couldn't.  I thought some readers of this blog might be able to.
Apparently, Rolf's dad Ernst, had been fascinated with motorcycles as a young boy and had apprenticed himself to a bike shop, against his family's desire for him join the family carpentry business.
Ernst wanted to fly, too, so joined the Luftwaffe before the war.

Early on in the war, he was shot down over the Irish Sea and, after being a P.O.W. in England, was sent to Barton Fields Camp in Canada.  After the war ended, Ernst was finally repatriated to Germany in November of 1946, having spent about a fifth of his life as a prisoner.  Rolf tells me his whole family loved strawberries, but Ernst never ate them because he had to pick them as a P.O.W. in Canada.  Ernst may have been in the Luftwaffe, but he was no Nazi.  Rolf remembers that as a young boy he went to a party where the kids given Dinky toys as presents.  Rolf was given a tank and, when he showed it to his dad, Ernst said that it was nice that he was given a present, but they didn't have that kind of toy in their household, and the tank disappeared.
Ernst courted Rolf's mom, Antonie, on a motorcycle.  One time, when they were returning from a trip, Ernst stopped and told Antonie that if he was going to marry her, she had to know how to ride a motorcycle.  He showed her how and she rode him back the rest of the way.  Apparently, this was Ernst's way of proposing to Antonie and her way of accepting.
They bought the ruins of a bombed out shop, rebuilt it, and started a motorcycle dealership in Hasselt in far western Germany, some 20 Km from Holland.
They sold DKW, NSU, and Horex.
Antonie picked up and delivered parts on her NSU Pony.  This was part of their marketing plan, showing people that anyone could ride a motorcycle, you didn't have be a strapping young man.
Ernst went from being a factory trained mechanic to to being a master technician/instructor. 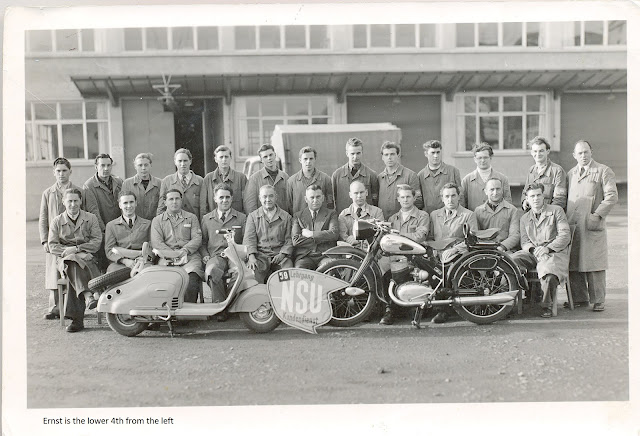 So, if anyone can identify the British single in the first and third photo, please add a comment below.
Posted by Dave Roper at 11:13 AM