The USCRA's Spring Giro this year was in Asheville, N.C.  The course was laid out by director Will Paley, and it was a fabulous one. I rode my '68 TC 200 Suzuki. 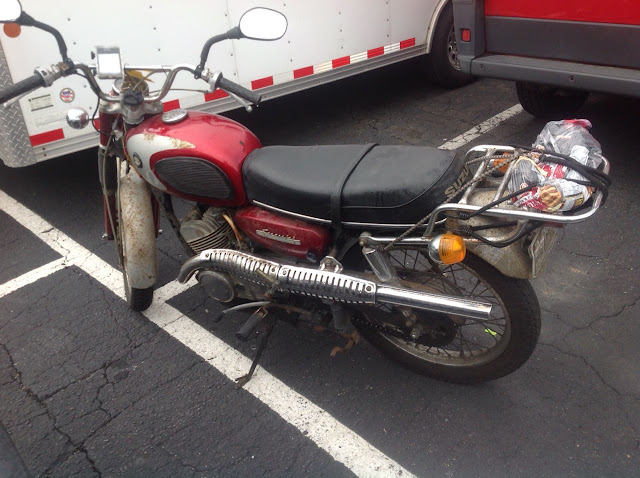 We had some rain Fri. pm and over night and, while it was dry when we started Sat. morning, it rained a bit and we encountered some fog early on.  This made the dirt sections quite greasy and a challenge on skinny road tires.  Gary McCaw may have had the greatest challenge on his Ducati Diana MkIII with clip on handlebars.
We headed east through Black Mountain to Old Fort, then north.  We sort of circled around the south side of Mt. Mitchell, the highest point in the U.S. east of the Mississippi.  Along the way, I stopped to help Carl Bachman who I saw stopped by the side of the road with his totally original 200 Bultaco Metralla.
He thought he had just fouled a plug and his plug wrench wouldn't fit under his tank.  Mine did and he put in a new plug, but then discovered that there was a lot of slack in the throttle cable, which we soon discovered was because the slide was stuck in the bore of the carb.  Carl got it out, but when he put it back, it jammed good and proper and he packed it in and called the 'sag wagon'.
Lunch was at the Ice Cream Deck in Micaville, where Tommy Cotter repaired the clutch cable on his bike in the now warm sunshine.  From lunch, we headed north through Double Island and Green Mountain.  Then I got quite lost and stopped to help another lost Giroista who's S-65 Honda had somehow lost the pin that drives the points cam off the OHC.  A local stopped and offered confusing directions and I headed off.  But, I soon lost faith and returned to the stranded S-65.
It's rider had found a nail which he was going to try to use in place of the missing pin and he used the file/hacksaw in my Swiss Army Knife to shorten it.  The nail was too small in diameter and allowed too much slop in the points cam and, while the motor fired some, it wouldn't keep running.  I left him to the wolves, and tried to find the route again. He didn't get picked up until 7:30p as he was off the route and couldn't describe where he was.  Eventually, I found a road that was on the route sheet, though I was on it from the wrong direction.  This took me south and, after another challenging dirt section, took me to Barnardsville,  then Weaverville and back to south east Asheville.
That night at the banquet, Mike Gontestky played MC and got Gary McCaw and me up there to talk about our experiences of racing at the Isle of Man.
Sunday was glorious weather and we headed north and west to Weaverville via the Blue Ridge Parkway and Ox Creek Rd., then on to Bernardsville and Mars Hill.  The roads were fabulous with great views.  Grapevine, Big Laurel, Revere, and Lonely Mountain roads was an especially delightful section.
We had a time check at the Barnard River Park, and while there, Stewart Hall, father of Jake and Rob of HCV and a local, showed Rich Hosley and me a cache of old cars and trucks across the street and slowly returning to the earth.  He had his eye of a '49 Chevy pickup there, but I though "don't get involved".  Rob and Jake showed up, Rob on a 125 Sachs Boondocker and Jake on a 175 Hercules of dubious vintage.
The Herc had started running poorly and they suspected the coil in the magneto.  They had a coil, puller and impact driver with them.  What they didn't have was a hammer, but used a rock instead to pound on the impact driver to remove the flywheel and replace the coil and they were on their way again; what's the big deal?  I got a little lost again but managed to find my way into Marshall for lunch.  From Marshall, it was south through Stoney Knob and into North Asheville with a very challenging section of loose, large diameter gravel on Beaver Dam Rd.  Nearly 300 miles (well over 300 miles with my wrong turns) of terrific roads in mostly great weather.  This may have been the best Giro yet.

Email ThisBlogThis!Share to TwitterShare to FacebookShare to Pinterest
Labels: MotoGiros