From Gingerman, I drove to Chicago and stayed with old friends and worked on my bike at Ken Kales Sports Car Store, as has become tradition.  Ken specializes in old sports cars but works on about any vehicle, including motorcycles.  He's an ex-sports car racer and avid motorcyclist.  He always has some interesting vehicles around and has excellent facilities and the shop has a very congenial atmosphere. 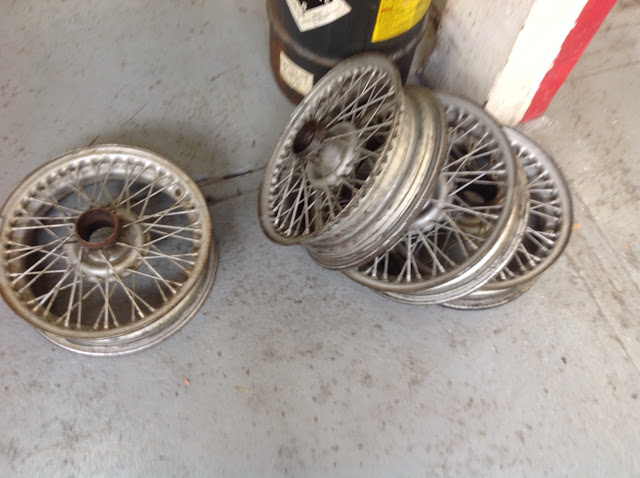 I wanted to repair the crash damage to my Sprint to a great extent to prep it for Rd. Am.  I had lost confidence in the front tire after my crash at Gingerman and I had John Stephens at Cycle Craft Motorcycles order me a Continental Classic Attack to replace the Avon AM26 that was on the bike.  I have raced several times with the Avon, pushed hard and never had a problem, but this tire was a 'take off' and perhaps had been heat cycled too many times.
While I was waiting for the tire to arrive, I repaired the front brake cable properly by reinstalling the ferrule I had removed at Gingerman, which required rearranging the adjusters.  I replaced the plug on my battery ground strap which had gotten bent in the crash and did some very basic repairs on the fairing.
I changed the rear sprocket for the higher speed of Rd. Am.  In cleaning the bike, I discovered a broken spoke in the rear wheel.  It wasn't obvious because it was broken in the nipple and was still captive, but was rattling around with no tension on it.  I didn't have a spoke, but Ken put out the word on the ChiVinMoto (Chicago chapter of the VinMoto group) list.  As has become tradition, Ken hosted the weekly Wed. night ChiVin garage crawl and, sure enough, Stephen Pettinger brought a few spokes and nipples to the event and one looked like it might work.  Stephen races in Sound of Singles 1 and Sportsman 750 and I ended up finishing less than a second ahead of him in Saturday's 350GP/Sportsman 750 race.  Thurs. I spent mounting and balancing the new front tire which arrived the day before, but didn't get to replacing the spoke as I had to load my stuff for the Fri. am departure to the track.
I got to the track Fri. afternoon and set up in a space the Aleks Kravchuk and Kenny Cummings had grabbed for me, and immediately dove into the rear wheel.  Often, one can replace a broken spoke without removing the tire, but because it was broken in the nipple, I couldn't get the broken piece out with the tire on.  When I got the tire off, I was glad I did as the the broken off piece of the spoke was backing out of the nipple through the tape and looked like eventually would go into the tube.  The nipple with the new spoke was too big in O.D. and wouldn't go through he hole in the rim but fortunately, was the same thread as the old nipple, so I just reused that.  The new spoke was too long and I had to shorten it.  The length of the threads was marginal but the spoke just tightened up before running out of thread. 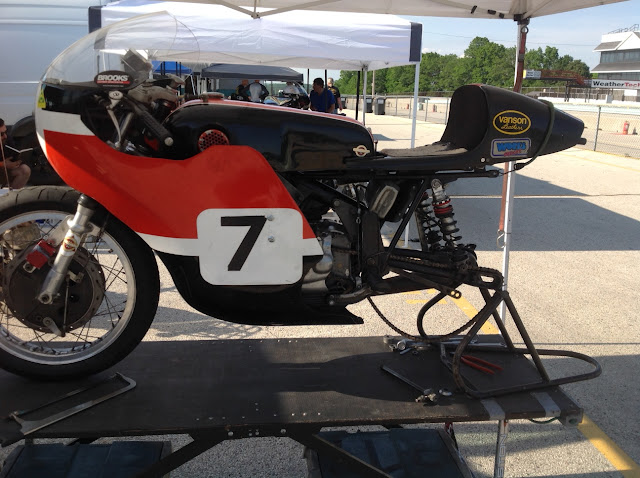 I took the first Saturday practice steady scrubbing in the new Conti front tire.  There was a strong headwind up the front straight and after the 2nd practice, I decided to lower my gearing by adding one tooth to the rear sprocket.
As at Gingerman, my 'bump up' race, the 500 Premiere was first and again we were gridded in the 2nd wave behind Vintage Superbike Middleweight and Novice Production Heavyweight in the 1st wave and 500GP and Formula 250 behind us.  Running a 350 in 500 Premiere at a horsepower track like Rd. Am. is perhaps a bit pointless and the other four bikes in the class cleared off.  Wes Orloff and Andrew Mauk again apparently had a great back and forth battle and Wes beat Andy by 0.037 seconds.  Ron Melton and Helmi Niederer also had a good battle for 3rd, though Helmi missed a shift near the end and Ron beat him by less than 3 seconds.  I was 28 seconds behind Helmi, 5th of five in class and 9th overall with 4 VSM bikes ahead of me.
For the 350GP race, we were also gridded at the front of the second wave.  In the first wave was Next Generation Superbike, Formula 750 and Sportsman 750, while behind us in the second wave was Sportsman 500 and Vintage Superbike Lightweight.  At the start of the race, Jack Parker led the 2nd wave with Paul Germain and Bobby Birdsall on his quick Aermacchi also coming by.  Parker was running his first race of the season (having not been able to start the immediately preceding 250GP because of bike problems) and had told me before the race to not expect much from him, but I knew better.  He and I got into a good dice and were soon joined by a couple of bikes from the VSL class.  Parker's DT-1 Yamaha had good acceleration, but I had top end on him.  I was baulked several times by one of the VSL bikes that was slightly out of control, but I suppose Jack might have been baulked also.  Eventually, I was able to break away.  Running in the Next Gen. Superbike class was Dale Quarterly, a very successful AMA Superbike rider of the '90s who went on to a successful NASCAR career.  He has recently gotten back into bikes, coaching some of the young guns running in the MotoAmerica KTM 390 class.  Dale and I had a memorable dice at Bridgehampton in the early '80s in a AAMRR race and I raced his father-in-law, George Vincensi's, bike several times.  Dale was riding a 888(996?)Ducati in this race and lapped us like we were tied to the proverbial lamppost.  He won the race by almost a minute and 19 seconds and a fastest lap almost 10 seconds quicker than the next best in the race.  I beat Jack by just over a second and was 10th overall.  While my change of gearing was good for drafting Jack up the front straight, it meant I was over revving on the downhill straight into turn #5 and I had to consider if I wanted to change back for Sun.
Sunday's wind wasn't as strong and my revs on the front and back straights were closer to the same, although still more on the shorter back straight and I decided to leave the gearing where it was.  In hindsight, I may have been better off leaving the tall gearing on for Sat. and using 4th gear into the wind on the front straight and not over revving so much going into turn #5.
In the 500 Premiere race, Wes Orloff had a problem on the warm-up lap and didn't start the race and Ron Melton had some kind of problem and dropped out half way.  I at least kept Helmi in sight  and finished about 9 1/2 seconds behind him.  But, Alex McLean decided to race rather than toy with Larry Poons and came by and went on to pass Helmi.  So, I was 3rd in class and 9th overall.
For the 350GP, there was a little drama on the grid as Francis Ganance pointed out to Bobby Birdsall that he had a broken muffler hanger dangling down, but grid marshall Greg Bonelli determined that it wasn't too much of a problem and let him start.  Again, Jack Parker, Paul Germain, and Bobby Birdsall beat me off the line and maybe one or two of the Vintage Superbike Lightweight passed, but they all parked it going into turn #1 and I dove underneath them to lead the second wave.
I didn't see any of the 350GP machines again, but had a good scrap with Pete Homan on a BMW, William Wells on a 400(?)Honda four, and Dan May on a BMW.  The four of us went by start/finish virtually side by side one lap.  The bigger bikes had acceleration on me, but I had a little top end on them, presumably because of my fairing.  Dan dropped back a bit, but Homan and Wells and I went at it to the end and I finished 0.122 seconds ahead of Pete with William another 0.182 seconds back.  Dale Quarterly didn't race in this race on Sunday, but we were still lapped, first by Bob Robbins on his Ducati.  Bob also had his Britten there and did some Demo laps on it.  I did my fastest lap of the weekend in this last race, almost 5 1/2 seconds faster the Saturday's 500 race, as it should be, in part because I gained confidence in the Conti front tire which worked very well.  There is some difference of opinion on how well these tires work in the wet, with some suggesting that more sipes should be added on the edge with a tire groover.  I guess I'll find out eventually. 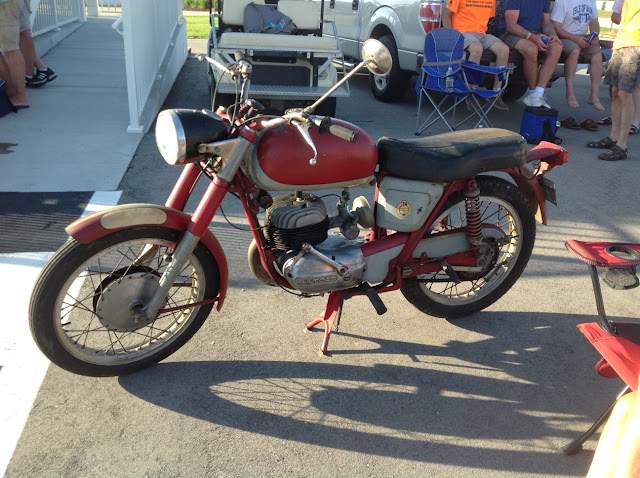