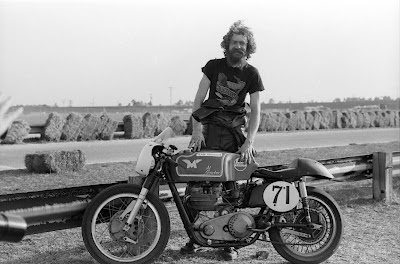 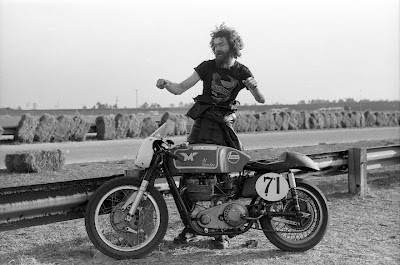 Tom Mueller has sent me some freshly digitized photos he took at the first Daytona vintage race on 3/4/81. He was working for Cycle News then and the one where I'm showing how to race a G-50 Matchless appeared in the race report then. I'm also including the race report from The Classic MotorCycle(Mortons Media Group, LTD.), which appeared in it's first issue and was reprinted for the 30th anniversary issue. This is still available from www.ClassicBikeBooks.com 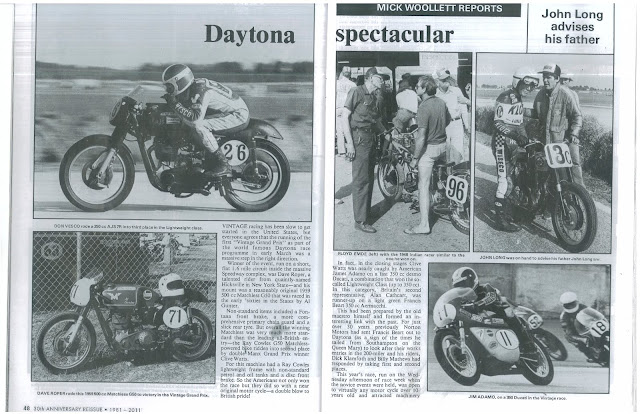 As the article points out, there was a big crash on the first lap and the race was red flagged and restarted after the debris was cleaned up. The first start was a push start and Clive Watts the double Manx Grand Prix winner, riding the Ray Cowles G-50 special, was first away with me in pursuit. While we were waiting for the restart, Kurt Liebmann was really agitated and was lobbying for a clutch start as his foot had been run over in the first start. A vote was taken, and it went for the clutch start. On the restart, Jimmy Adamo, on Reno Leoni's 350 Desmo Ducati, got the hole shot while I was second and Watts behind. I got by Jimmy and eventually Watts did too, but couldn't catch me. There was some grousing about the fact that I had a slick tire on the rear. It's doubtful that it did a lot of good as I had a 19" Michelin PZ-2 on the front. And, I had a drum brake and Watts had a disc. This being the early days of vintage racing in the States, rules were far from settled. But still, it was a good start as it was a good field with some heavy hitters like Adamo and Leibmann and Don Vesco and Alan Cathcart and Tony Murphy.
Posted by Dave Roper at 10:23 PM