June 7th I set off for back to back race meetings at Road America, in Elkhart Lake, Wi. and Grattan, Mi. the next weekend.  I drove by way of Waterdown, Ont., Canada and spent the night with my friend and great vintage racer Dean de St. Croix.  The next morning, Ken Rosevear drove down from Utopia and delivered my Dondolino motor, which he had just finished rebuilding.  For those of you who weren't paying attention, a year ago I had 'magneto failure' on this bike at Grattan when the broken connecting rod knocked the magneto off the crankcase.  After much welding and machining, a new repro crankshaft assy, a new flywheel, a new cyl. liner, and new piston a new magneto, and many new bearings, Ken got the motor squared up.
Shortly before I arrived at Dean's, my van's anti-sway bar broke and the van was all over the place.  It scared me enough that I decided I had to fix it, which is against my nature.  Dean got on the internet in the morning and located one and we drove there and picked it up.  Ken had arrived by the time we got back and, after some breakfast, the three of us installed it in the van.  This set my schedule back some and I didn't get on the road until almost noon but, without Dean and Ken, it would have been much later.  I had no trouble at either border crossing and, after the usual slog through Chicago, got to Road America about 10:30p CDT.
I immediately went back out on the same bike for the 'bump up' race: 500 Premiere.  When the #1 board went sideways and I put it in gear, the bike jumped and stalled as the rest of the grid launched.  My clutch wouldn't disengage and I had to find neutral to push it off the grid.  I thought maybe a clutch plate had broken and jammed but, when I took it apart, the plates were all intact.  I took the inner hub off and fount the nut retaining the outer shell had backed off and was hard against the inner hub preventing one from turning in relation to the other.  That clearly was the problem.  But, when I tightened the nut up, the inner still wouldn't turn in relation to the outer.  I ended up taking the whole primary/timing case off and then found the primary gear didn't want to slide off the mainshaft.  Finally, with some prybars and brute force, I was able to pop the gear off.  Evidently, when the nut backed off, it forced the outer shell inboard and the needle bearing cage had welded itself to the thrust washer.  I dressed everything up as best I could and reassembled, hoping for the best.  With the nut tightened up, there's a little clearance in there and the clutch seemed to work fine in practice Sun. morn.


In Sunday's 350gp, I managed to get by Bruce in turn #2 on the first lap, but he was up to speed sooner and back by me before the lap was over.  He would pretty consistently pass me on the front and back straights and I would pretty consistently pass him on the brakes into turn #5.  I began to think he was content to let me lead and he would just out drag me from the last corner to the finish line.  And that's almost what happened, but he passed me a couple of feet after the finish line.  I won by 0.067 secs.


Again, I immediately went back out on the same bike for the 500 Premiere race.  I had just about no hope against Wes Orloff on a 500 Honda twin and the plan was to just cruise around smoothly.  Going through the carrousel I thought to myself "the rear end is moving around a bit; this tire has a lot of miles on it."  Two turns later, accelerating out of the chicane, I spun it out and backed it into the dirt.  For the second day in a row, I went from hero to zero in a flash.  I just banged my foot a bit, and the bike wasn't too bad, but I just created a lot of work for myself in the week between Rd. Am. and Grattan.  The right clip-on was bent and torn, the shift lever was broken off, the megaphone was torn open at the rear mount, the windscreen was broken and fairing torn up, and there was dirt everywhere.

I moved to the Irving Park neighborhood of Chicago with old dear friends Terry and Sharon from college days and got to work on the bikes.  I needed welding and a call to Big Bob Burns got me set up with Fred Cousins, at 'the Bunker' that evening.  In the mean time, I pulled the cyl. head and cleaned the dirt out of the combustion chamber and lapped the valves.  Fred's day job is working at a vintage car restoration shop, Cooper Technica (Preserving the Art of Fine Mechanisms), but does bike work on the side at his Triple O Service.  We heated up and straightened the clip-on and megaphone, then he MIG welded them and the shift lever while I cleaned the carb in his solvent tank and, after much fiddling, finally got the slide to close all the way.  Fred did a great job and really saved the day.  The next day, I finished up the H-D and started to install the newly rebuilt Dondolino motor in it's chassis.  This involved pivoting the front end of the chassis up so we could slip the motor into it's cradle.  Many thanks to Terry for pulling away from tending their beloved garden to help hump the motor in. 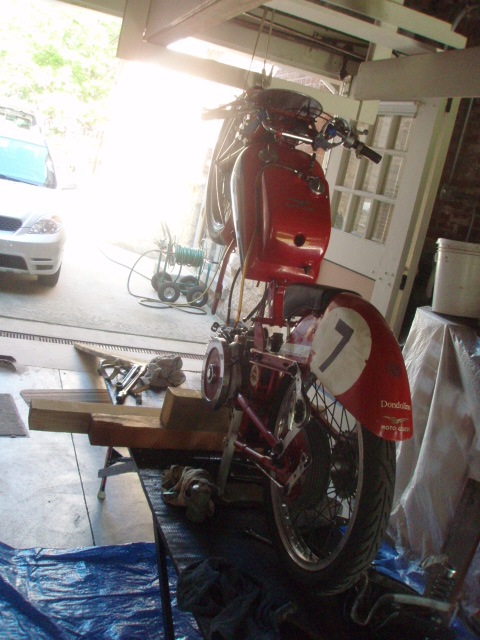 All in all, a great trip with close racing, a largely successful relaunch of the Moto Guzzi Dondolino and quality time spent with good friends.
Posted by Dave Roper at 4:05 PM