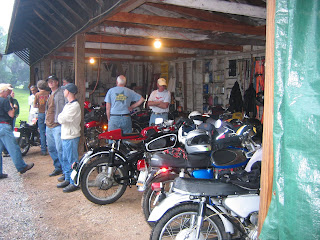 5 July, 2011 Sunday 3 July, my brother Doug and his wife Amy hosted a Tiddler Tour from their house in Haddam, Ct. We had 28 bikes participate: 7 Hondas (1 of which was a cheater), 6 BMWs (5 of which were cheaters), 5 Moto Guzzis (1 of which was a cheater), 2 Bridgestones, 2 Bultacos, 1 BSA, 1 Ducati (cheater), 1 H-D Aermacchi, 1 Ossa, 1 Triumph (cheater), and 1 Yamaha (cheater). Some of the cheaters (post '67 or bigger than 350) were more egregious than others, but no one gets turned away. Rider ages ranged from early 20's to 80. My '53 Airone Sport was again the oldest bike, but there were two other Airone Sports, a '54 and a '56.
Doug again laid out a superb route, 85 miles in the morning (east of the Ct. River)and 54 miles in the afternoon (west of the River). Challenging roads, beautiful scenery, little traffic. It started raining at the end on the morning loop and I barely got wet, but some of the stragglers got soaked. It rained through lunch and then stopped and, while some of the afternoons roads were wet, most were bone dry.
I led a morning group of Doug Boughton (CL 72), Leif Gustafson (TW 200, amusing cheater), and Phil Turkington (CB 450, beautiful cheater), all excellent riders and we had a spirited ride. In the afternoon Bob Bendix (BMW cheater) and Mike Peavey (beautiful '54 Airone Sport) and I rode together and the ride was slightly more subdued owing to the wet roads and the fact the Mike and I switched bikes for a while. This was the first major ride for Mike's Airone, which he had recently bought off ebay and, while it need a little sorting, he considers it a definite keeper.
Amy (and a few neighbors and participants) out did herself with food, libations, and entertainment including fireworks that evening. A great day.
Posted by Dave Roper at 10:23 AM