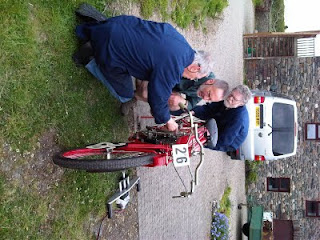 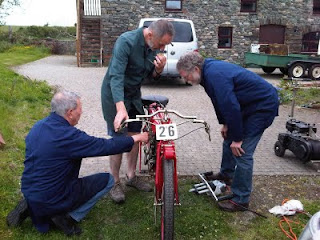 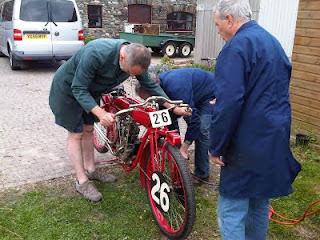 Sat. 4 June, 2011 We've found a few problems with the 1911 Indian and have be slaving away on it. We got it back together after having the gearbox apart many times and the rear wheel on and off many times. Now we have some running issues that have us a bit baffled. But, we have a top notch crew with a lot of enthusiasm, experience and talent. David Plant owns a 1912 Indian and has offer up his work shop. Richard Burch has a 1919 Indian and is a superb machinist. Peter Astell-Burt is another excellent mechanic and has been hauling the bike around. These three have put in long hours because they think it's a worthy project.
We knocked off mid day today to run into Ramsey to watch the Superbike race. Peter has a friend who lives on the inside of the circuit at the exit of Parliment Square. We were in his garden at the outside of a left hand bend where accelerating bikes were shift from 2nd to third, bucking past us not more than 10' away. What started out as a really close race between John McGuiness and Kiwi Bruce Ansty, turned into a big lead for McGuiness when Ansty dropped out on the third lap. It was his 16th TT win, second only to Joey Dunlop's 26 wins.
John Cooper, from Toronto, another member of 'Team Indian' arrived today and we're going to hit it hard tomorrow on the Indian. It's owner, Peter Gagan arrives here tomorrow, and we're hoping he's bringing the answers with him.
Posted by Dave Roper at 6:28 PM