Tim Pickering, one of the authors of the book "Franklin's Indians" and Chris Smith, of Motorsport Publications LLC ( www.ClassicBikeBooks.com ) have come up with this mini biography of Oliver Godfrey. 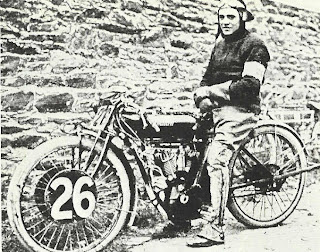 The very first winner of the Mountain Course TT, Indian-mounted competitor Oliver Godfrey, was born in London in 1887.    His dad was an artist, a painter but better known as an engraver, who seems to have departed for Australia prior to 1901. Mrs Godfrey had remarried by the time young Oliver won his TT.   He flew for England during WWI as   second lieutenant in the RFC (Royal Flying Corps), a good calling for a fast and fearless motorcycle racer.


Oliver would have been about 23 years old when he won the TT - after trying 4 times before, on a series of 726cc  Rex twins and a Triumph single. He raced the TT from 1907 through 1914, except 1912 when he had mechanical trouble at the start line.  All his TT appearances from 1911 onwards were aboard an Indian. In April of 1911, just prior to his big win, he was living with his mother and his step-dad's family in Finchley (northwest London) and was employed as a motor spindler.


Godfrey was one of five riders supported by the Indian factory to enter the 1911 TT, the other riders being a mixture of English, Irish, Scots and American in the form of Arthur Moorhouse, Charles Franklin, Jimmy Alexander and Jake De Rosier respectively.  These riders are profiled in a companion page in this blog.  The Indian team was managed by UK Indian concessionaire Billy Wells of the Hendee Mfg Co.’s London branch, and “technical advisor” was the great Medicine Man of Indian himself, none other than the Springfield factory’s chief engineer Oscar Hedstrom. 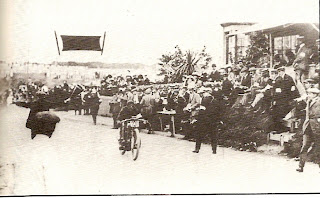 Although De Rosier and Alexander had drama with crashes, Godfrey simply rode consistently and well to finish the race without falling and just ahead of Charlie Collier (Matchless) who was second to cross the finish line.  Franklin similarly had a straightforward race and Moorhouse, although he did fall off once, was able to stay up with the race leaders.  Collier had misjudged his gasoline consumption, was forced to take on fuel at an unauthorised filling point, and so was disqualified which elevated Franklin and Moorhouse to 2nd and 3rd places.

Godfrey’s winning feat established a number of “firsts”, including the first ever clean sweep by a factory team, first TT win by a foreign manufacturer, first Senior TT win, first win on the Mountain course, and first Mountain course race record (though Frank Applebee’s Scott set the first Mountain course lap record).  In a rather upbeat TT race report reprinted in the 1912 Indian UK sales catalogue, Godfrey was described as “small in size, but a bunch of muscles and nerves and a magnificent rider”. 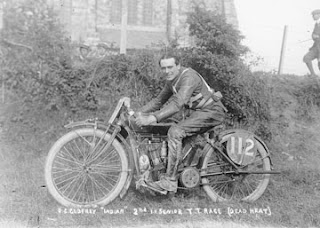 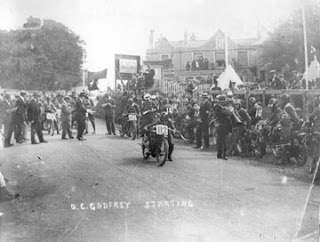 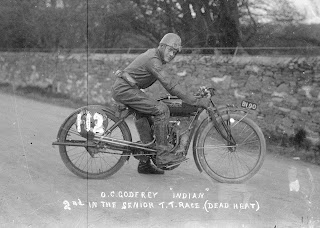 When World War One broke out Godfrey joined up to be a flier. He earned his Royal Aero Club Aviator's certificate in a Beatty-Wright bi-plane at Hendon (which is now a massive RAF museum) in January 1916. The RFC used the Royal Aero Club for pilot certification through WWI - about 6300 wartime pilots were certified through that club. In the attached a photo of him, his flying certificate photo, the wires behind him may be the structure of one of those old bi-planes. 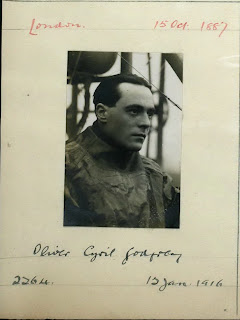 Oliver Godfrey was posted to 27 Squadron of the Royal Flying Corps which first arrived in France in March 1916 and by June was based at Fienvillers, 10 miles west of Albert in the Somme Valley and 15 miles behind the front lines.  Their “base” was simply a c
ow pasture for a runway, while the fliers and ground-crew all slept in tents.  The squadron was equipped exclusively with single-seater fighter scouts called the Martinsyde "Elephant" G100 (
http://www.apw.airwar1.org.uk/g100.htm ) - in fact, the squadron's insignia includes an elephant. The plane was nick-named the Elephant because it was big and slow to respond.

They quickly figured out that this was not a good fighter plane, but it worked well as a bomber and a reconnaissance plane because of its long range, so they were deployed on missions up and down the western front to bomb and to reconnoiter.

When the First Battle of the Somme commenced on 1 July. the squadron provided escort to other aircraft tasked with shooting down observation balloons, and was sent out to bomb German back area communications targets like railway stations and rail junctions.  Based on a list of the officers of the 27th Squadron through June 1916, Oliver was not on board yet - he must have arrived after the Battle of the Somme began, so his actual battle time at the time of his death couldn't have been more than 3 months, which might have been a good life-span for a pilot given the circumstances!

Bombing raids and reconnaissance missions were flown to places like Bapaume, Cambrai and Douai.  Their successes in bombing led to this becoming the squadron’s main role from 9 July onwards, and enemy airfields at Bertincourt, Velu and Hervilly were added to the list of targets.  The start of the Third Battle of the  on 15 September saw the squadron attack General von Bulow’s headquarters at Bourlon Chateau, followed by more bombing of trains around Cambrai, at Epehy, and Ribecourt.

In August 1916 the German Imperial Army Air Service was reorganized, and new “hunter” squadrons were created.  These became the pioneers of specialist fighter aircraft formations, soon to be universal.  The first to become operational was Jagdstaffel 2, formed at Lagnicourt.  On 27 August it came under the command of Oswald Boelcke, who was ’s top-scoring pilot at the time.  A young Manfred von Richthofen was among pilots hand-picked by Boelcke for the new unit.  By 16 September Jagdstaffel 2 had received enough of its allotted aircraft to commence operations in earnest.  For RFC units like 27 Squadron, the ir “honeymoon” period inFrance was definitely now over.

It was during a bombing mission by six Elephants to Cambrai on 23 September that Oliver Godfrey lost his life.  He was most likely shot down by Hans Reimann of Jadgstaffel 2, who was himself killed in the same engagement.  The events of that day are described in a history of 27th Squadron written by Chaz Bowyer:

"On September 22nd bombing raids were carried out on Quievrechain railway station.  One pilot, seeing that his bombs had failed to explode, proceeded to strafe the engine driver of a train attempting to leave the station quickly.  Later in the day, fifty six 20lb bombs were scattered in Havrincourt Wood, suspected of harbouring German infantry.  The following day 27 Squadron sent six Elephants on an Offensive Patrol over Cambrai, setting out at 8.30 am.  All six were attacked over Cambrai by five Scouts of Jagdstaffel 2 led by Boelcke in person - with disastrous results for the Martinsydes.  Sgt. H. Bellerby in Martinsyde 7841 was shot down almost immediately by Manfred von Richthofen (his 2nd official victory) while within seconds two more Elephants piloted by 2/Lts. E.J. Roberts and O.C. Godfrey were destroyed by Leutnants Erwin Boehme and Hans Reimann.  Recovering from the shock of the first German onslaught, the remaining three Martinsydes continued the fight despite being outnumbered and outclassed by superior German aircraft.  Lt. L.F. Forbes having exhausted all of his ammunition made one last defiant gesture by deliberately charging at the Albatros piloted by Hans Reimann, ramming the German scout in a near head-on collision.  Reimann spun to earth and his death in a crushed cockpit, but Forbes, in spite of one collapsed wing with aileron controls shattered, managed to nurse his crippled Martinsyde towards base."


At the time that Godfrey was shot down, Cambrai was situated quite some way behind enemy lines and so it is not clear what became of his body or whether, indeed, there was anything left in the burned-out wreck to bury. His memorial is Ref. IV. F. 12. at Point-du-jour Military Cemetery, Athies, near Arras.  Directions to the cemetery can be downloaded from the Commonwealth War Graves Commission website (www.cwgc.org).

Godfrey was one of 252 crew and 800 planes lost during this 4+ month campaign; the RFC lost about 75% of its men in the battle. On the ground were some 750,000 casualties. Many of the pilots coming to France at that time were relatively inexperienced, deployed to replace downed airmen as fast as they could churn them out of the training schools.

When Godfrey’s estate was settled some 18 months later, his entire estate of 1475 pounds sterling went not to his mother but to Frank Applebee, Scott-mounted winner of the 1912 TT and Oliver’s business partner in Godfrey’s Ltd, the motorcycle dealership in Great Portland Street , London.
Posted by BSAChris at 12:06 PM No comments:

Email ThisBlogThis!Share to TwitterShare to FacebookShare to Pinterest
Labels: Indian racers at the TT
Newer Posts Home
Subscribe to: Posts (Atom)
Click to read about DAVE riding a 1911 Indian V-Twin at the 2011 Isle of Man TT!