For the AHRMA race at New Jersey Motorsport Park I entered the Friday practice to test Team Obsolete's MV Agusta 350 three cylinder, which mechanic Josh Mackenzie had recently finished going through.  In the first round, the tach stopped working and I had little front brake.  Josh fixed those problems, but in the second session I lost clutch release, which was just a matter of the handlebar adjuster backing off.  With that secured, the bike went well in the third session.  Having accomplished what we set out to do of making sure the bike was sorted and ready, Josh loaded up the bike and took it back to Brooklyn. 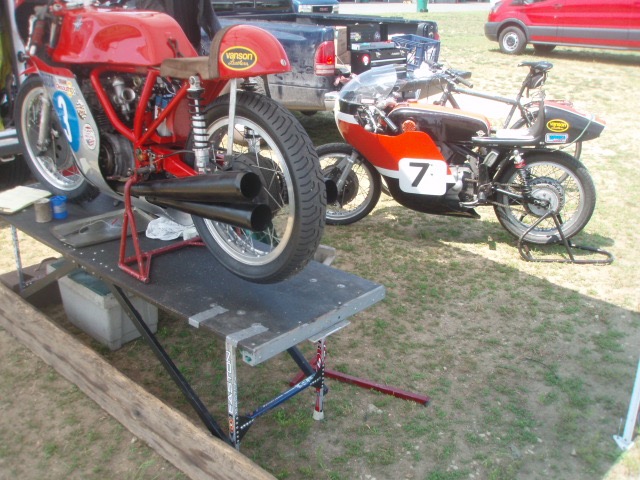 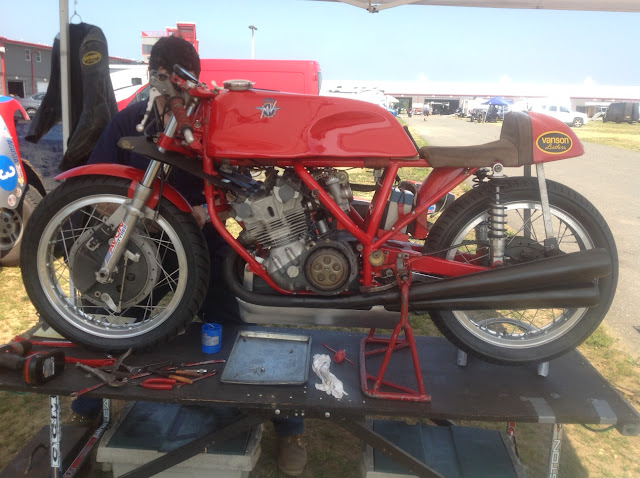 I took my H-D ERTT Sprint out for one session and it seemed good.

Sat., my 'bump up' class ran first, the 500 Premiere class, which was gridded in front of 500GP, Formula 500 and 500 Sportsman and Vintage Superbike Lightweight.  There were only four of us in 500 Premiere and Tim Joyce on Maurice Candy's Manx soon cleared off.  I chased Helmi Niederer on his Minovation Seeley G-50, but he slowly pulled away.  Tim Tilghman, Rich Midgley and Kerry Smith all came by on their F-500 Honda 350s, but Midge got a flat tire and dropped out, so I finished 5th overall.

The 350GP class was gridded behind the electric bike class with Class 'C' foot shift and Handshift and Formula 125 behind us.  It took me several laps to chase down the electric bikes and I was able to win overall, but with only the 4th fastest lap, the electric bikes peaking early, then fading a bit.
Joel Samick brought his Retro Tours to NJMP Sat.  Joel runs tours on his Twins from the '70s and he had four guys with him and they were going on to Delaware on Sun.  They were riding an XLCR Harley, a TX 750 Yamaha, a RD400 Yamaha, a V50 Moto Guzzi, and a T100C Triumph.  He invited me to join them for dinner and I ended up spending the night with them in a condo at the track.

Sun. went much like Sat., though in the 500 race Helmi didn't ride and Midge didn't have a flat tire and Mark Morrow on his F-500 Yamaha and Brad Phillips on his 500 Sportsman BMW also came past me, so I was 7th overall.
In the 350 race, I was again able to chase down all the electric bikes and win overall, this time with the 2nd fastest lap.