Calabogie is a fabulous race track about an hour west of Ottawa, Ontario Canada.  It's 3.136 miles long and has 20 turns, all of which seem to be blind, decreasing radius and off camber.  Well, thats a bit of an exaggeration as it does have a couple of high speed sweepers, but is probably the most challenging purpose built circuit that I know.  And, there's not a bump on it, which is amazing as I hear that they have winters up there.  The VRRA has been racing there for at least 4 years and this was my 3rd visit there.
I pre-entered my 350 ERTT H-D Sprint and my 250 CRTT H-D Sprint, but the next day, I discovered that the crankcase on the 250 were cracked.  I guess that's why is wasn't very oil tight and vibrated more than I remembered when I won two races with it at NJMP four weeks earlier.  So, I put the CRTT aside and put the motor in my 1946 Moto Guzzi Dondolino and took that instead.

I went up Fri. June 26th without having started the Guzzi, so when I got there, I wanted to start it right away before I committed to the entry.  The Dondolino has the oil tank on top of the fuel tank (where else would you put it?????).  I was talking to some friend as I gassed it up and then realize that I was putting the gas in the oil tank, which already had oil in it.  So, I had to drain it all out and put fresh oil in.  Having done that, it fired right up and I did a slow lap around the pits.
Sat. morning after getting the bikes teched, I went out in practice on the Dondo and immediately discovered that I couldn't shift it past 2nd gear.  My incompetent mechanic (me) had indexed the gearbox selector incorrectly and that all I had to do to fix it was take the engine out of the frame and totally disassemble it.  That wasn't going to happen this weekend in the pits, so I put the smallest rear sprocket I had on the rear and rode the 4 lap heat race in 2nd gear, which was still way too short.  The track is long enough and the race was short enough that I didn't get lapped.  It was a bit futile, but people enjoyed seeing and hearing it run and it did run fine and passed the hot tech coming off the track and now I'll be able to see how things are doing when I do take it apart.
I won the P1 350 heat, which was run in the second wave, with P1 200 behind us, and P1 Open in the first wave. finishing 4th overall by passing one of the P1 Open bikes.

I decided there was no point in riding the Dondolino anymore so I changed my Pre 50 entry to P1 500 for Sunday.  The P1 350 final was first and again I won my class and was 4th overall.  All weekend I had a slight, intermittent, and random misfire, which actually seemed more like an ignition cut out.  This seemed a little worse Sun., and after the P1 350 race, I checked over the bike looking for a loose wire or something.  I cleaned the points and checked the gap, but never found a smoking gun.  The P1 500 race was right after lunch and when I went to start the bike, there was not a pop.  I quickly disconnected the kill button and tried again, but still not a pop.  Then, I put in a new sparkplug, grasping at straws, but still nothing,  by this time the race had started without me.  I clearly did something wrong, but it always could be worse.  Better than a rod through the case. 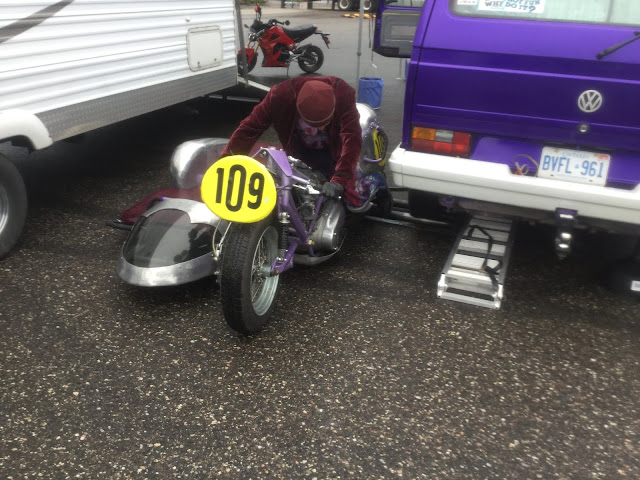