Tom Mueller sent me another photo he took at the first Daytona vintage race on 3/4/81 which he was covering for Cycle News. I'm riding a 1959 Matchless G-50. 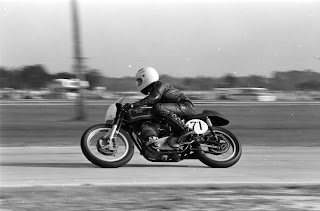 This goes with the other two he previously sent and I posted: 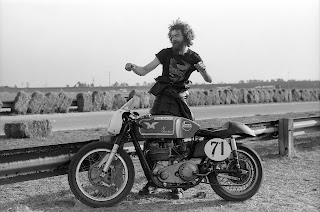 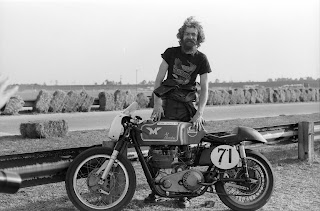 The 2013 season started for me with back to back races at NOLA and Talladega. NOLA is a new track that opened last year, about 15 minutes from downtown New Orleans. AHRMA did have a race there last year, but I didn't go to it as I could race in Quebec that weekend. It got good reviews, and was scheduled at a better time of year, so I made the effort this year. I got there a little after lunch break on Fri., but not having been there and with untested bikes, I wanted to get on the track. I took the Dondolino out first, but on the third lap, it went flat. I suspected the ignition timing had slipped, but was also concerned with valve springs. For some reason, the Magneti Marelli Tipo MLA magneto I got to replace the original one that got damaged when the broken con rod knocked it off the crankcase, seems to have it keyway in the wrong location. If I put the mag gear on with the key, the ignition timing isn't anywhere close. The gear's on a taper, so I've just put it on without the key, but evidently I didn't seat it well enough when I re-installed the mag after being rebuilt over the winter by Ed Strain in Pinellas Park, Fl. after it had failed at St. Eustache last Sept. I had also had a valve spring break in the last race I did last year and hadn't been able to find a proper Dondolino spring, which have thicker wire than the street Guzzis. Dick Miles sent me a bunch of Norton hairpin valve springs and, while they have thicker wire still, they are longer, so the seat pressure works out about the same. They are a good deal bulkier than the original springs, but I did get them on and they didn't seem to foul anything. I put the Norton springs on the intake and the original springs on the exhaust. 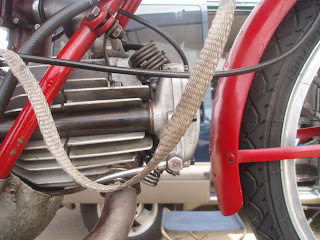 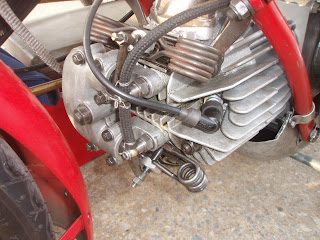 So, with the Dondolino awaiting retiming, I got a couple of sessions in on the ERTT. The track is good. It's 2.75 miles long with fast sweeping turns that flow together, very smooth and with good traction, but very flat. Fri. eve, we went to the awards banquet, which was pretty lame compared to the USCRA banquet I had been to in Jan., which was very entertaining. Sat. morning, Dick Hollingsworth notice that a bolt was missing in the engine plate of the ERTT. Then, someone noticed that the plate on the other side was broken. Then, I noticed that the boss on the frame that the plate bolts to was broken and all the other bolts were loose. We stripped everything off and rolled the bike over to Andrew Cowell. While he was welding, I practiced on the Dondolino. With the ignition timing correct, the bike ran strong. Andrew did his usual excellent repair and, with Al Hollingsworth's help, we got the ERTT back together in time to get one practice in. 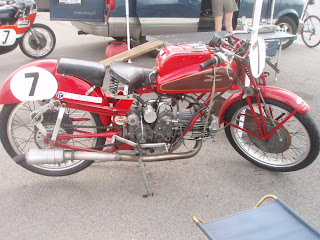 The Dondolino was up in the first race, Class C being combined with the CB160 Lemans start race. There was only one other Class C footshift, Beno Rodi on his Garden Gate Norton Manx, but there were several tank shift bikes. After the CB160 took off, Class C was started. I caught the lead CB160 by the third lap and was not passed by anyone. The 350GP class was the front of the 2nd wave behind 350 Sportsman and Vintage Superbike lightweight. Jack Parker on his DT-1 Yamaha got the holeshot, followed by Paul Germain, also on a DT-1. I was 3rd and by the 5th turn was closing up on the leaders. Jack seemed to check up a bit, which cause Paul to check up a lot, which meant I was on top of them all of a sudden just as my throttle hung up. I grab some front brake while well leaned over and tucked the front end and went sky-ground-sky-ground. I tumbled a bit, but nearly all of it on the grass and wasn't too badly beat up, just bruised. The bike wasn't too bad either: bent clip-on, puncture in the fuel tank, broken windscreen and fairing, and some dirt in the carb. Again, Al Hollingsworth helped me get the bike straightened out more or less. Sunday morning, Al asked me if I had a spare footrest. I said 'I think so; why?' He pointed out I was missing the right one, something I hadn't noticed. I did have a spare and after I put it on, Al pointed out I had put it on upside down. 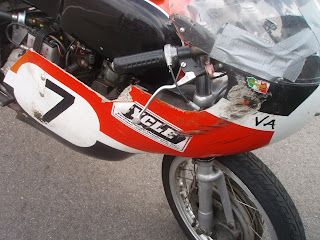 The Class C race went the same as Sat. with a 1st overall. The 350GP started the same as Sat. but this time Jason Roberts on his very quick CRTT 250 Sprint stuffed up the inside of me going into turn #4 but ran wide on the exit and I passed him back. Germain got by Parker, then I got by both of them. I came just short of catching Jereme Ragsdale, winner of the 350 Sportsman class in the first wave. It was a leisurely trip to Talladega, with a day in New Orleans checking out the Warehouse district, Garden district and Uptown. Then a day in Haddiesburg, Ms. which was a bit of a revelation, with a revitalized downtown which had a fabulous restored theater from the '20's, an impressive court house, an excellent art gallery and a restored train depot. Birmingham was next, with a trip up the tower in Vulcan Park to catch the sunset and nearly full moonrise. Thurs., after a trip to the Sloss Blast Furnace historic site, we went to the Barber Motorsports Museum and my old Arch Nemesis and good friend Chuck Hunnycutt gave us the 50 cent tour. After we shut down the museum, we drove over to the Talladega Grand Prix Raceway. Fri. I changed the gearing on the bikes and did a bit of cosmetic repair to the Sprint and mounted a windscreen Jason Roberts had brought me. 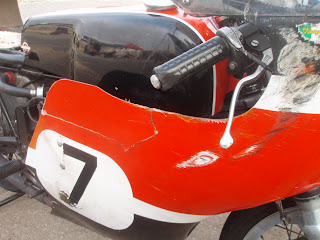 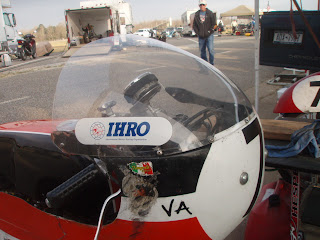 I hadn't been to Talladega since 2004 and they had changed the track significantly since then, for the better I was pleased to discover. I got in a couple of practice sessions Fri. afternoon a all seemed good other than the silencer on the Dondolino, which was falling apart, so I took the guts out of it for Sat. But, here I had some real competition in the Class C. The Hall brothers had come from Asheville, N.C. with their very potent BSA singles. Older brother Jake was riding the Class C bike, which they had recently converted from plunger rear suspension to rigid, which he said greatly improved the handling. 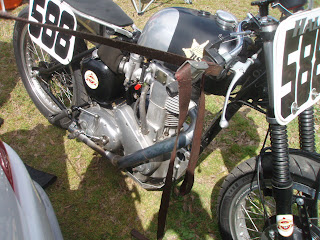 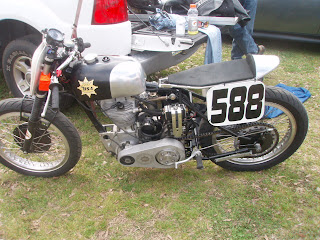 About a quarter of the time, I think I have the Dondolino in 1st gear, but don't. Sat. was one of those times and I was left at the line in neutral while everyone left. I was able to catch everyone but Jake, who was long gone. After the race, I discovered the exhaust had broken off at the silencer housing, so I remove it for Sun. 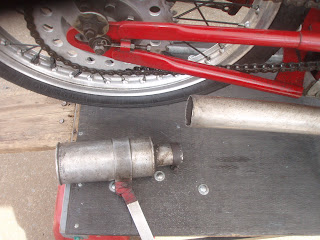 At Tally, 350GP was the third class on the grid behind 500 Premiere and 500GP, but all leaving in one wave. Paul Germain didn't come to Talladega and Jason Roberts had blown up his fast motor at NOLA and only had a stocker here. So it was just Jack Parker that I followed for a couple of laps. His DT-1 is very fast and I had nothing on him motor wise. But, I got by him on the brakes and was then able to open up a bit of a gap. A front came through Sat. evening and it rained pretty hard over night. Is stopped raining in the morning, but the track was wet for practice. By the time the Class C race came, the track was pretty dry with some damp patches. I made sure I was in gear and I got the hole shot and held Jake off for a lap or so. He came by, but a couple of corners later I was able to get back by. I thought he'd be right back on me, but it took a lap or so. Apparently, he had run off the course. He did get by after we went through a corner side by side virtually leaning on each other. He then inched away. He told me after that it was the best race he'd ever had, which sounds like a bit of hyperbole for someone who's been racing as long as he has, but it was good fun. It started raining again and several people packed up and left including most of the 500 Premiere grid. But, it stopped raining again and was pretty dry for the race. At the start, out of turn #1, Tim Joyce leading the 500 Premiere on Maurice Candy's Manx apparently had magneto failure and pulled off. This meant, when I got by fast starting Jack Parker, I led the race overall. I held this position until the last corner of the last lap, when Alex Mclean on Bob McKeever's 500GP Manx passed on the inside. This was a line that was never going to work as one needs a really late apex there and I braked later and pitched it in. I thought I was clear but felt a bump and held him off to the checker. I asked him after if we had made contact and he said indeed we had and it was a bit sketchy for him. But, he admitted he had been foolish and that he should have just waited and gotten the good drive out of the corner and out dragged me to the line. Anyway, no harm done and we both won our respective classes. So, quite a good start to the season with five wins and two 2nds and a not to serious crash.
Posted by Dave Roper at 12:00 AM 1 comment: