The week after Shannonville, I made the annual trek to Road America, Elkhart Lake, Wi., with Grattan, Mi., the next weekend.  Jamie Waters generously offered me the use of his ex-Bruce Yoximer Seeley G-50.  The bike had last been raced at Barber M/S Park in 2011 by Todd Puckett.  In fact, I was racing Ken Rosevear's Goldstar and Todd and I went back and forth a bit.  I finished ahead of Todd on Sat. and Todd finishing ahead of me Sunday.
So, Todd had a good ride on the bike the last time it was raced, so it must be ready to go.  I talked to
Todd, and through the mist of time, he remembered it being in good shape.  Well, not exactly.  For one thing, the gearing had to be changed.  When I picked up the bike at Jamie's space in Jersey City, while checking out what gearing was on the bike, I noticed what looked like a crack in the frame behind the swing arm pivot on the drive side.  But, the light wasn't good and I couldn't be sure.  When I got to Rd. Am. the next day, it was clear there was a crack. 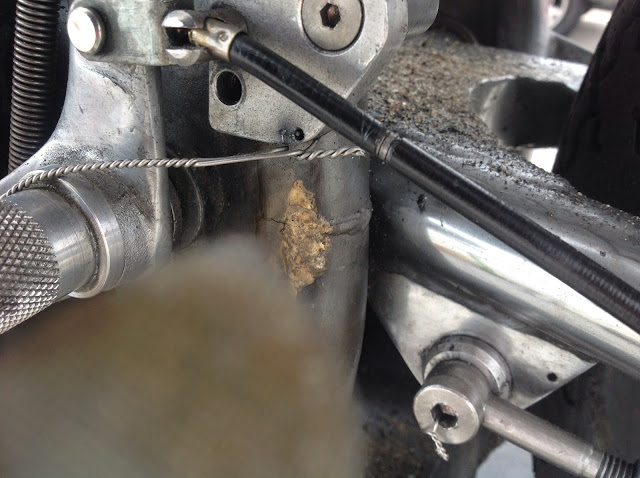 I talked to Randy Illg of Framecrafters and he agreed to take on a repair.  This involved taking out the swing arm, stop drilling and beveling the crack, TIG welding that portion that wasn't already brazed, brazing the rest, then fitting and brazing a gusset to go over the whole shebang. 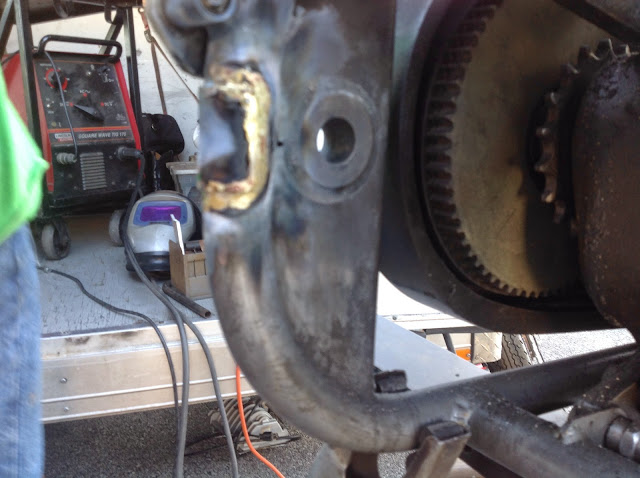 Then I changed the sprockets front and rear, which involved removing the clutch.  Todd had race the bike at Rd. Am. in 2011 also, so I had notes of what gearing he ran then.  I changed the oil in in the bike and charged the Scitsu tach over night.

Saturday's first practice I spent feeling out the old, but little used tires, and generally getting used to a new bike.  It had probably been 20-25 years since I had ridden a Seeley.  I like the way it steered, especially on turn-in, and the motor seemed to have a broad power band, though it was a little hard to tell as the tach didn't seem to be working properly.  The needle seemed to stop climbing while the revs continued to rise.  In the second practice, I got down to competitive lap times and the tach seemed to be waking up after it's 2.5 year sleep.
The small 500 Premiere field was reduced more when Larry Poons didn't make the start, this race being back-to-back with the 250 GP, which he had just run.  And, Helmi Neiderer 's NYC Norton prepared Minovaton Seeley G-50 started running poorly in the SOS2 race and they weren't able to figure out the problem in time(eventually they found a broken wire making intermittent connections).
I led exiting turn #1, but soon Chris Spargo came by on his  RD400 based Formula 500 machine and disappeared.  Kenny Cummings had his chain come off and jam between the rear sprocket and the swing arm.  This  mangled the sprocket studs, the chain adjusters and the  swing arm, putting this bike out of commission for a while.  Ron Melton finished just under 10 seconds behind.
Sunday, I blew off the first  practice, but in the second, Ron and I went back and forth a bit setting up the promise of a good race.
In the race, again I got the lead by turn #1, and again Chris Spargo came flying by and disappeared.
This time, Ron Melton'schain came off, but his jammed between the sprocket and the hub and he was  able to limp back to the pits.  So, again I won the 500 Premiere class and was second overall.
I very much enjoyed riding  Jamie's Seeley G-50 replica and was looking forward to racing it at Grattan.  But, I discovered that the crack in the frame was returning and after consulting with Jamie, we decided that the frame should be stripped and repaired properly in the shop.

It's been a long time since I've posted, for a variety of reasons, some of which I'll get into later, but I'm going to try to do a quick overview.
Over the May 31/June 1 weekend, I drove up to Shannonville, Ontario, Canada for the first VRRA event of the year.  Len Fitch, who's 1972 TR-3 Yamaha I rode last Sept. at Ste. Eustache, asked me if I would like to ride it in all four VRRA events this year.  I can't make the Mosport round, as I'm committed to go to the IOM and do the Lap of Honour in the 'Classic TT'.  But, I committed to the other three events.

I hadn't been to Shannonville in almost 12 years, so the first practice was spent re-familiarizing myself with the track.  It being flat and without any really blind turns, this didn't take long.  Only turn # 2 you can't really see the exit when you enter it and it is very bumpy.  Len had ordered new rear shocks after I had suggested the worn out Konis weren't optimal at Ste. Eustache, but they never arrive and at the last minute put on a set of stock RD350 shocks, so the bike shook it's head pretty hard in turn #2.  After the second practice, I decided the bike was geared too tall and Len geared it down.
I entered two classes and first up was Period 2 Heavyweight which was run concurrently with Middleweight Production in Saturday's 6 lap heat.  I got in the lead pretty quickly and won overall, though Brent Waller on his 550 Honda had a faster fastest lap.
Len dropped the needles for my second heat for the GP class.  This class is for any factory built two stroke race bike and is divided into Modern and Vintage, Vintage being up to 1989 or so.  The Modern are then divided in Lightweight (up to 125) and Middleweight (up to 250), and the Vintage divided into Heavyweight (750), Middleweight (500) and Lightweight (125).  There were no HW. Vint. entered, so the MW Vint. We're gridded behind the Modern bikes.  Two MW Modern bikes cleared off, and we had a good scrap with a couple of '89 TZ 250s and  a Honda RS125 (LWModern) that got by.  I ended up 6th overall and 3rd Vint., but we considered the moral victor, being the first aircooled, twin shock bike. 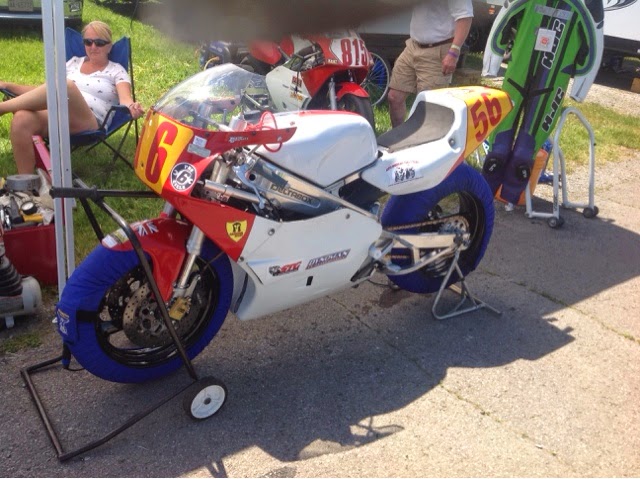 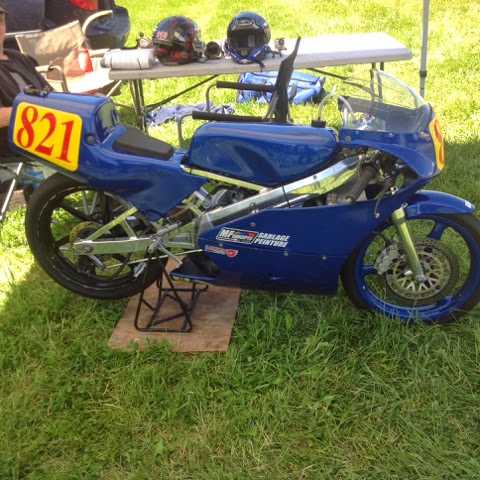 Sunday's ten lap finals went similarly with me leading from the pole in P2 HW and never being headed, though again, two bikes had a faster fastest lap, but clearly not enough of them.
In the GP race, the same two MW Moderns cleared off and I scrapped with a couple of the MWVint.  A MW modern, who I had beat in the Heat came by on the straight, but I braked way later and got back by.  This pattern went on for a few laps until he figured out he could brake much later  and he pulled away.  So, I again ende up 6th overall and 3rd Vint., this time keeping the Modern LW at bay.  And again, the moral victor with only bikes at least 15 years newer in front . 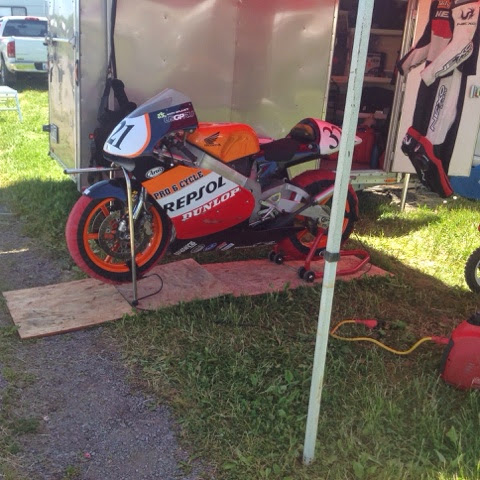 A modern RS250 Honda, overall winner of the GP race
Posted by Dave Roper at 6:24 AM No comments: