This past weekend, I flew to New Orleans to race in the AHRMA event at NOLA.  The plan was to race the CT-1 Yamaha built and prepared by Dennis Latimer.  I raced this bike at Barber last year and it was a little rocket.  Dennis had sent the crankshaft of this and it's near identical sister bike to a specialist in Arizona to be balanced and never got them back before he event.
But he was able to borrow the crankshaft from Lanny Henderson's similar bike as Lanny has decided to retire from racing.

When we got to the track Friday, Dennis told me the bike had the same gearing as at Barber and I thought that would be way too low for the longer and quicker NOLA circuit.  So, I took a survey of a number of racers who had raced their same bike at both circuits and the consensus was the NOLA gearing was about 107% of Barber gearing.  This meant changing from a 16 to a 17 tooth front sprocket.
I signed up for the afternoon practice.  We had some problems getting the bike started for our first session and I got out on the track late. I took a lap to refresh my memory of where the circuit went and started to wick it up on the next lap when I saw had the red flag at turn #3.  The session over, we learned very little.
We made sure we were ready for the last session and I got in five good laps.  I had some trouble making the gap between the gears and wasn't reaching redline at the end of the straight into turn #1.  I got a good plug chop which indicated that we could go one leaner on the main jet and we went to a rear sprocket with one tooth more.  But, Dennis' crew, which included Bart Winters, son of the legendary Leroy and nephew of Robert Winters, found a crack in the frame.  Dennis didn't think it was that significant and didn't want to do a bodge repair that would complicate a proper repair back at the shop.  But, when we found a second crack in one of the motor mount tabs, the decision was made to take the bike to Framecrafters and Randy Illg TIG welded the cracks after we prepped the joints.  So, we were ready for Saturday morning practice.
With the shorter gearing and leaner jetting, the bike started to go really well.  But, I realized that things really started to happen between 11 & 12,000 rpm.  I asked Dennis if the crank could live with this and he said yes, so I told him to put yet another tooth on the rear sprocket, bringing the overall ratio to almost where we started.
In the second (and last) practice the bike was really flying.  It's extremely fast for 175cc, handles superbly and has good brakes.  If it had a closer ratio gearbox, it would be just about ideal.  On the last lap of the last practice, approaching turn #3, I down shifted then downshifted again and the rear wheel locked.  The back end wagged back and forth a couple of times before I could get the clutch in, but luckily I was going in a straight line and not leaned over..
Dennis pulled the head when we got it back to the pits and the bore looked fine.  When he lifted the cylinder, we could see that the left flywheel was blued and scored.  Bart could wiggle the left end of the crankshaft up and down about an inch while the flywheel didn't move at all.  Evidently, the shaft had broken off the flywheel.  The bike was done for the weekend.

When the Hollingsworth H-D crew heard about this, they asked me to race their 350 Sprint in the 350 GP race.  Don Hollingsworth had been scheduled to ride it in this race, but he said he could use his short stroke 250 instead. 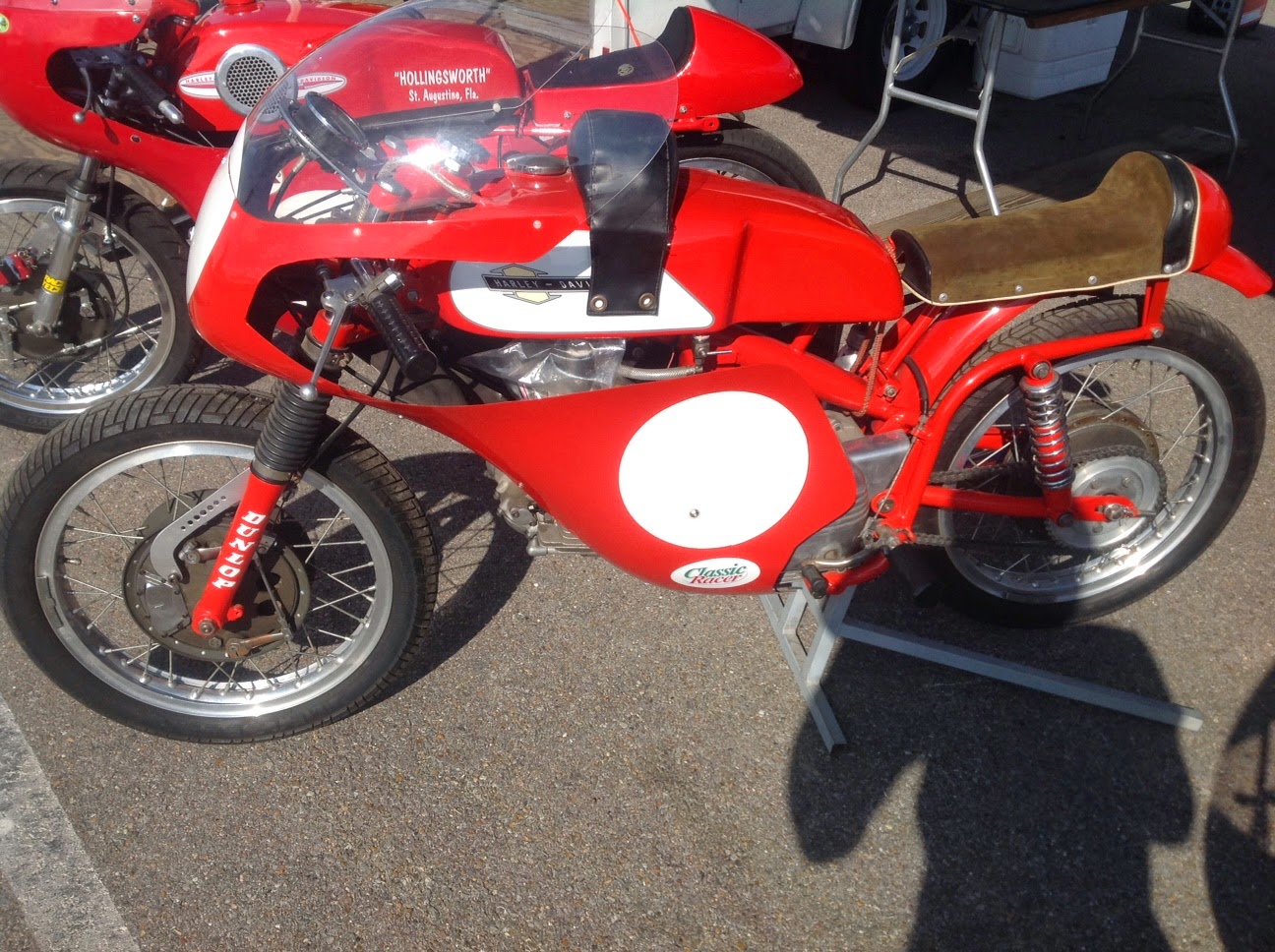 I was able to change my entry from 200GP to 350GP but, with practice over, my only chance to familiarize myself with the bike would be on a 'scrub' lap on the warm up lap of the first race, which went fine.  Don rode the short stroke 250 in race two which included 250 GP, but it broke.  Older brother Albert, nephew Dave, and Jerry Masters got it up on the bench and found that a valve spring retainer had failed.  The valve hit the piston and was bent, but there was no other damage, so Al went to work pulling the head and replacing the valve and retainer.
Don took the 250 long stroke wet clutch sprint out in race five, which included the 200GP, for which it was eligible and was having a good dice with his old sparing partner, Denny Poneleit, when Don's Sprint stopped with broken points.  Al just finished getting the 250 short stroke together as they were making the last calls for race six, which included the 350 GP.  Don was late getting back on the crash truck and missed the warmup lap and went directly to his grid, but stalled the bike turning it around and had to push start it on the grid.  Meanwhile, my warmup lap went smoothly and I lined up in pole position for 350GP, being Class champion, behind the 500 Premiere and 500GP grid.  I got a fair start, but Jack Parker and Paul Germain, both on quick DT-1 Yamahas, shot ahead.  At first I thought there would be no catching them as they engaged in a great dice but, as I became comfortable with the bike, I saw that they weren't pulling away.  The Sprint was excellent with a broad power band, superb handling and only OK brakes. After a few laps, I saw that Jack and Paul were coming back towards me.  On the 6th of 8 laps, I out braked Paul into turn #1, then was able to ride around the out side of Jack in turn #6.  So, I led the class taking the white flag signifying the last lap and carried that lead to the checkered flag.  Paul apparently passed Jack on lap seven and took the white flag first, then Jack got back ahead and took the checker first.  But, Paul was awarded 2nd place because a dog had gotten loose and ran down towards turn #1 and a red flag was thrown after some, but not all, had received the checker and therefore they reverted the scoring to the previous lap.  This also effected the 500 Premiere results with Kenny Cummings taking the checker first but Ron Melton given the win as he was leading at the white flag.
Dick Hollingsworth, Don's twin brother, took the 350 out for the Formula 250 race and it dropped a valve and made a right mess.  As talented and well prepared as Al is, there was no fixing this bike this weekend. 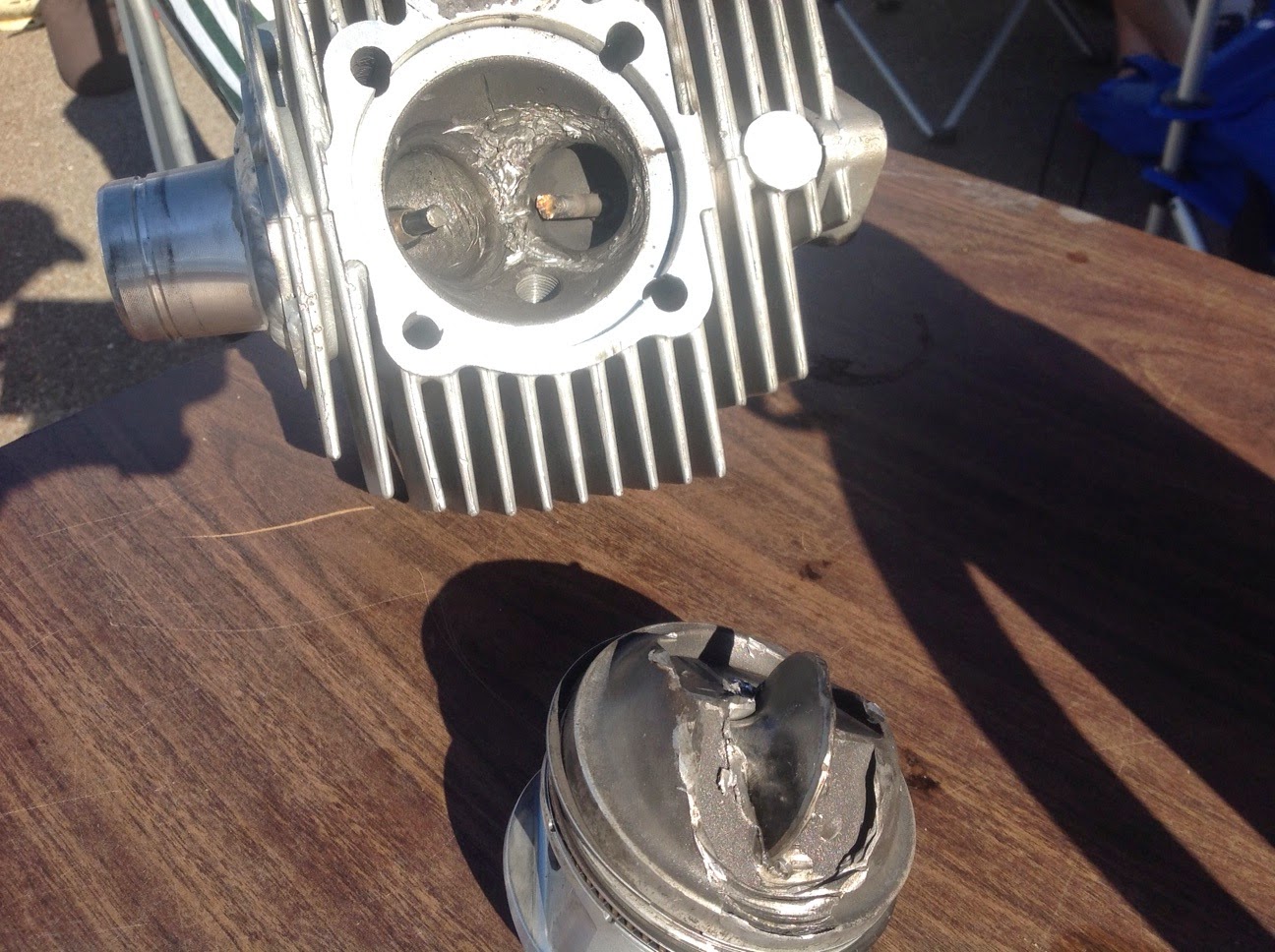 Dick was blaming himself and there didn't seem to be anyway we could convince him that it wasn't his fault, he just happened to be on it when it was time.  Dick declared that he was never, ever racing again, but we've heard that before.

In a fit of irrational exuberance over my win in the 350GP, the Hollingsworth clan decided that I should race the 250 short stroke in Sunday's 350GP and, in fact, since the 250 GP race was first, I should race that, too.   I had raced this bike a couple of times notably at Roebling Road last year where I had a great dice with Paul Germain and managed to beat him by 0.043 sec.  This is the same bike that Don used to win the 1968 Daytona Novice race at record speed, the last time a four stroke won the Novice race.  In Sunday's first practice, I did a few laps, then it made a bad noise and stopped.  Al quickly determined that it was just the ball on the end of the aluminum pushrod that had broken off, an odd failure that none of us had seen before, perhaps somehow related to the retainer failure the day before.  It was just a matter of putting a new pushrod in and we were in business again and I went out for the second practice.  It's fast but, for some reason, it chatters like crazy and it seems that the only way to stop that is to get on the gas.  Many people were talking about how much bumpier the NOLA track has become, but I hadn't really felt it on the CT-1 and the 350 Sprint.  However, when I was stopped out an near turn #6 with the broken pushrod, I could see all the bike bouncing through a big dip there.

We started the 250GP race much like Saturday's 350GP, with Jack Parker and Paul Germain shooting out in front and me slotting into third.  Initially they didn't pull the big margin on me as they had Sat., and I thought that this was doable.  As we approached turn #6, the bike started to chatter badly and I opened the throttle to settle it down.  But, perhaps I did this just as the bike was unweighting from the dip there and the back end snapped sideways.  I went down on the low side but, when I hit the dirt, I tumbled and landed on my head.  I was not anxious to get up and took my time.  I was surprised that the race wasn't red flagged as I was in an impact zone, so when the last bike passed I crossed the track to the inside of the corner.  Nothing broken, but my upper back/neck are still sore.  So, the weekend was a classic case of Hero to Zero.  That's racing.