For 2014, I competed in 13 different events, missing two events due to my late June street bike accident.  The 13 events were at 13 different venues, two of which I hadn't been to before: Phillip Island and the New Jersey Motorsports Park Lightning Circuit, and it had been almost 12 years since I had been to Shannonville.  I entered 54 races and started 50 of them, all of the non starts being mechanical issues from as minor as a wire pulled off the coil to as major as a dropped valve.  I did this on 18 different bikes belonging to 15 different people, the most I've ever raced in one season.  I got 22 wins, 6ea 2nds, 13ea 3rds, and 1ea. 4th, 5th , and 6th.  I had 6 DNFs, three of which were crashes plus one practice crash.  This is a little more than average, but fortunately, none of them stopped me from racing the same day.  In addition to this, I did the Lap of Honor parade at the Isle of Man, a Tiddler Tour, a Moto Giro, and a Pewter Run.  Another busy, successful year (with a little bump in the road in the middle).
Posted by Dave Roper at 8:30 PM 2 comments:

Because of the problem with the cracked frame it was decided that it would be better to not ride the Seeley G-50 at Grattan.  So, I went to the track with no ride, but after dragging my pitiful self around with a hang dog look on Fri., Trish Damon offered me a ride on her CB175 Honda.

Trish's Honda was quite stock and not super quick, but worked fine.
250GP ran with 500 Sportsman, Pre 40, and Formula 125.  Francis Ganance's freshly rebuilt 250 was running very well and he was riding very well, and he finished 5th overall behind four 500 Sportsman  bikes.  Trish's bike was no match for Lorraine Crussell's 175 Honda, and Lorraine was also riding superbly and I finished almost a minute behind her, 13th overall and third in class.

Don Drake's 350 Ducati is a short stroke, i.e. a 450 top end on a 250 lower end, and the more I rode it, the more I realized it wanted to rev and I kept lowering the gearing.  Come the race, Francis Ganance was bumping up with his 250 Ducati.  He got a better start than me and I got balked a bit by the Vintage Superbike Middleweights, who out dragged us to turn # 1.  Not wanting to lose touch with Francis, I tried to dive under Alex Cook's 850 Guzzi in the turn # 10 'bus stop'.  I thought I was by him, but we were on completely different lines and we collided.  I went down and, while Alex didn't, I knocked the seat off his bike, and he couldn't continue.  I banged my big toe and pinky, but was otherwise OK.  Don and his crew kicked the Ducati straight and Alex was able to remount his seat, so we were both ready for Sunday.

This bike was quite different than Trish's.  It shifted in the opposite direction as it just had a reversed shift lever while Trish's bike had a linkage.  This was more awkward shifting and the riding position was awkward for me, too, but the bike was faster than Trish's.

But again, not as fast as Lorraine's and Lorraine briefly got ahead of Francis on the first lap.  They both steadily pulled away from me with Francis finishing 5th overall again and me this time less than half a minute behind Lorraine in 10th overall.
Having geared Don's Ducati down again, I thought I might be able to make it a race with Francis in the 350 GP, but it would require using the draft of his very quick 250, and on the first lap, I missed some shifts and lost touch with him.  I finished less than 3.5 seconds behind him, he in 5th, me in 6th overall.
all in all, not a bad weekend for having arrived with no ride. 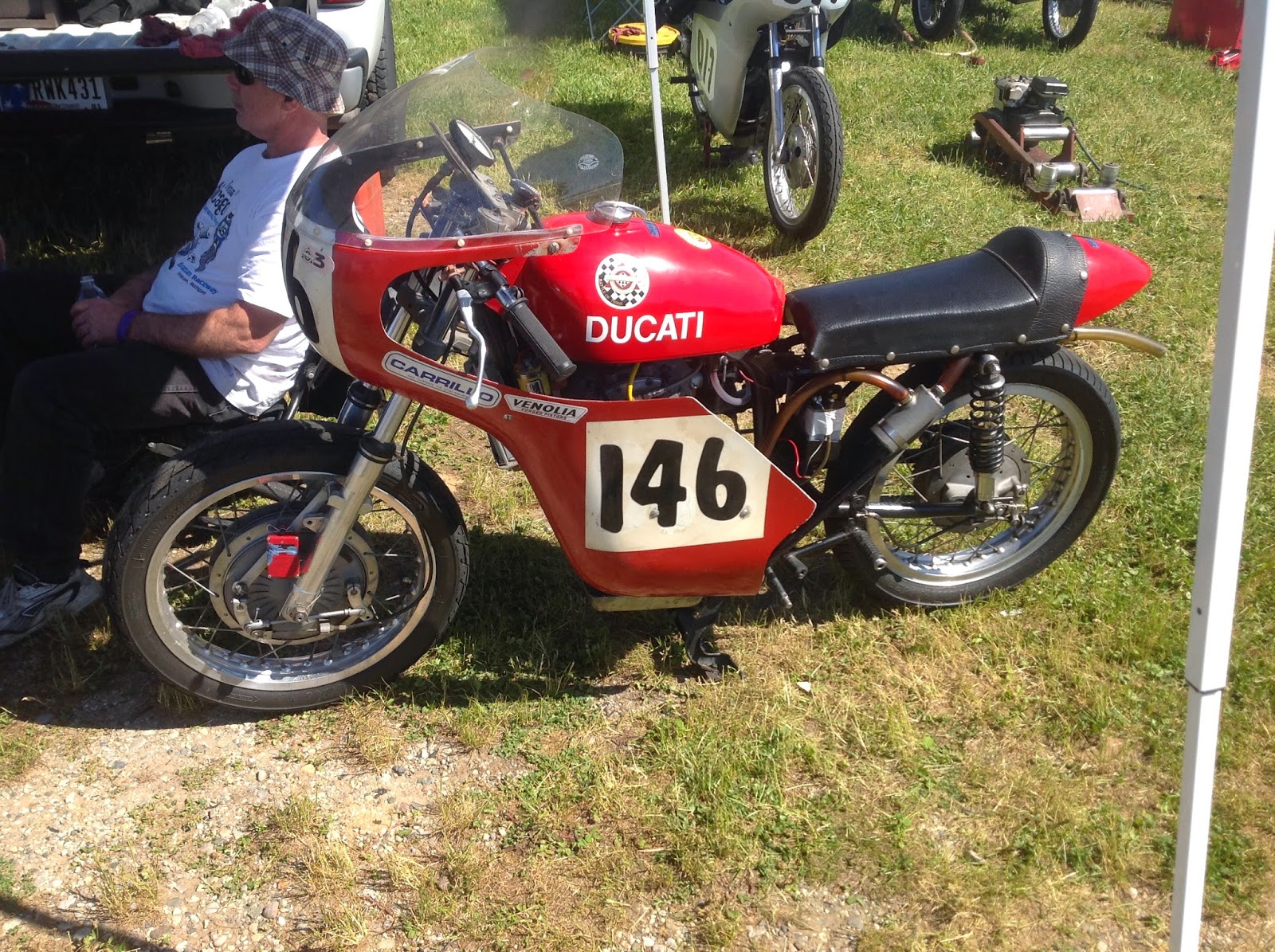 Steve Pieratt picked up this beautifully crafted twin engine Bonneville on his way to Grattan. 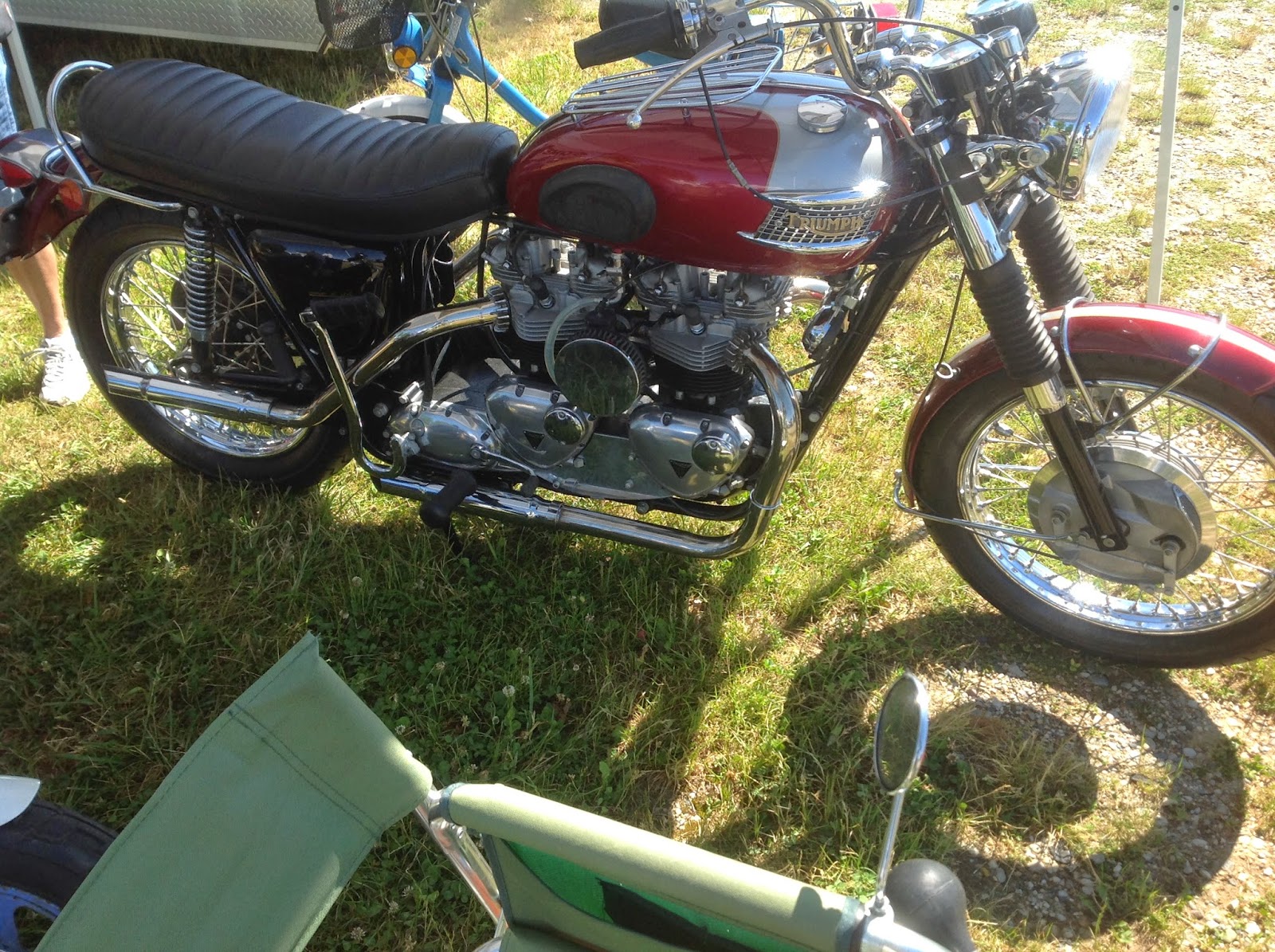 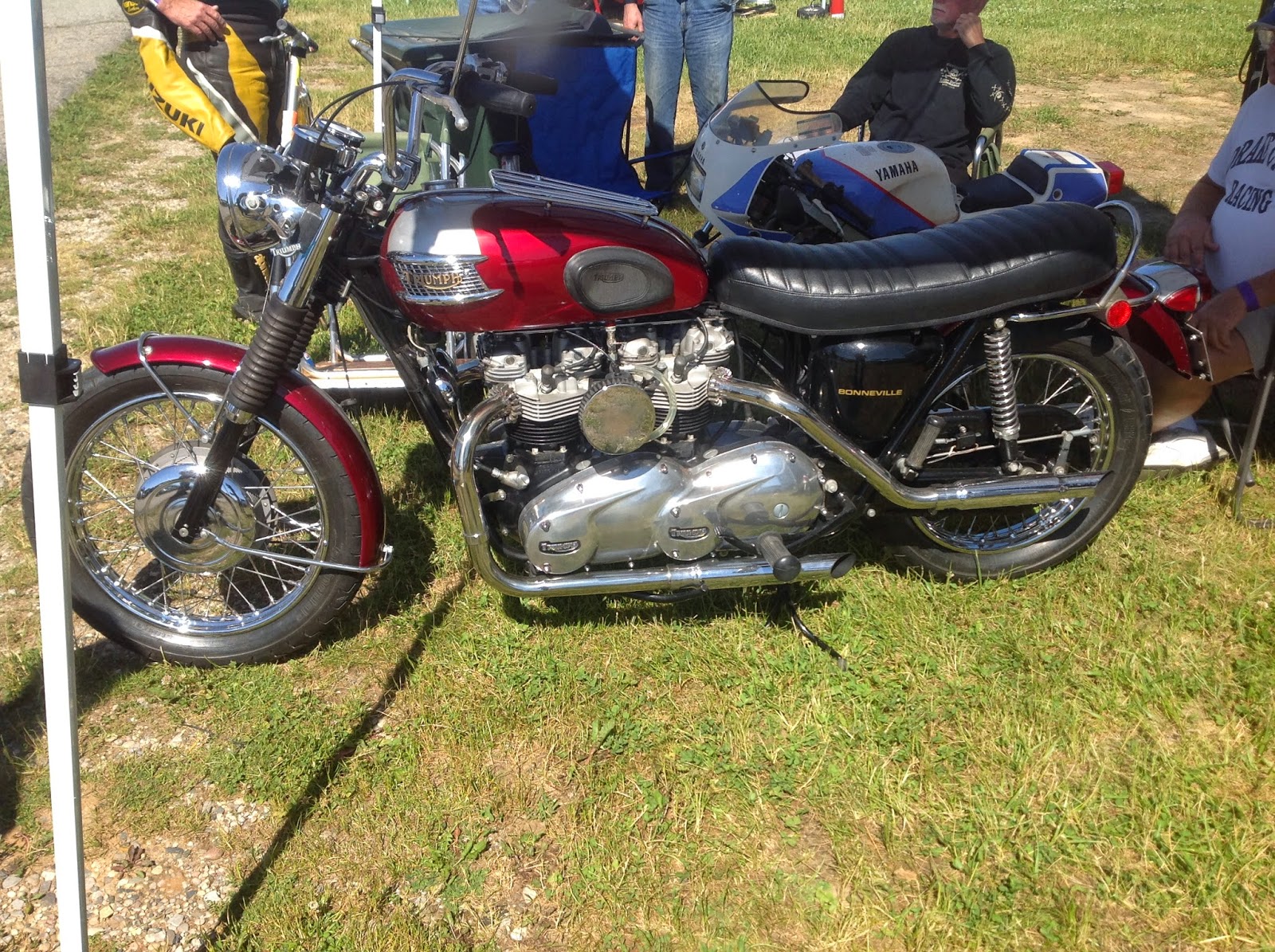 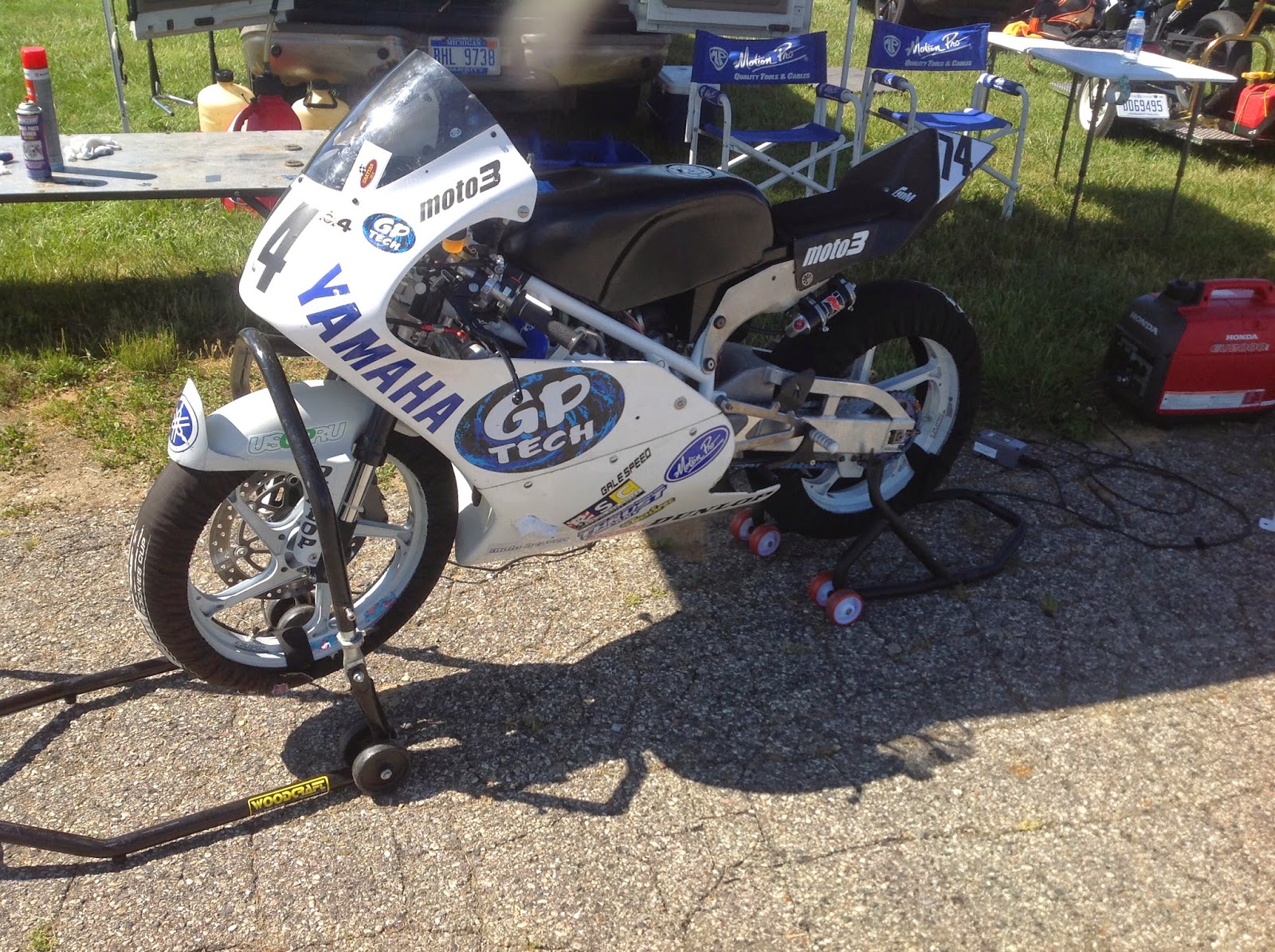