It was up to Mosport, Ontario for the first time in three years.  For the last several years, the VRRA Vintage Celebration at Mosport has conflicted with the Classic TT/Manx GP, but this year there was a week's gap and I was able to do both.  The Vintage Festival is always a great event and this year, with perfect weather, there was perhaps a record entry with over 200 riders and over 400 entries.

I had picked up my 350 Sprint ERTT motor from Bill Himmelsbach, who had replaced the broken and damaged gears with a mixture of new repro and used OEM, on my way back from the MotoGP at Indy, and installed it in the chassis the next weekend. 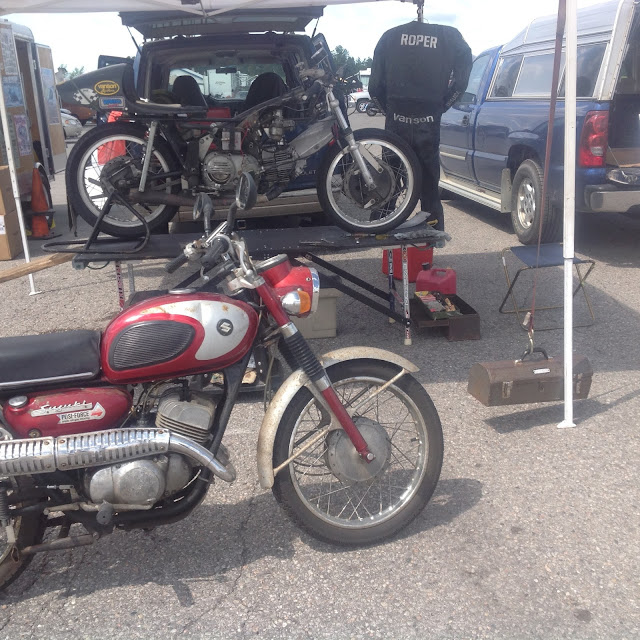 Sat. morning, I had some trouble starting it for the first practice.  Mosport (or Canadian Tire Motorsports Park as it's officially known) has a big, long hill in the paddock, which is great for starting.  I flooded the carb and pushed it down the hill, but it didn't fire.  So, I tried it again; still no go.  So I flooded it some more and tried again; no good.  I flooded it a third time and still no fire.  Now I'm approaching the bottom of the very long hill.  I realized now that I must have over flooded it and I turned off the fuel taps and opened the throttle all the way and pushed one last time and at the last moment, it cleared out and fired up.
The VRRA just divides practice for solos into Slow, Medium, and Fast, with the riders deciding which group they want to be in.  There had been some admonition that everyone shouldn't choose Medium as the default, as it tends to get very crowded.  That, and the fact that Medium goes out first, followed by Slow, then Fast, caused me to choose Fast.  But, these days there are some very, very fast 'vintage' bikes--GSXRs, 888 Ducatis, and 2000 something RS 250s.  So maybe I was being somewhat presumptuous going out with them on a 1970 air cooled, pushrod, 350 single.  But Mosport is a big wide track and I don't think I got in anyone's way.
My bike ran strong on the top end, but in the rough corners it would misfire and not carburate cleanly.  It wasn't a huge problem as, when I'd straighten up, it would run clean.
The VRRAs format is to run shorter heats on Sat., and longer finals on Sun., except for a couple of classes that have no heat, only finals.  My first race was one of these classes, the Masters light weight. Scott Mackenzie took off and disappeared, followed by Doug Forbes and Antonio Reis.  I was was chasing my old sparing partner, the evergreen Stan Nicholson on his TD2 Yamaha.
I got ahead of Stan  regularly braking into turn #5, but he'd come back by me on the back straight.  I got by Stan once braking for the last turn, #10, but he motored on by on the start/ finish straight.  We were closing on Forbes and the four of us finished in tight order: Rios (in 2nd), Forbes, Stan, and me in 5th.
While the mid corner and exit misfire wasn't a big problem, it was annoying and certainly didn't help. I figured that it must have to do with the remote float dancing around, so I wired a piece of foam rubber between the float and the carb to stabilize it.  But then, I noticed that the bolt was missing from the positive battery lead and the lead was just resting against the post.
I don't know if replacing the battery lead bolt or stabilizing the float cured it, but cured it was and the motor carburated cleanly for the Period 1 350 race, which ran with the P1 open class and the Pre-65 500s and I won my class and finished 4th overall behind three P1 Open bikes.  And, my fastest lap was a little faster than in the Masters race.
This gave me some hope that I might have something for Stan and Rich Midgely in my 'bump-up' race, the Period 2 Light Weight.  But, on the contrary, they both pulled steadily away and I finished a fairly distant  3rd in class.  My fastest lap was a good deal slower than in either of my previous two races, which surprised me as the bike didn't seem any slower and wasn't showing any less revs anywhere.  Which leave the conclusion that I was slower.  Why?  At least I had the consolation of watching the Stan & Midge scrap, with Stan just pipping Midge.

A shower, dinner with Nancy & Len Fitch, and a beer with Doug Macrea, Brad Monk, and Herb Becker eased my troubled mind and I had no trouble sleeping Sat. night.

Sun. Morning , the wind had changed direction and become more of a tail wind for the long back straight so, after practice, I decided to gear the bike up by taking a tooth off the back.  When I took the rear wheel off, a mangled washer fell out of it and I saw that the snap ring retaining the brake shoe on the pivot post had broken allowing the washer between it and the shoe to fall off and foul the hub.  My
pit neighbor, Ron Kalaquin, came up with a suitable washer and snap ring and that crisis was resolved. Then, Erik Green noticed that the nut that holds the gearbox sprocket on had backed off.  I replaced the locking tab washer and tightened the hell out of it.
On the first lap of the P1 350 race, someone went down on oil in Moss' corner, Turn #5 and I saw the red flag in Turn #1 starting the 2nd lap.  This caused a lengthy delay as the rider was attended to and the oil, which went at least to Turn #6, was cleaned up, so the restart was shortened to 5 laps.  I again won my class, but my fastest lap was about 2.5 seconds slower than I had done the day before.  Alright, the cement dust on the oil in the racing line in Turns #5/6 probably caused everyone to go slower, but 2.5 seconds is a lot.
This left the P2 final, and Midge really nailed the start and this time prevailed over Stan.  I didn't get a sniff at either one of them and finished a distant 3rd, in a race that was shortened to 6 laps because of the previous delays.  My fastest lap was a little better than in the P1 350 final, but still 1.5 secs. slower than I had gone Sat.  Was I losing confidence in the tires, which had lots of miles on them?  Was I thinking about leaving for the Isle of Man in two days?  That bothers me some, as one should do one's fastest lap on the last lap of the weekend, but, on the whole, it had been a great, and largely trouble free event.  In fact, it was probably the first trouble free weekend I'd had all year.  Beautiful weather on a superb race track with good competition; what more could one ask for?
While the VRRA, like other vintage racing organizations is catering to more and more modern 'vintage' bike, Mosport still had a wonderful representation of pre-war racers. 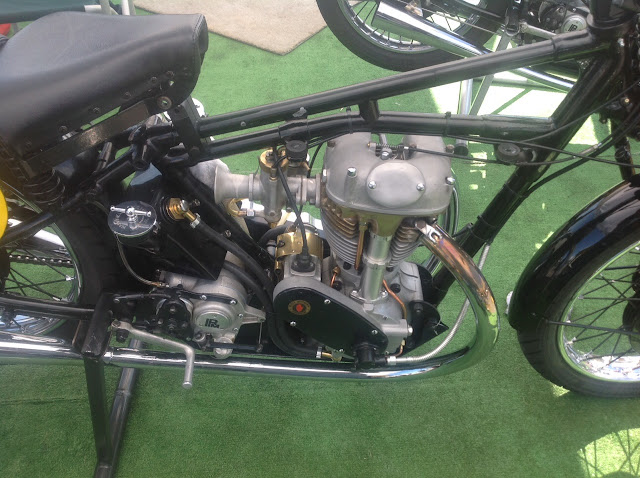 There was a great variety of bikes on show: