Last Sunday, Team Obsolete participated in a "Vintage " track day at Thompson Speedway in the extreme northeast of Connecticut.  The track has a long history starting in the 1940's, based around a 5/8th mile oval.  The 1.7 mile road course uses at least half of the oval. I had last raced at Thompson in 1978 and shortly after that there was a fatality when a stock car lost control and hit the gap in the oval where the road course pealed off.  After that, the road course (which was in rough shape with orange cones in the potholes down the back straight) was abandoned.  A few years ago, the road course was revived, totally repaved, and lengthened and altered slightly.  There hasn't been any racing on the revived course, perhaps because of a lack of runoff, but several track days.  This one was in conjunction with a swap meet and bike show, sponsored by Indian.


Team Obsolete brought three bikes: an Arter Matchless, a works BSA 750 triple, and a works 350 Benelli four.  This Arter Matchless G-50 is know as 'Wagon Wheels' as it is perhaps the first bike to be raced with cast magnesium wheels.  It's the bike with which Peter Williams finished 2nd three times in the Senior TT at the Isle of Man, to Ago's MV in '70 & '71 and Jack Finlay's 500 Suzuki in '73.  In '73, Williams did a lap of 102.7 mph which, I believe, was the fastest lap by a single cylinder bike until 1989 when Robert Dunlop won the Ultra Lightweight TT on a RS 125 Honda and probably the fastest lap by a four stroke single until Bob Heath won the Senior Classic Manx GP in 1991 at a race average of 102.62mph.  In 1989, I did the fastest lap of the Senior Classic MGP at 102.52mph, but the course was much quicker then than in '73 with places like Quarry Bends straightened, widened, and smoothed.  Tires were better and I'm sure that I had more power  in the Team Obsolete G-50 than Peter had in his relatively standard motor.  I'm in awe of his '73 lap.  Team Obsolete has been invited back to the IOM for the fourth consecutive year to participate in the Jurby Festival and Lap of Honour and Wagon Wheels is the bike we'll be taking this year.

The BSA A75R is the bike that Dick Mann road raced in 1971.  This Is a bike that I've raced many times over the years and over the years we modified it to keep it a competitive vintage racer.  But, it was last raced in 2002 (with a different motor) and it was decided to return it to as close as we could make it to the way it was when Dick raced it in '71.  This was completed recently and Thompson was a good opportunity to see if it was right.

Likewise, the 350 Benelli four was rebuilt recently and needed to be tested.  This is a works Grand Prix racer from 1968 of the type raced by Renzo Pasolini and Kel Carruthers.  It's motor is DOHC, four valve, and seven speed. I had raced this bike several times, including the IOM where I crashed it on the first lap of the '93 Junior Classic Manx GP while leading and took a ride in the helicopter.  It was last run in 1997 at Schubenacadie, Nova Scotia, where we had an engine failure.

I went out on the track first on Wagon Wheels.  It's a bit awkward as the clip-onscreen very close together and inboard of the fairing.  Williams idea was to get the bike as narrow and aerodynamic as possible.  But, once I got rolling it wasn't a problem.  I did have some trouble shifting initially as the shift lever is a bit too long for me, but I managed once I got used to it.  When Alan Cathcart did a racer test on it at Mallory Park, he described the front brake (a Lockheed caliper with a 10" iron rotor) as "so wooden, it gives trees a bad name".  But, at the pace I was going, it seemed fine.  And, that pace was slow as someone crashed on our first lap on track at what seemed like a very low speed.  I guess just cold tires as the track seemed fine as we gradually upped the pace and I scrubbed in the new tires.
I took the BSA out next and, like the Matchless, I had some initial trouble shifting as it's lever was too long, also.  After a few laps, we were gelling nicely as I was reacquainted with an old friend.  It's a big, heavy bike with a heavy crankshaft/primary drive and therefore lots of gyroscopic effect which require some muscle to overcome, but it steers very well and has great brakes.
Finally, I went out on the Benelli, another totally different animal.  It shifted the best of the three and, with it's seven speeds and a relatively light crank, that's a good thing.  It was smoking a bit with rings that hadn't seated and I was shutting off early on the straight in deference to drum brakes and tires from 1997 which we hadn't had time to change, but it still seemed fast and I was getting into top gear.
Almost all of the other bikes participating in the track day were much newer that ours, but it wasn't a problem as there were few bikes overall and it didn't seem to be a problem going out in either group.  With plenty of track time, everyone seemed to pack up before the official end.
However, there was a good turnout for the bike show and there were lots of spectators for it and the swap meet and it has the potential to turn into a real event.

From Willow Springs, I rode up to Sacramento with Karl and Monday got working on the bike.  Mike determined that the swing arm pivot failure that we experienced at Willow was from a D shaped retainer, which the spindle socketed into, had broken free, allowing the spindle to back out of the retaining bolt on the other side. 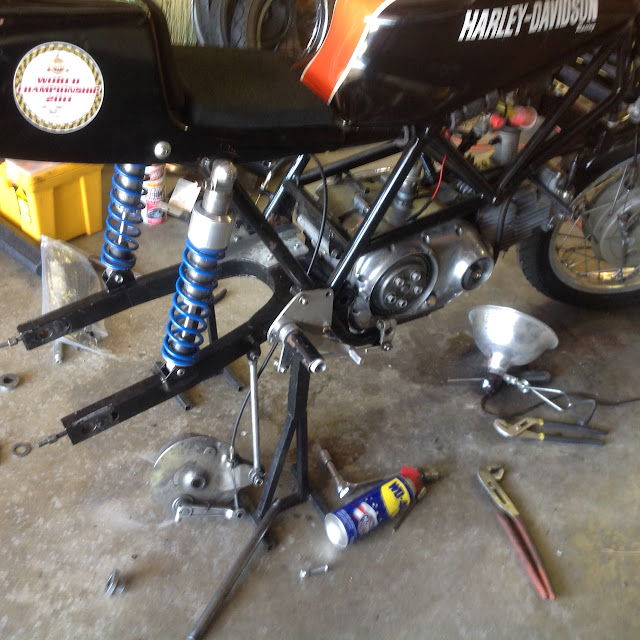 Mike started to work on repairing the fairing.
I discovered a broken spoke in the rear wheel.  Mike had another wheel with a broken spoke and I harvested two spokes from a third wheel to repair the two.


Tuesday, we took the bike over to Karl's and he came up with a plan to fix it.  This involved Mike and me finding some 2" diameter steel bar stock.  This took us to a neat old welding supply store in Auburn in a building that dated back to 1865.  We dropped the bar stock off with Karl, then drove to Davis to pick up some supplies from Mike's storage facility.  Back at Mike's house, I started cobbling a bench to put the bike on, because at my age I don't want to work on my knees.  After dinner, we drove over to Karl's and put both bikes in his pickup and took them back to Mike's.  In the morning, we finished the bike (except for the final paint on the fairing), organized the tools and spares, loaded everything up and headed for Sonoma.  There we rented a garage and unloaded the pickup and waited for the track day to finish to move in.
Garage mates Don Lange arrived from Seattle and and his old musician buddy Kenny Cummings arrived from NYC via SFO.  Several years ago, Don had become intrigued with Kenny's hobby of racing vintage bikes and started coming to the races and filming.  After a year or so, Don bought a street bike, a Honda CBR300F.  After another year or so, Don bought a race bike, a CB 175 Honda.  The weekend before the AHRMA Sonoma race, Don took a race school and made his race debut at Pacific Raceway in Kent, Washington.  This allowed Don to race at Sonoma and he invited Kenny to share his bike, racing it in 250GP, while Don rode it in the CB160 class and 200GP.

Saturday, I did a 85 mile road ride with my good friend Parra and three other Roadoilers.
Last year,  I rode Parra's TR5T Triumph, but it played up with a leaking fuel line, so I road his Dick Mann Special TT500 Yamaha.
Dick made nearly 200 frame kits for the XT/TT500 between '76 and '81.  Parra had initially cow trailed the bike but later converted it to road use.  It has Betor forks with Marzocchi yokes, Kosman front wheel with a Lockheed caliper and a Yamaha MX rear wheel and fuel tank, and Works Performance rear shocks.  Gus rode his '58 BSA Goldstar,  Robert rode his '83 Honda VF 750 Interceptor, Parra rode his FT500 Honda Ascot, and Jim rode his 2011 XT250 Yamaha, which may have been the smallest bike, but it was also the newest and Jim is an old roadracer and he led and set a great pace.
Parra, Robert and I left Parra's house in Forest Knolls and met Jim and Gus in Pt. Reyes Station.  From there we headed north through Marshall, then headed inland through Fallon, Valley Ford, Two Rocks, Dillon Beach and stopped in Tomales.
Robert headed back to the East Bay and Gus, Parra and I left Jim there and headed back to Forest Knolls with Gus peeling off at the end.  It was a gorgeous day and Marin was quite green after some recent rain.  The roads were fabulous and what an eclectic collection of bikes.
.
Posted by Dave Roper at 12:55 PM 1 comment:

Email ThisBlogThis!Share to TwitterShare to FacebookShare to Pinterest
Labels: Other Rides, Race Reports

Busy day at Willow Springs today.  I took Mike Bungay's 350 H-D Sprint out in the first Group 3 practice and eased into it as it had a fresh liner and rings, though it had spent some time on the dyno. It also had the front brake changed from an A1R Kawasaki to a 230mm Grimeca.  The Grimeca is much heavier, but is much more powerful than the A1R ever was. Exiting turn#3 on the 4th lap, while still getting up to speed, I rolled on the throttle and promptly spun the bike out.  I was dumbfounded as I didn't think that I was anywhere the limit.  It was a nice gentle low side and I wasn't hurt at all, and the bike wasn't that bad: broken windscreen, hole in the fairing, bent rear brake pedal, and lots of dirt around, but none in the carb. 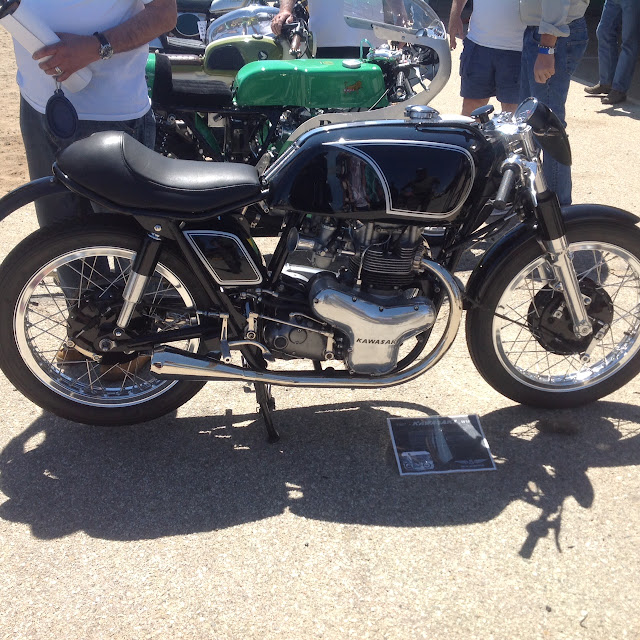