During the Covid-19 shut down of April, 2020, I've had a chance to catch up on some of the events that I never got to last year.

Near the end of July, 2019, I drove out to Road America in Elkhart Lake, Wi. for the AHRMA race there.  Since the previous race at Calabogie, I had taken the Dondolino motor apart and re-indexed the gearbox selector.  I was able to test both bikes at my secret test site before I left, and I had all four gears on the Dondo, but it wanted to pop out of 1st gear.  I figured that was worn dogs  and that I only needed 1st for the start and I could live with it.  While I had records of the gearing for my ERTT, I didn't for the Dondo, but guessed correctly and both bikes were geared close to perfectly.  In practice on the Dondo, I discovered that usually I had to 're-cock' the shifter on the up shifts.  That is, after pressing down on the shifter to select the next gear, I'd have to lift up on the lever lightly for it to engage for the next upshift.  Shifting in general is awkward on this bike, but it was running well and the brakes were good.  The ERTT seemed good immediately.  I was in race #11 on the Dondo and the final race #13 on the ERTT so, finishing practice at about 10:30a, I had to wait until about 4:30p to race.  Race #11 had three waves with F-250 in the first, 200GP in the second, and Class C foot shift and handshift in the third and was only 3 laps of this 4.048mile track.  Because lap times are so long, warmup and cool off laps eat up a lot of time, limiting the amount of time actually racing.  I found that holding the shift lever down kept the gearbox from jumping out of gear and I got a decent start.  Alex McLean on a rigid, cammy Norton and Dave Tompkins on a Vincent Comet pulled away.  I went back and forth with Dave Bourbeau on his tank shift H-D.  I had motor and brakes on him, but he could corner faster than me.  When pressed hard, the back end of the  Dondo dances around luridly. The friction shocks, flexy frame and 21” , WM1 (0?)wheels front AND rear limit the cornering ability, where as Dave’s H-D as a nice solid rear end and a big, fat tire.  And, he’s an excellent rider.  Dave prevailed and I finished 3rd foot shift and 20th overall out of the 32 starters.  The last race of the day was 350GP in front of 350 Sportsman  in the first wave and 250GP and Formula 125 in the second wave.  I got a reasonably good start, but a couple of the 350 Sportsman bikes came by immediately.  I dove under everyone into turn #1, but Eric Cook and Greg Potter came by on there 350 Honda’s and the three of us swapped back and forth.  Again, I seemed to have a little top end on them, probably because I had a fairing and they can’t in Sportsman, and I had brakes on them with my 4 LS 230mm Ceriani and probably less weight, but maybe they had acceleration on me.  Eric dropped out the 2nd lap and I pulled away from Greg.  Alex McLean got by Greg and we were both surprised to see the checkered flag at the end of the 3rd Lap the race having been shortened because of earlier delays, unbeknownst to us. I won by less than 3/4 of a sec., with the fastest lap of the race.
Sat. eve, I rode my ‘68 TC200 Suzuki about 6 miles over to Kiel for dinner with friends.
Sunday’s race on the Dondolino was much the same as Sat., except that the gearbox did jump out of 1st gear at the start, so I didn’t get as good a start.  Again I was 3rd Class C footshift and behind Dave  Bourbeau and 17th O.A., and about half a sec. slower overall time.
For the 350GP race on Sun., this time we all knew it was going to be a 3 lap race. I again dove under  the faster starters into turn #1 and  had less of a tussle with Eric Cook.  On the 3rd (i.e. last) lap, Alex tried to out brake me into turn #8, but got in too hot and off line and ran wide onto the rumble strips and I thought that that was the last I’d see of him.  But, he made an incredible recovery and timed the draft beautifully and just pipped me at the line by less than 2/3 of a sec.  My fastest lap was 0.019 sec. slower that Sat. and Alex’s was more that 2 1/4 seconds faster.  Good stuff.

I spent Sun. night with my friend in Kiel, then went to Chicago in the morning and spent several days with old friends in Chicago.  Wed., evening a bunch of the ChiVinMoto folks got together in a collective garage space to host out of towners Greg Glevicky and myself.
Fri. morning, I drove to Gingerman Raceway, near South Haven, Mi.  After the first practice on the Dondolino, I played with the external adjustment on the gearbox selector and got it so it wouldn't jump out of 1st gear and I didn't have to 're-cock' the shifter on the upshifts. 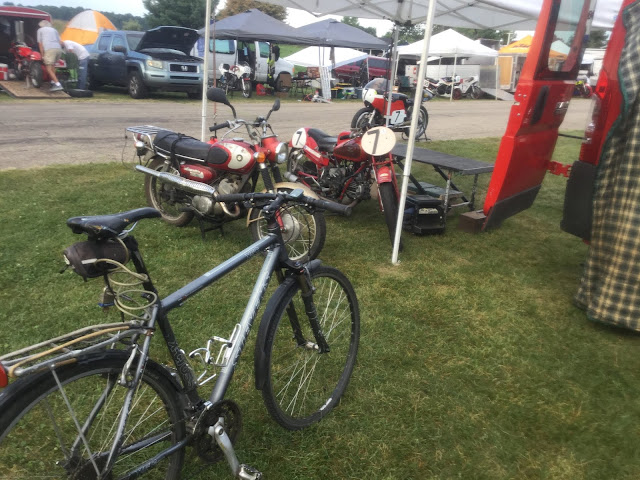 My wheels at Gingerman

The 350GP/350 Sportsman race was my first.  Alex McLean got an excellent start and began to pull away and I thought 'I'm not catching him today'.  But, after a couple of laps, he seemed to miss a shift and I closed.  He seemed to be getting ragged and I got by him and pulled away, winning by almost 5 3/4 seconds and having the fastest lap, despite the fact that my tach stopped working during the race.  Alex told me after that his tires were shot and he was sliding around.
In the Class C race, I again went back and forth with Dave Bourbeau passing him on the brakes and straights, he passing me in the corners.  I was ahead of him down the back straight on the last lap when I came upon a 250GP and a F-250 rider.  I thought that I had to get through the last corner ahead of them to keep Bourbeau at bay.  But, I ended up getting into the corner way too hot and off line and ran wide and three of them passed me back and I ended up 3rd in class and 19th overall.
Alex loaned me a tach for Sun. and, though it didn't seem accurate, I still thought it would be useful.  He mounted new tires on his bike and in the race he went a good deal faster than he had Sat., and I went somewhat slower and he beat me by almost 21 seconds, his fastest lap being about 2 1/14 secs faster than Sat., mine 1 1/4 slower that Sat.  This was the third time that I had beaten him on Sat. and he beat me on Sun.
In the Class C race I was also slower than Sat.  Kyle Corser, who had problems on his tank shift H-D Sat., and didn't finish, clearly had resolved those problems and was flying, dragging Dave Bourbeau along with him and out of my reach.  My fastest lap was about half a second slower than Sat.  I guess I peak early.
Posted by Dave Roper at 11:32 PM 1 comment: