13-15 Oct. 2012 was the Barber Vintage Festival, clearly the biggest vintage event in the country.  I entered Class 'C' foot shift with my 1946 Moto Guzzi Dondolino and 350GP, for which I brought my '70 ERTT H-D Sprint and Mike Bungay brought his 350 Aermacchi.  We had some problems with Mike's bike stopping in practice, but that turned out to be just a clogged fuel filter.  I geared Mike's bike taller and mine shorter and, in the end, I went a little faster on Mike's bike so that's the one I raced, with mine ready if back up was needed.  When I last ran my Dondolino at St. Eustache, the magneto failed.  So, I installed the magneto from my Airone road bike.  The Airone has a smaller mag gear and to use the Dondolino gear on the Airone mag, required making a plate to raise the mag 5mm.  The other problem was that the original Magneti Marrelli MLA mag has a manual advance while the Airone MRC-4E 15 degree magneto has a centrifugal advance.  I couldn't see any way to fix the mag at full advance to time it, so I assumed the '15 degree' cast on the body indicated that's how much the ignition advances.  When I initially checked the timing statically, it was 20 degrees so, I assumed it would be 35 degrees at fully advance.  I figured this was close enough to the 38-39 degrees I had been using, to test it.  I tried to check it with a timing light, but couldn't see any marks with my toy light.  However, the bike started easily and seemed to run well, as much as I could tell in the tight confines of my secret test site.  On the track in practice at Barber, the bike seemed to run great and the spark plug looked near perfect, so I didn't change anything on it.
This year, all practice was on Thurs. and Fri., with no practice on the race days on Sat. and Sun.  So, on Sat., I was first up on the Dondolino in the Class 'C' foot shift.  The competition was Ryan Ambrose on Big D's pre-unit 500 rigid Triumph twin 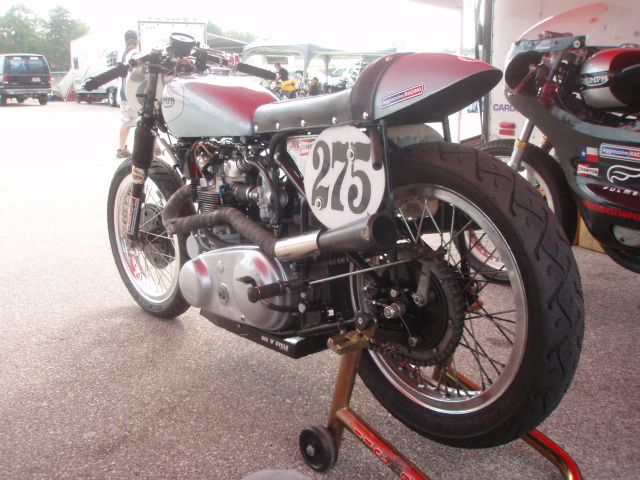 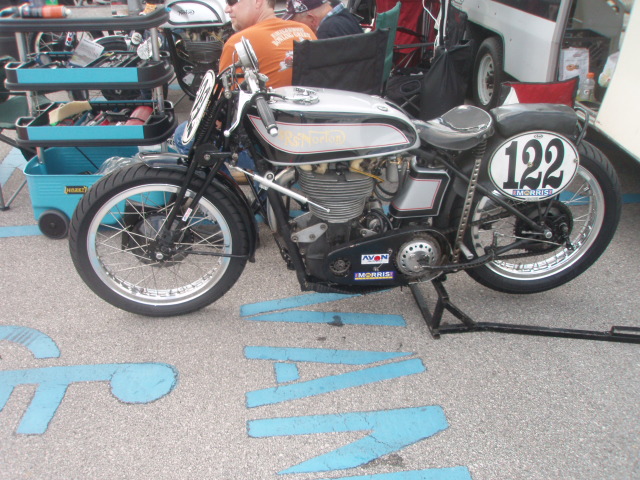 and Jake and Rob Hall sharing this BSA 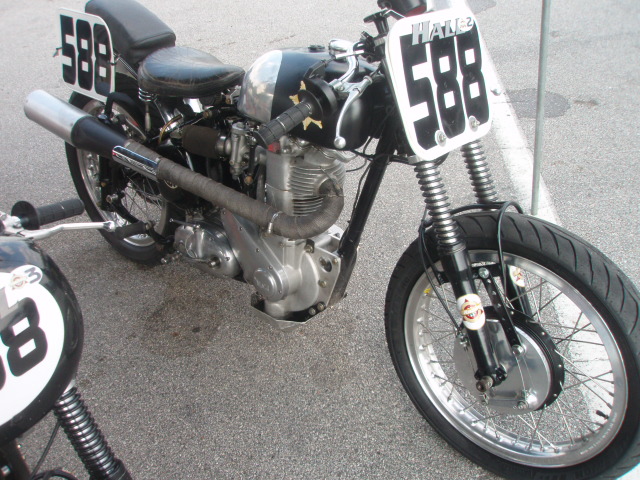 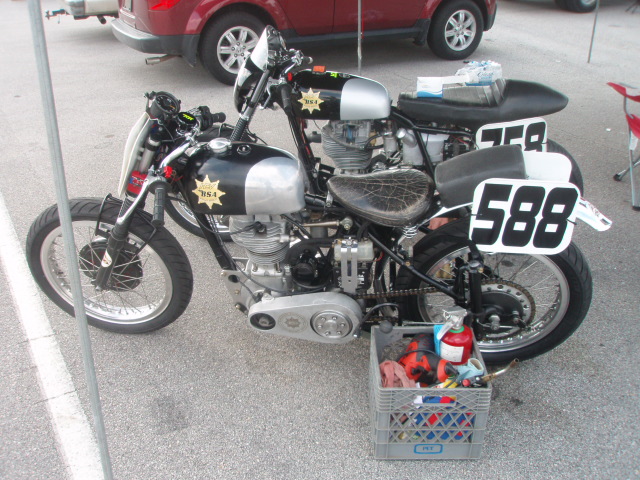 That BSA was idling next to me at pit out, but when we gridded up after the warmup lap, it wasn't there.  Turns out that there was a problem with the petcock and when he gave it throttle, it died.  Ryan was away like a shot, I stayed ahead of Alex briefly before he came by and I finished third of the 6 Class 'C' foot shift, ahead of the ten Class 'C' hand shift and ahead of half the of the 18 350 Sportsman bikes that started in the wave ahead of us.
There was a fair wait until the 750 Sportsman, 500 Sportsman, 350 GP race, but I occupied some of this with spectating in the Century Race, a race for bikes at least one hundred years old.  Dale Walksler won it (again) on his 1912 1000cc Indian in great style, chomping on his cigar with his open face helmet. Joe Gardella was a close 2nd on his 1912 H-D on which he had recently finished the Cannonball run.  Many of the Cannonball bikes were there and they got to do a parade lap, too.
I got it the lead of the 350GP class quickly and any threat to that lead ended when Paul Germain's exhaust pipe broke on his DT-1 Yamaha.  I set about seeing how many of the rest of the field I could get through.  I ended up 7th overall of the 39 entries after starting in the 3rd wave.  Only 4 of the 750s and none of the 500s had a faster fastest lap than me.

Sunday went much the same as Sat.  The Hall BSA did start the Class 'C' race, but didn't finish.  It looked like the race was going to be a barnburner between the BSA and the Big D Triumph.  Coming out of the last corner on the first lap, Hall was leading, but Ryan was pushing hard and, when Hall missed a shift, Ryan collided with him, knocking off his exhaust pipe.  So, Hall had to retire and once again I was gifted 3rd after McLean got by me.  My fasted lap was almost one and a half seconds faster than Sat., 10th overall, and Alex and I both finished closer to Ryan, so I was pleased.


Sunday's 750 Sportsman/500 Sportsman/350GP race went much the same as Saturday's except that Germain had the exhaust fixed on his Yamaha.  He finished 2nd in the class, but was almost 24 sec. behind.  I find this very interesting as at Miller I beat him by less the 3/4 of a sec.  I don't see a reason why Mike's bike should be faster of Paul's slower than then.  Is one bike or rider better suited to this track than that?   Or, does one rider happen to be 'on' or the other 'off' that particular day?  It's fascinating and the unpredictability of it keeps me coming back.  My fastest lap was only about 0.1 sec faster Sun. than Sat., but it seems most of the field was slower and only Jerrett Martin on the Big D Triumph 750 had a faster fastest lap and I finished 5th overall starting from the 3rd wave.
But, it could have been very different.  On the cool off lap as I went through the chicane on the back straight, I thought I missed a shift and tried it again.  And again. But, I had no drive and I look down to see that the chain had come off.  Inspection after I coasted and pushed in showed that the axle adjuster was broken, but which was the chicken and which the egg?  Luckily, it didn't jam in anything and lock the rear wheel and luckily it didn't happen a lap earlier.

Last Sunday was the USCRA's Pewter Run.  This is a road ride for pre-1950 (and some 'like design' post '50) motorcycles.  I had done this a few times in the past on my '53 Moto Guzzi Airone Sport, which is substantially the same as when this model was revised in 1949, but it's apart at the moment awaiting my attention at the end of the racing season.  But, Mark Gibson, founder of the Pewter Run, came to the rescue.  He arranged a ride for me on Tony Lockwood's 1936 Excelsior Manxman 500.

Tony is an ex-pat Brit who has lived in this country many years.  He brought four beautiful bikes to the Run this year.  He rode the oldest, a 1913 Motosocoche 2C7, which edged out Mark Turkington's 1914 BSA as the oldest bike in the event.
Tony let his friend ride his 1925 Norton 16H.
Tony's daughter Melanie Herman, rode his 1955 Norton Dominator 500, and won the long distance award, coming from Virginia for the event.  I sort of feel that I got the pick of a very fine litter.  Tony says the Manxman's 2nd owner bought it in 1938 and, while he was in north Africa during the war, dreamed of how he was going to modify it.  So, in the late forties, he replaced the girder forks with Matchless telescopic and made his own plunger rear suspension.
Tony had rebuilt the motor using a VW Beatle piston (1mm oversize) and had replaced the points in the magneto with an electronic trigger.
There were three length courses depending on how old the bike was and how far you wanted to ride.  I rode the longest, which was nearly 50 miles.  We started in light rain, but it stopped raining toward the end of the route.
The motor was superb: very flexible but quite quick when given some throttle.  The Albion gearbox worked well and had good ratios.  The riding position was very comfortable.  The suspension, while not plush, was undoubtedly better than original (though I'm curious to try an original now).  The brakes were O.K.
The route was great fun and very well arrowed, and I didn't look at the route sheet once.  The colors hadn't peaked yet, but were getting there.  I passed a cop going the other way early on and he waved to me.  Once I got familiar with the bike, I gave it some stick and rode it the way it was intended.  Therefore, I was the first to finish the long route, despite my number being 26, and was promptly DQed  for being too early.  No bother; it just gave me more time to smooze with the riders who had already finished the shorter routes.  One of these was Carlton Palmer who rode a terrific 1928 Norton CS-1 that had come out of Portugal years ago. 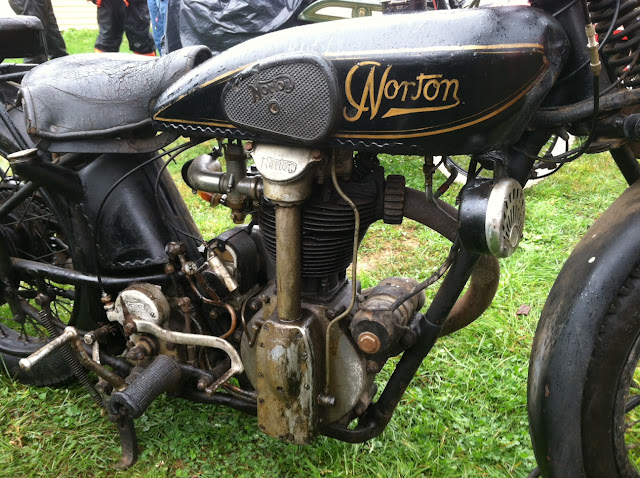 After everyone got back, we had some lunch in the Penacook Historical Society bldg., then prize giving.  Tony won his class and the oldest combined age of bike and rider.  Carlos won his class on his 1928 Indian 101 Scout.
This is a bike he found in Pawcatuck, Ct. that had been sitting in a basement for 40 old years.  It has some period mods and Carlos had to repair the fuel tank, but is largely as he found it and as it was last ridden in the '50s.
Rich Snyder won the '39-'49 class with his 1949 Matchless G-80S.

Pierce Reed was 2nd in this class and won the Good Sport award for best period attire.
Mark Gibson, who was riding the Pewter Run for the first time since Shane Rivet had taken over running the event from Mark, won the Hard Luck award, and the magneto failed on his Brough Superior, and he came back on the sweep truck.
Thanks to all who made this event happen.  It's a joy to see these old bikes used. 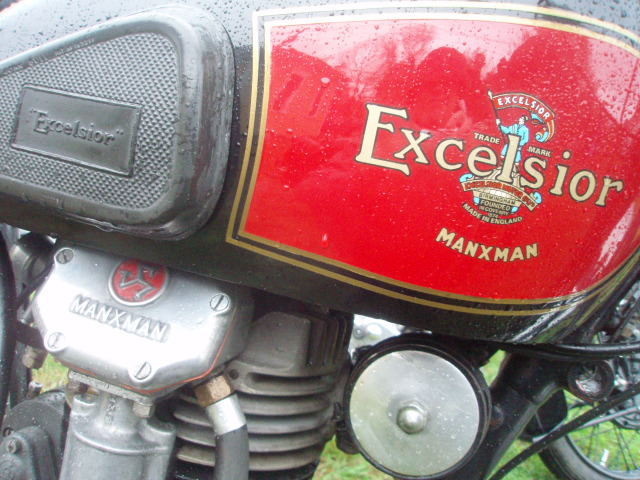 Before we arrived Fri. afternoon, that backup was called upon.  Henry Syphers realized just before he arrived that he had forgotten the key to the 175 Bridgestone he had bought from Doug and wondered if we could swing by his house in Manchester, Ct. and pick it up.  We were long past Manchester, but Doug suggested Henry could take the ignition switch out of the 200 and put it in his 175.
There were a number of interesting bikes lined up by the time we got there, including a few for sale, like this Ariel Leader. 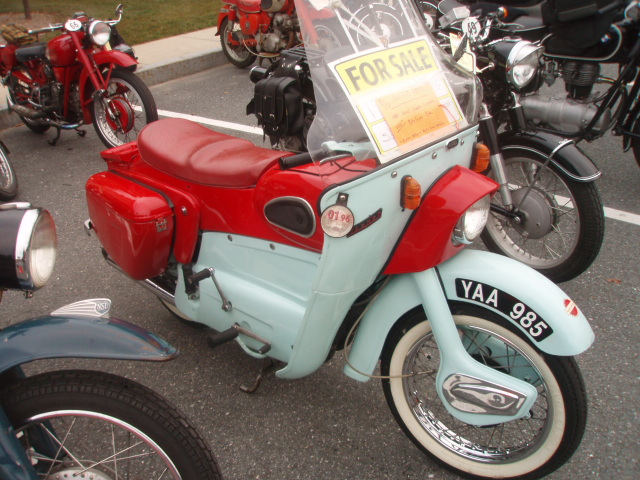 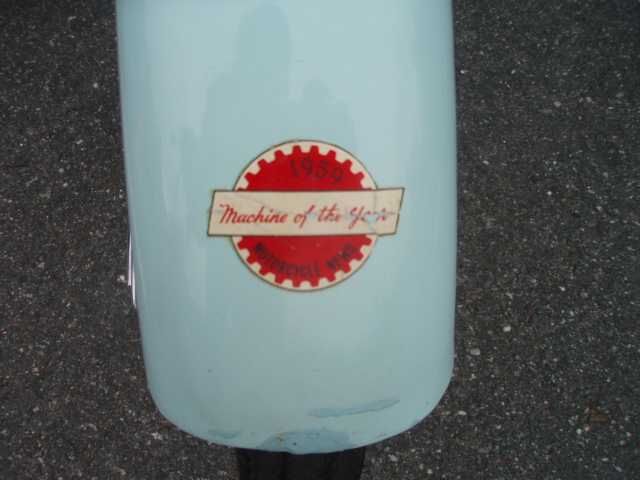 Sat. started cool and cloudy and, after we rode a ways, got very foggy.  Rich Hosley, on his Ossa Wildfire, came by in the fog and we rode together to the first checkpoint at Bunnell's Parts and Accessories, 488 Main St, Claremont, N.H., a non franchised motorcycle, snowmobile and ATV dealer.
Brian Bunnell was super supportive of the Giro, helping Giroist all weekend including meeting Rich Hosley on the road with a selection of clutch cables to replace the one that was just about to break.  Bunnell's also had some great vintage racing photos on the wall of Roger Chase on a pre-unit Triumph in a scrambles and at Laconia and on a Parilla.
The Autumnal equinox was approaching at 10:49am, which meant it was time to cut my hair.  I made a rough calculation on how many miles it would take to get to 10:49, then looked for an appropriate spot to stop at that mileage and started mowing.  I'd never done this in the field before, so had bought a battery powered mower.  I traditionally cut the scalp and beard to a 1/2" length, so I snapped on a rake that looked about 1/2" and started mowing, not realizing the mower had an adjuster for height that was on minimum not maximum.  The result was that my hair has not been this short since 15 April, 1970, when I got out of the Army.