When I had my right ankle replaced right after the last race of the 2014 season, I didn't know if I'd be fit to race in the first race or two of the 2015 season.  But, the surgery and rehab went really well and I had been riding on the street with no problem since Christmas time, so I decided to race at AHRMA Roebling Road, 21-22 Feb.  The only problem was that all of my race bikes were apart and in the middle of major motor work.
But, my friend Aleksey Kravchuk had just finished building a new race bike and he said that I could help him shake it down and race a bump up class.

We were prepared to camp, but decided it would be prudent to accept my friend Harriet's invitation to sleep on the floor of her house in the historic district of Savannah, as the forecast was for a low of 18 degrees.  Alex knew he had an oil leak, so Fri. morning we stopped at Action Rubber and Gasket on the way to the track and got an 'O'ring.  After setting up our pit and installing the 'O'ring we fired up the bike and found we still had an oil leak.  Further investigation revealed that it was a different 'O'ring that was at fault, so we drove back into Savannah and, after failing to find an 'O'ring at Graingers or a bearing house, ended up back a Action, who had the right part.  Back to the track and 'O'ring installed , this time the oil leak was cured.  We did some incidental drilling and safety wiring but decided it was too late and too cold to justify paying for Fri. practice.  We'd just be ready to go first thing Sat.
In the mean time, Gregg Bonelli offered me his Yamaha F-250 bike for a bump up class.
While Sat. morning wasn't as cold as Fri. morning, it was still in the 30's, and Aleksey's Honda didn't want to run.  It would fire if he choked it like crazy while I worked the throttle on the rollers, but it would die pretty much as soon as he took his hand away.  We thought there might be a problem with the float level or the kill switch and we spent time investigating those possibilities, missing the first round of practice.  While Alex was taking the carbs apart, I took Gregg's hot-rodded DS7 Yamaha 250 out for practice and it went alright, though the rear brake and right clip-on needed adjustment.
Then Alex realized the problem.  He had put race gas in the bike back in Brooklyn, but when we loaded the van, he grabbed the wrong fuel jug, one filled with methanol for another project.  Fri. we had run the bike on the race gas in the tank, but it was very low so, Sat. morning Alex filled it with methanol, unbeknownst to him.  With gasoline jets in the carbs, the methanol was way too lean for the motor to run.  He drained the fuel and put in race gas, and the bike started right up.  By this time, there was just my practice left and, as much as I wanted Alex to ride the bike first, I went out on it.  I took it quite gingerly as it was a total unknown, but it seemed like it was going to be good.  The wheels were out of balance, but it steered well, the close ratio Nova gearbox shifted great, and the Fontana brakes were right there.  Just finishing the 3rd lap. the bike lost power and I clutched it and pulled off with smoke pouring out of the right exhust pipe.  Removing the sparkplug revealed a hole in the top of the piston big enough to see the wrist pin and no sign of the exhaust valve when we rotated the motor over.  Alex was naturally devastated and I felt really bad for him and wondered if I had done something wrong.  Later disassembly found no oil going to the top end and the cam and rockers were completely cooked.  It hasn't yet been detrimined why, but at least I didn't feel guilty.
So, with that bike dead it was on to Gregg's Yamaha.  Gregg was to ride it in F-250 and me in F-500, immediately following.  Gregg got a good start but pulled into the pit lane at the end of the 2nd lap with a fuel leak.  We had a frantic scramble determining where the fuel was coming from (a fuel line had split), then trying to get at it and shorten or replace it.  This took long enough for me to miss the warm-up lap, but I was able to go directly to the grid.    I got a good start with a moderate little wheelie and pretty quickly slotted into 2nd in class behind Mark Morrow on his RD 400 based Yamaha.
At the end of the 2nd lap, he lost power and pulled off--apparently one of his carbs had fallen off, and now I was leading the class.  But, the right clip-on kept moving back towards the tank and I couldn't seem to push it forward down the straight.  I tried to carry on as long as I could, but it finally got too close to the tank and I pitted on the 3rd or 4th lap.  After much screaming and pointing I finally got Eric Cook to pull the clip-on well forward away from the tank and I took off again, a lap down.   The motor started loosing it's edge and the clip-on started moving back again.  I finished, but a lap down and the bike was pretty dead.  When I had asked Gregg to adjust the handle bar, he had loosened the pinch bolts on the yokes and rotated the fork tube, not realizing the clip-on wasn't tight on the fork tube.  It hadn't moved for him, but I guess I was pulling on it harder.  Only Harry Vanderlinder (SOS 2 MZ Skorpion), John Rickard (Vint. S/B LW Yamaha SR500) and presumable Mark Morrow (no times listed for him) had done a faster lap than me in the race, so the bike has real potential, but it was a moot point as the top end was now wasted.
Remarkably, after two bikes had died under me, someone offered me a ride for Sun.  Larry Morris, a near neighbor on Long Island, N.Y., had a Triumph Daytona 500 that he was riding in 500 Sportsman and he offered it to me to ride 750 Sportsman. 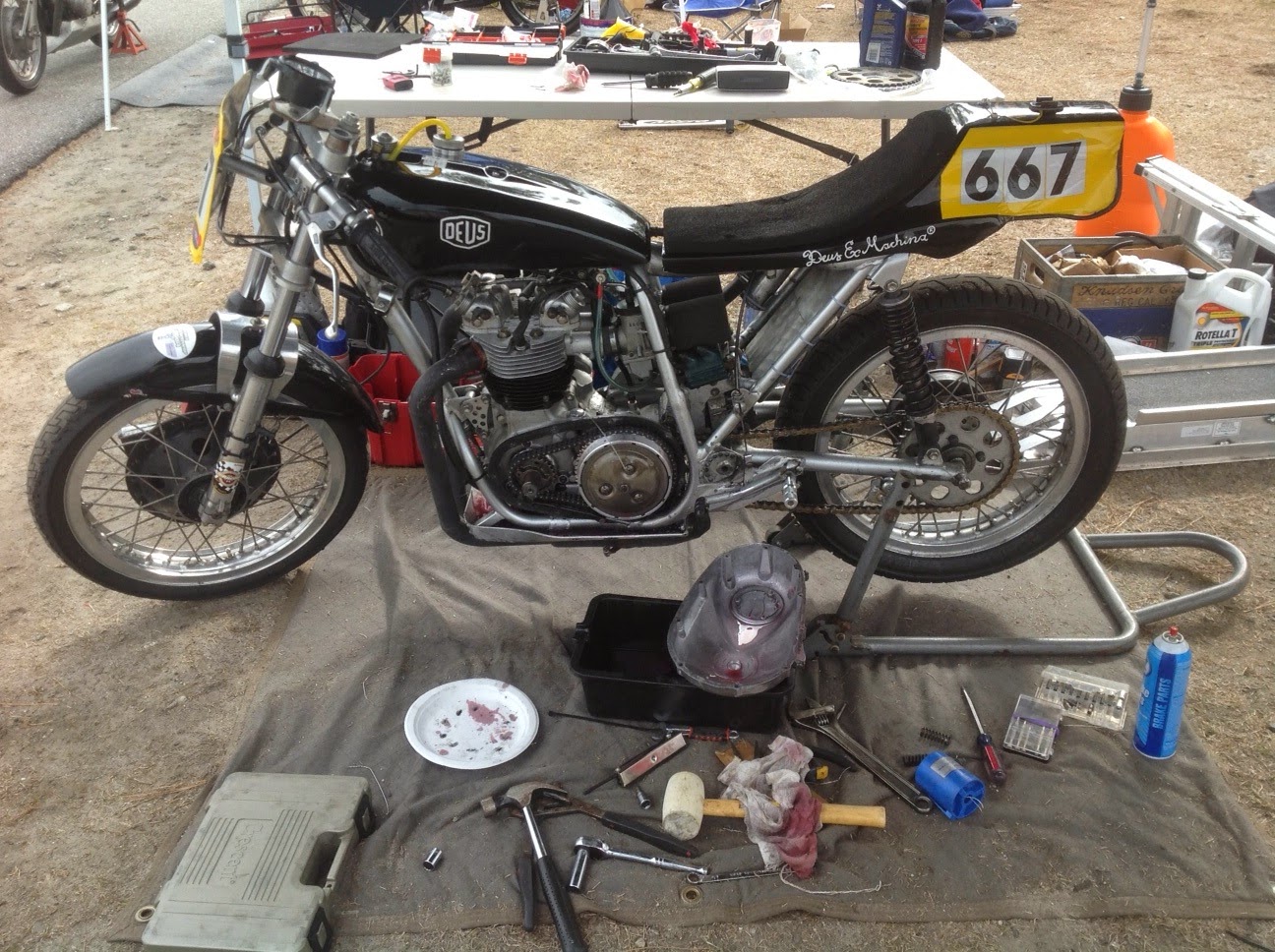 This was a bike built by Tim Joyce, in my opinion the fastest vintage rider in North America.  It's unique in that it has a big twin 5 speed gearbox welded onto the crankcases at 90 degrees to the normal orientation. 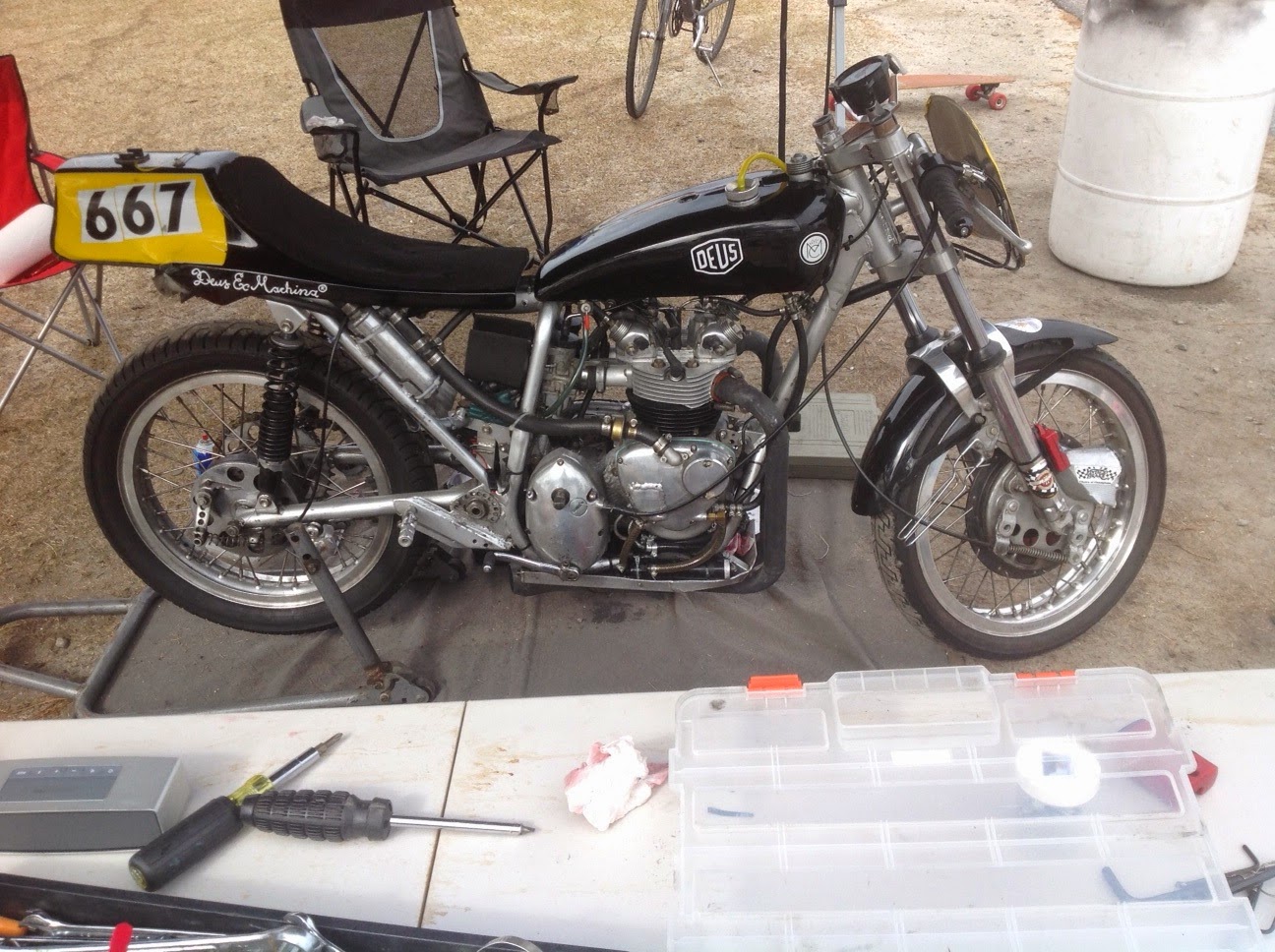 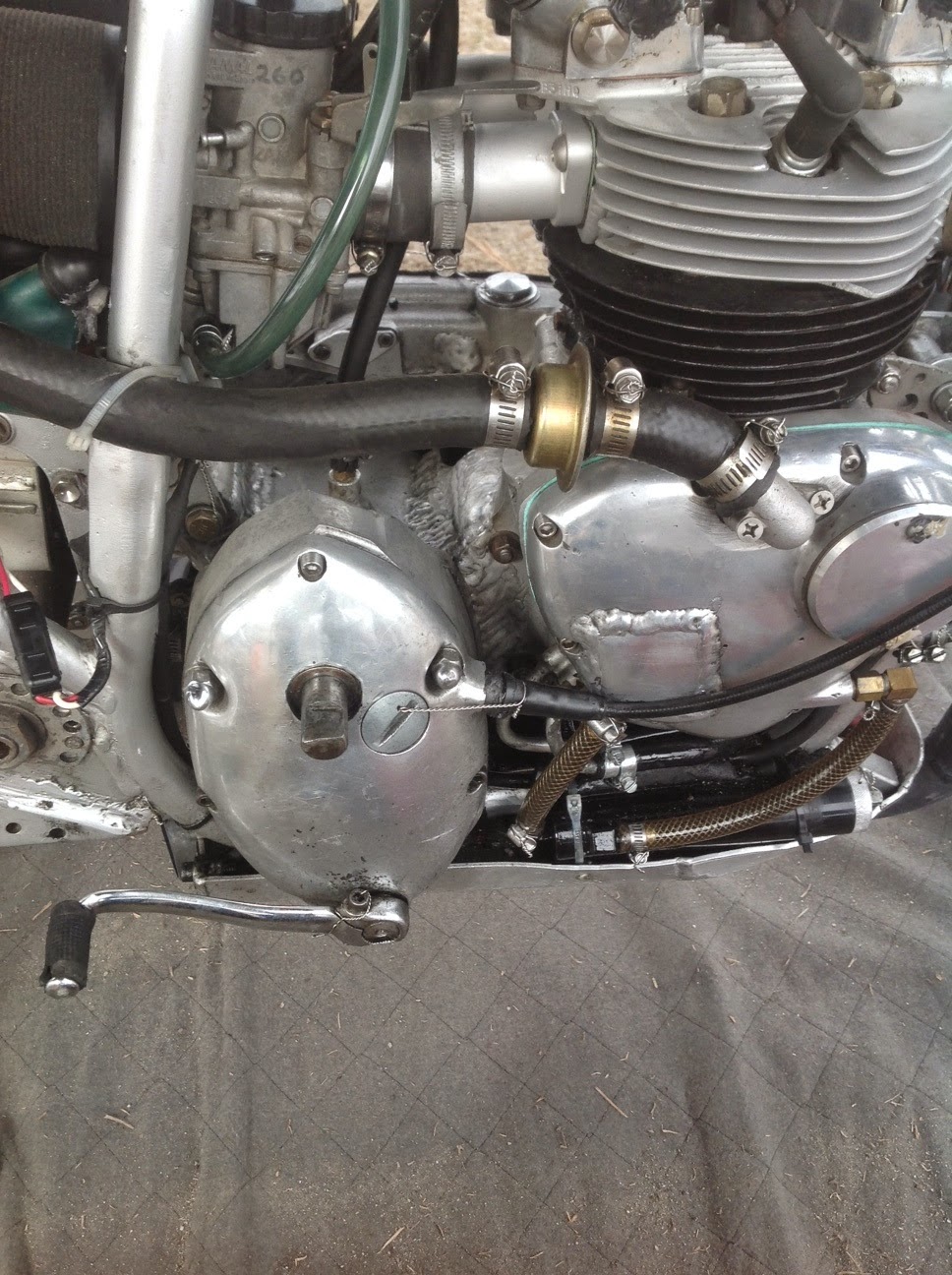 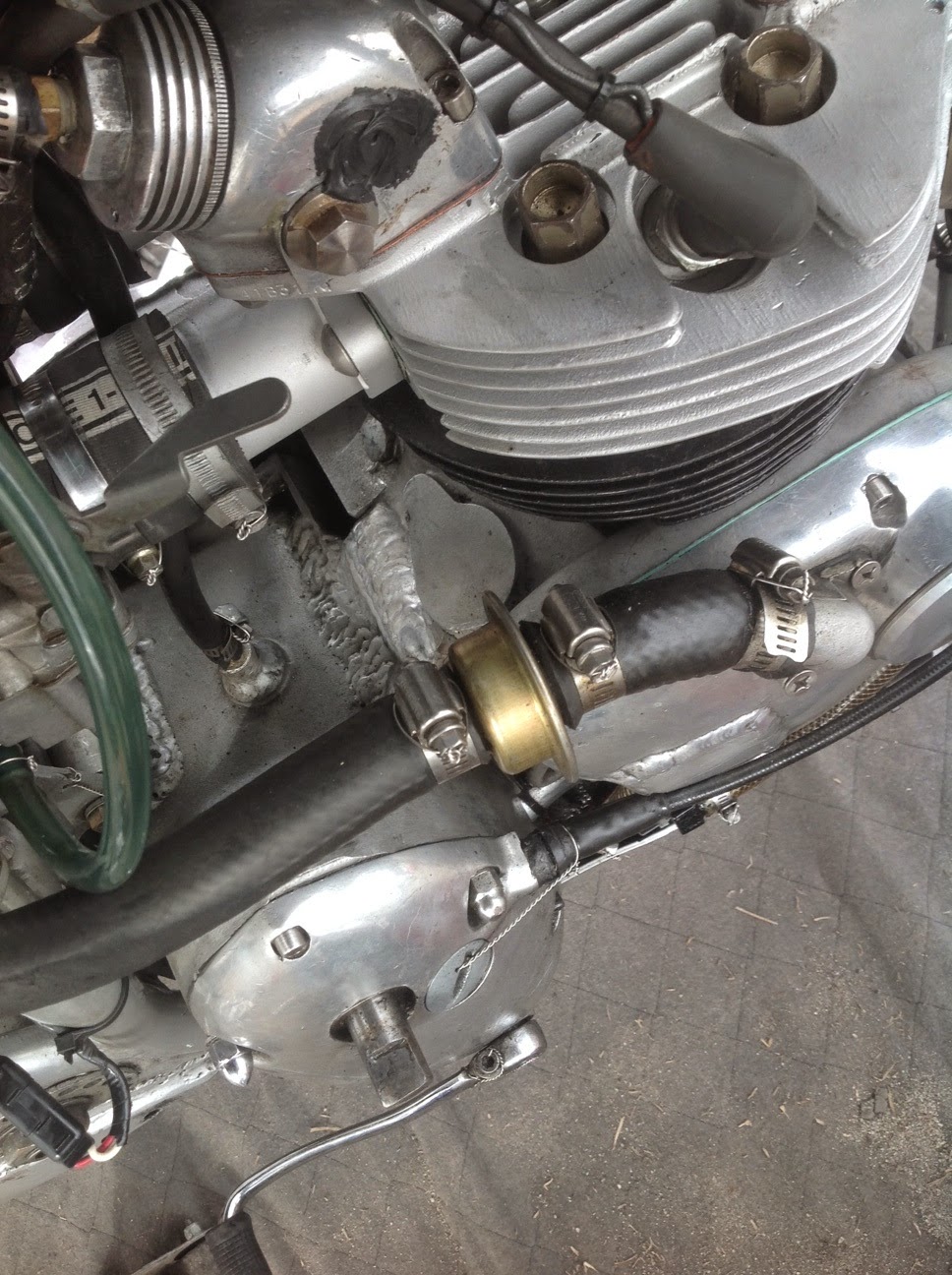 I was quite curious to ride it as I had seen Tim go extremely fast on it.  Larry had had some clutch slip on Sat. and thought the problem was just that the clutch springs weren't reefed down hard enough, and he said he would jump on that first thing Sun. morning.
When I went out in the first round of practice Sun., I found that the bike handled really well, had good brakes (the conical Bsump twin leading shoe with extended arms) and was remarkablly smooth for a Triumph twin.

And, the clutch was still slipping.  Also, when I came in, we found one of the clutch cover bolts was missing.  Larry said he had some more manly clutch springs he would put in and I went  looking for a replacement bolt.  It was a very long 1/4" Whitworth allen head cap screw and I couldn't find one anywhere.  So, we just put some spooge in the hole and I just got one lap in the 2nd round of practice.  It seemed like the clutch was no longer slipping, but the cover was leaking from the missing bolt.  Larry went out during lunch break to find some hardware, but Home Depot. Lowes, and Auto Zone didn't have anything like that.  But Alex, who was very much involved in wrenching on the bike, told Larry to get some 14"-20 threaded rod.  Alex threaded that into the case, put some flat washers over the counter bored holes and tightened up some lock nuts, then covered the whole mess in Yamabond.  I took the bike out for a scrub lap in one of the earlier races and it was good; the clutch didn't slip and the cover didn't leak. 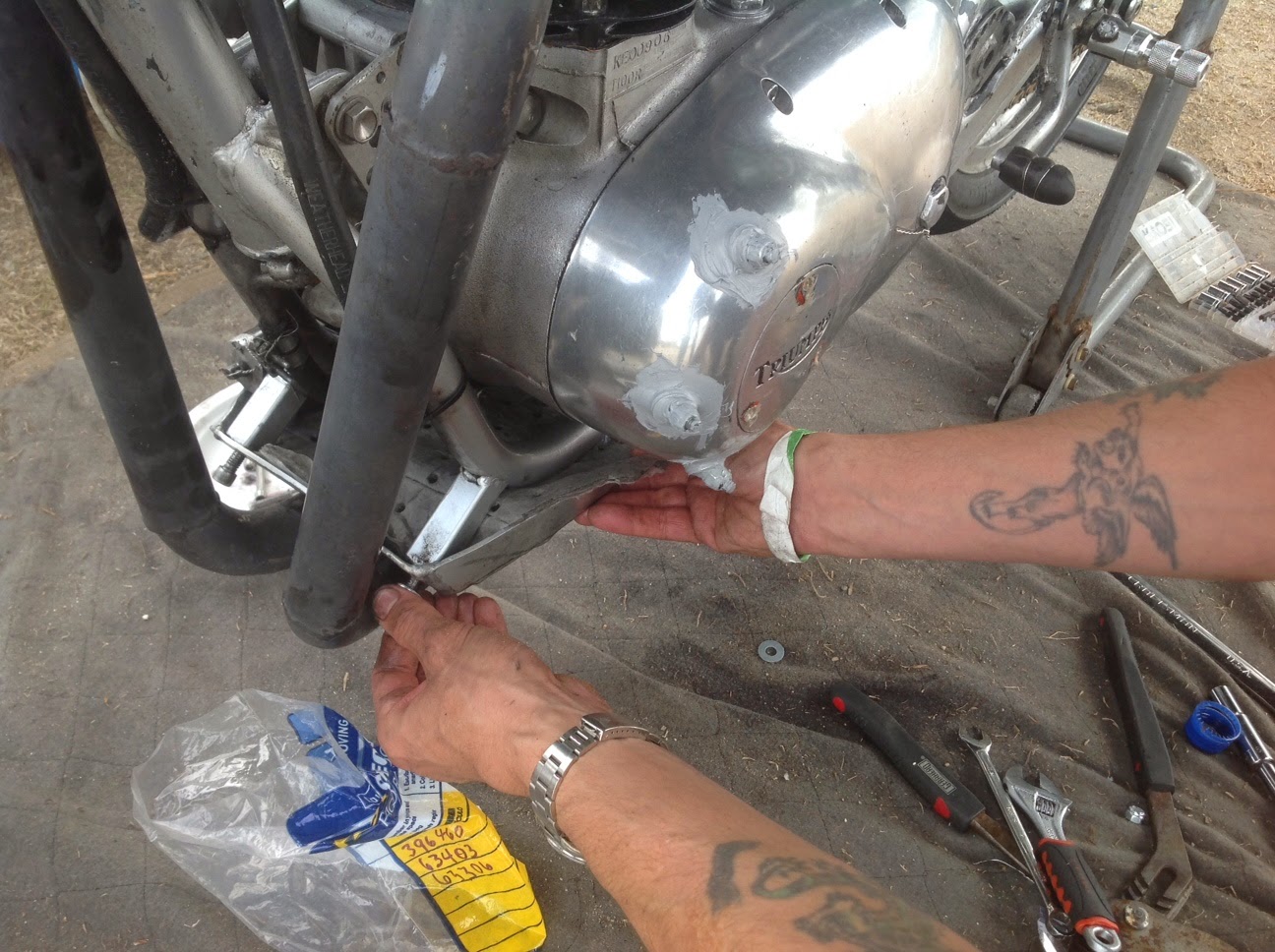 Larry decided that he wouldn't race the 500 Sportsman, which immediately preceded the 750 Sportsman race so as to not compromise my chances, despite my urging him to ride.  Race 7 was Sound of Thunder 3, Sportsman 750, Sound of Singles 3, eSuperSport (electric bikes), and F-750, with just four of us in 750 Sportsman: the 750 BMWs of Rich Heritage and Dan May, and the XS 750 Yamaha of Mark Nadelkov.  It was a single wave start and I got into 2nd in class soon.  I started to close on Rich Heritage and around the 5th lap got right on his tail out of the last corner onto the straight and got the perfect draft which I broke out of just before braking for turn #1 and slipped by.  I led that lap until we got back on the straight and Rich was able to motor by me.  This seemed to have pumped him up and he stepped it up.  I accidently knocked it up a gear and by the time I got it right, Rich and gapped me and that's the way we finished, Rich 4th overall behind two SV650's and a Ducati twin and me 5th OA ahead of Dave Rhinehart on a Triumph Thruxton, despite him having a faster best lap.
My new ankle worked great, the weather got good and warm, and I had a fun ride on a very nice bike.  A good start to the season.  Many thanks to Aleksey, Gregg and Larry.
Posted by Dave Roper at 10:37 PM 2 comments: