Recently, I took a quick road trip with a friend down to visit my friends Will and Elaine Paley just outside of Asheville, N.C.  Since I had last seen Will in October, he had picked up a new bike: a 1950 Douglas Mk IV.
As far as I know, all the bikes Douglas made were opposed twins.  Before WWII, most Douglas's had the cylinders fore/aft.  In 1934, they made their first transverse opposed twin; after the war, they were all transverse, like a BMW.  But, unlike a BMW, they used chain, rather than shaft, final drive.  And, the bike has unusual suspension with torsion bar springing for the rear swing arm and short leading link front suspension.  Will's bike seems quite straight and original, if not concours.  The Mk IV was followed by the Mk.V, then the Dragonfly, a similarly configured 350 opposed twin, but with more conventional suspension of telescopic forks and coil sprung rear shocks.
I helped him change the ancient front tire (3.25 X 19")for a good NOS IRC.  It's quite impressive how many parts the Brits can pack into an assembly.  Changing the tire required removing the front mudguard and one of the two stays.  When Will withdrew the axle, loose parts showered down on the floor.  We found that there was no rim band over the spoke nipples, so we substituted duct tape.  After we got the tire mounted, wheel balanced, and brake de-glazed, we slapped it back together, then discovered another spacer washer stuck to the magnetic parts tray.  But, did it come from the Douglas and, if so, where?  Fortunately, Will had a manual and parts book and, after one false start, we figured out that it did indeed belong to the Dougie and where.
Will offer me a ride on the bike which I readily accepted despite the fact that it was just stopping raining and the bike wasn't registered.  I just took it to the end of his dead end road (known as a 'cove' in those parts) and back, but that was perhaps 2.5 miles each way of very curvy road.  Will had a little trouble starting the bike, which he put down to still learning how to recognize what the engined wanted as far as spark retard, tickling, choke, and throttle.  And, perhaps the jetting wasn't spot on as there was a bit of hesitation at part throttle under load, but otherwise it seemed reasonably lively for a 350 of substantial weight.  It shifted and steered very well and I was quite impressed with the single leading shoe brakes.  Of course, it wasn't a long enough ride to form a definitive opinion, but the initial impression was good.  And, in any case, it's worth having and riding just for the 'odd ball' factor.

Again, I went up to my brother's in Haddam, Ct. and again, we had mild weather.  We had the traditional and excellent Thanksgiving day meal with neighbors.  Friday, we went for a end of season ride, Amy, on her '71 CL350 Honda, Doug on his '64 Norton Electra, and me on my '53 Moto Guzzi Airone Sport. 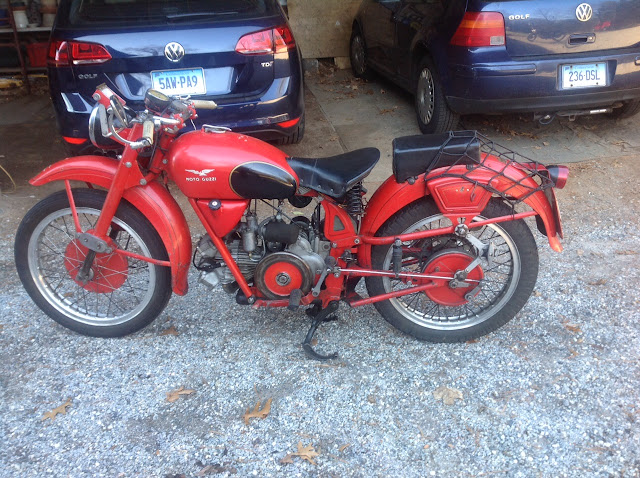 We rode to N. Madison where we met Rich Hosley, who was riding his '73 750 Norton Commando Interstate (one of the last 750s) after having a technical issue with his Norton International.  We headed north and west with Doug leading first through Durham and Northford.  Then Rich took the lead as he was more familiar with the roads to the west.  He took us through Wallingford, past Quinnipiac University, and into Cheshire where we had an excellent lunch at the Notch Store.  From there Rich led us through Prospect, Bethany, Seymour, Woodbridge, Hamden, North Haven, Northford, North Branford, East Haven, Branford, and Branford Center, where we left Rich at his business after looking at his pile.  This includes a '42 Ford Convertible (one of the last before production stopped for the war), an Ossa Wildfire and a 175 Sport; a Norton ES2, 650 SS, Combat Commando Roadster, a Fastback, and a Manx; a Royal Enfield Interceptor; a Matchless G-12, etc., etc.  From there, Doug led us through North Branford, Guilford, North Madison, Killingworth, and back to Haddam.  All told, it was about 150 miles through south central Ct., in excellent conditions with the leaves off the trees allowing one to see around the corners and into the woods and clean roads.  And, though it got more populated as we went west, traffic wasn't bad.  Doug drained the oil out of the Electra and the Honda hot.
The next day was cooler and showery and I went riding mountain bicycles with another neighbor, Cheryl,  and her dog, in Cockaponset State Forest. 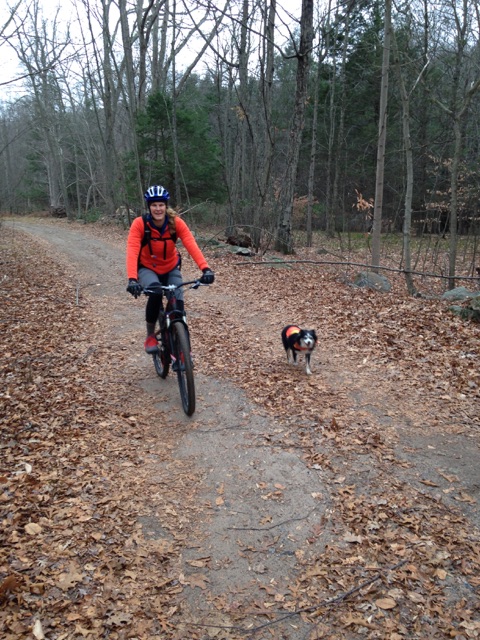 I hadn't been out in the woods on a bicycle for a couple of years, well before I had my right ankle replaced.  I only crashed once, so I obviously wasn't trying and Cheryl had to do a lot of waiting for me to catch up.  She is nearly 20 years younger than me and has a pretty trick bicycle and is very fit and experienced.  But, it felt great to be out in woods. 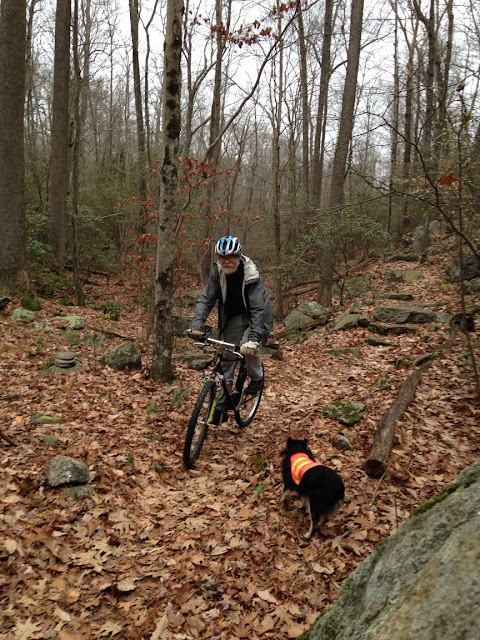 As long as I'm on two wheels, I'm happy.
Sunday, we went to the British Iron Association breakfast at Pete and Sandy Swider's house in Salem.  My old sparing partner, Phil Turkington, was one of the dozen or so who showed up.  Phil and I had many dustups in 250GP races, he on his Bultaco, me on my CRTT.  A few years ago, he badly broke his femur and quit racing, but still rides vintage bikes on the street.  It was good catching up with him.  And it was good hearing Ad Coppens' classic immigrant story.  He arrive in the U.S. from Holland with $28 in his pocket, knowing no one and little English.  He worked three jobs, built up some capital, and started a tire business, importing and exporting tires to Europe.  Eventually, he sold out and started doing what he really loves, restoring AJS and Matchless and supplying part for them from his shop in Salem.
Back in Haddam, Doug took out his '64 260 Benelli and I fired up the Airone and went for a 10 mile burn up, then dumped the fuel and oil to put them away for the winter.
After draining all the fuel and oil, we lowered all the bikes into the basement.
This completed the ancient Roper Family tradition of stowing of the bikes and the end of another good season of riding.
Posted by Dave Roper at 10:53 PM No comments: