My friend Stu Carter just sent me a link to a video of the 2008 Moto Giro America which took place in Central California, starting and ending in Monterey and based three days in Paso Robles.  Seeing the video brought back lots of good memories, as it was a fabulous event.  There was a great bunch of riders on some superb bikes and excellent roads, route sheets, accommodations and food.  The USCRA Moto Giro crew did the timing and scoring.  I initially roomed with Frank Scurria, a legendary racer from the '60s.  He had a very serious accident on the second day and was airlifted out, but has since recovered completlely.  Unfortunately, the event was a money loser and so never happened again.
http://vimeo.com/66865312
Posted by Dave Roper at 11:53 AM 2 comments:

The latest motorcycle book I've read is 'On Motorcycles, the Best of Backmarker' by Mark Gardiner.  Mark has been writing his 'Backmarker' column for many years.  At one time it was in Motorcyclist Magazine, then in Road Racer X until that folded, and currently online at  http://www.motorcycle-usa.com and at his personal blog  http://backmarker-bikewriter.blogspot.com/.  This book is a collection of what he considers his best columns.  There are 76 'columns' which average less than 6 pages each.  This means that it's a book that one can pick up, read a bit, and put it down without having to worry about losing continuity.  However, I found that I pretty much plowed straight through it because I found it that compelling.
I've know Mark for a while and have had great respect for him after reading his book 'Riding Man'.  This is the story of him quitting his job and selling virtually everything he owned to move to the Isle of Man, learn the circuit and race there.  I didn't know, until I read it in 'Best of Backmarker' that he was suffering from debilitating rheumatoid  at the time.
While he covers a lot of racing topics, the book is not primarily about racing.  Mark is a real investigative journalist.  When he's  intrigued  by a topic, he does the footwork to get to the bottom of it.  Perhaps the best example of this is the lead column in the book: 'Searching for Spadino'.  Spadino was the nickname of the motorcyclist who rode his bike repeatedly into  the Mont Blanc tunnel while it was blocked and burning from a tanker truck accident, saving many people, then succumbing to the fire.  Mark wondered what kind of person would do this.  So, he went to Italy and France and interviewed as many people as he could who knew Spadino.  The result is a terrifically moving portrait.
Or the Hollister 'riot' that was the inspiration for the film 'The Wild Ones'.  Mark went to Hollister more than once to interview people who were there and remembered.  A picture emerges that is nothing like the movie.
Mark organized an expedition with Patrick Bodden and Bob Hansen to go to Paris and check out a bike claimed to be the CR750 Honda that Dick Mann won the '70 Daytona 200.  Bodden is a Honda race bike expert and Hansen hired Mann and ran the team.
While Gardiner's main interest is probably road racing, his columns run the gamut including the 5-5-5 tour (cross country ride on bikes costing less than $500, less than 500cc and pre-1975), the Cannonball run (cross country ride on pre 1916 bikes), Bonneville speed week, and Black Bike Week in Daytona, and the Catalina GP.
There are profiles of several characters including Rob North (frame builder), Udo Gietl (tuner and team manager), Anthony Gobert (road racer), Big Sid Biberman (Vincent expert), and Mike Goodwin (serving a life sentence for murdering Mickey Thompson and his wife, but did he?)
And, much, much more.  Fascinating stuff and highly readable.  Available at : http://thebestofbackmarker.blogspot.com/
Posted by Dave Roper at 11:58 PM 1 comment:

Email ThisBlogThis!Share to TwitterShare to FacebookShare to Pinterest
Labels: Book and Film Reviews

The Horex lives!  Today I started it for the first time.  And, remarkably, in less than a year from when  I first got it.  With the first kick I gave it, the headlight fell out, which amused my brother and sister-in-law no end. 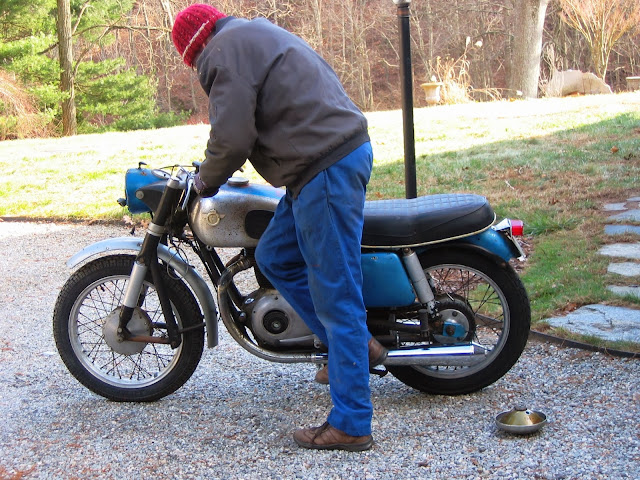 It took a few kicks and a couple of pushes and at first it didn't want to run down low. 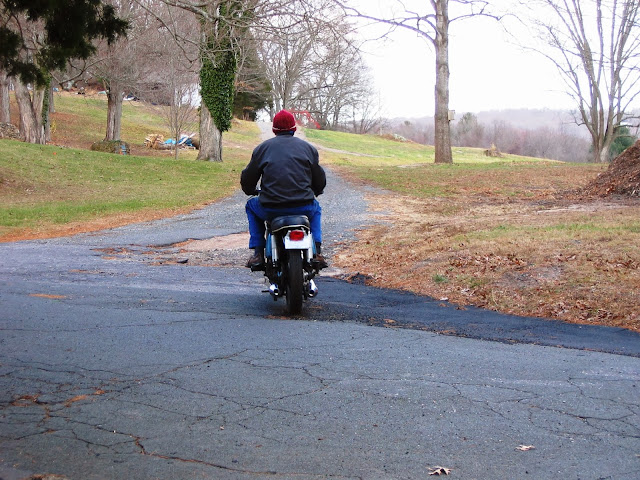 But, after I noticed that the carb was loose and tightened the nuts securing it to the head, it actually idled.  No bad noises, almost no smoke and no big oil leaks. 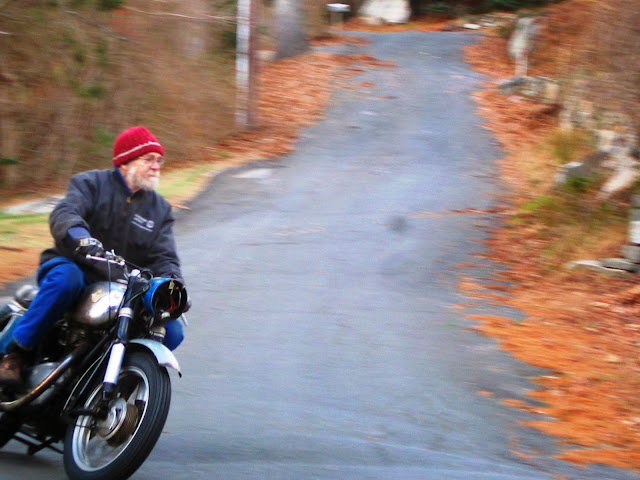 I ran the bike up and down their road, up to third gear and it seemed to pull well.  The brakes, however, weren't too impressive.
This is very encouraging, but there is still plenty to do to get it road worthy.  The fuel tank needs to be cleaned of all the rust inside.  The mufflers need to be mounted better.  The fork stops have to be increased.  A side stand has to be welded on, as the center stand is a two person affair.  And, the wiring has to be straightened out to get the lights and horn working. 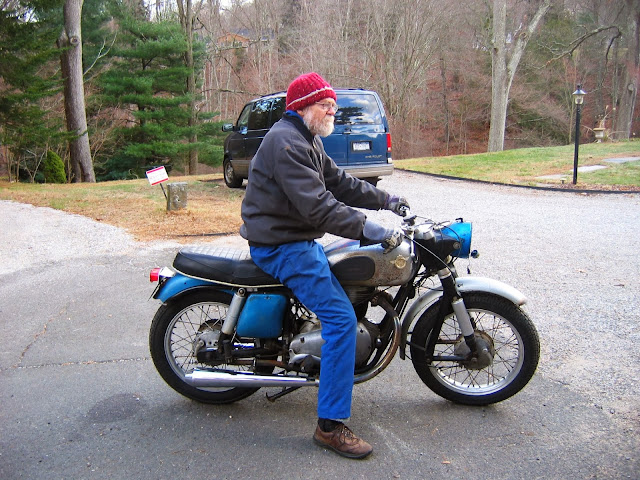 Sat. we continued our ancient family Thanksgiving tradition of putting the bike in the basement.  For the four strokes, this involved taking them for a ride to warm them up to drain the oil.  Unlike last year when I took long rides in balmy conditions, this year it was around freezing, so the rides were short.  Amy had ridden he R65 BMW Fri., and that was already lowered in the basement.   I took out her CL350, which has been converted to low pipe and disc front brake.  That disc brake seemed to be dragging and the clutch slipped initially, but after I got it warmed up, the brake freed off and the clutch stopped slipping.  It's a great running bike and quite agile, but the brakes aren't too impressive. 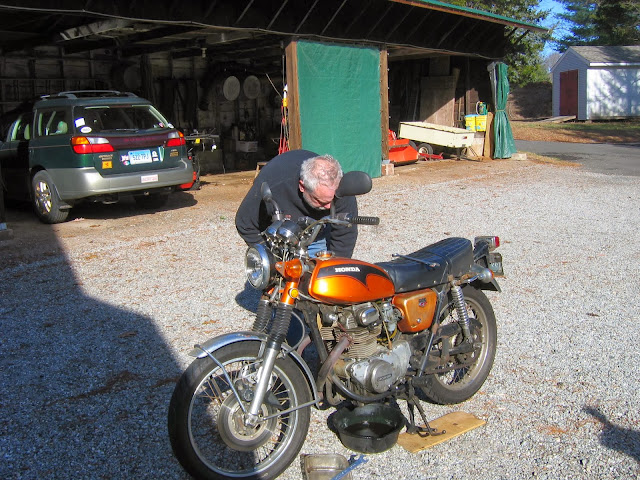 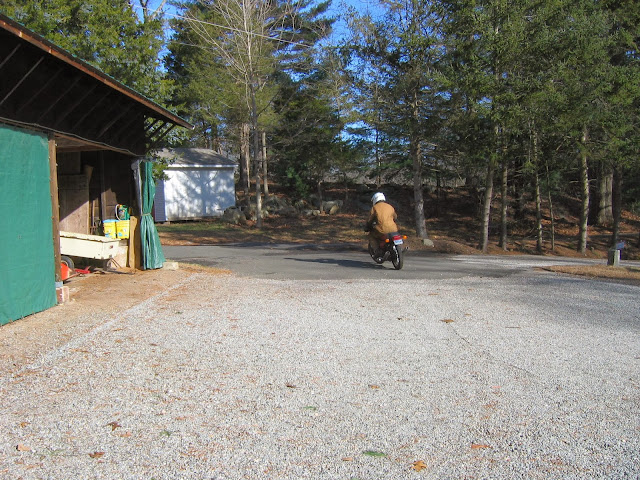 Being a 90 degree V-twin, it's really smooth and he's put a comfy seat on it.  He's also put handle bars that are wider than my taste.  I missed the 2nd to 3rd shift several times; you have to be quite deliberate.  I was thinking the front brake wasn't too impressive, then realize it has linked brakes and front brake lever only works one side and you have to use the pedal to get the second front brake.  And, the switch gear is terrible.  But, fast, long legged, stable, comfortable and with a great sound. 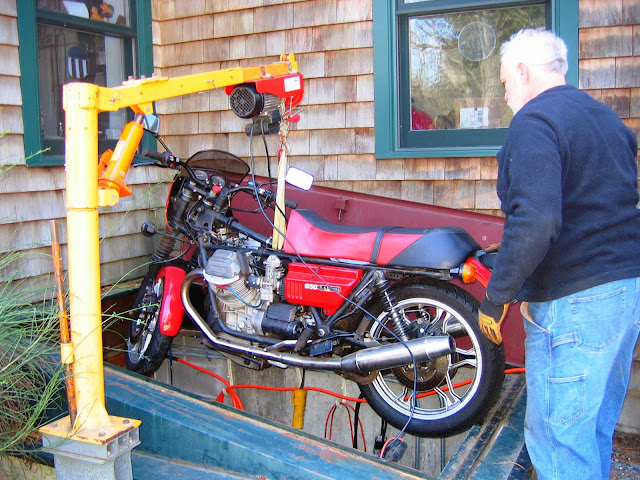 Finally, my Moto Guzzi, from 24 years earlier, the 250 Airone Sport.  It's also comfy and has a great sound, but slow and mediocre brakes.  It doesn't  have a terrible turn signal switch because it doesn't have turn signals.  Remarkably little oil came out of the tank and sump, because most of it was on the outside of the bike.  But, I still love it.
We saved Doug's '66 250 Benelli for Sun. which was forecast to be warmer.  In the morning, the internet told me it was 38 degrees, but don't believe everything you read on the internet.  I had intended to ride it to the British Iron Assoc. breakfast in Colchester, but a fuel tap leak cause me to go to plan B and ride in the cage with Doug and Amy.  Good thing as we were spinning up in the car and saw a couple of accidents on the way.  A couple of guys arrived late because Rt.66 was closed in Hebron because of the black ice.  But, by the time we got back it had warmed up enough that the ice was gone. We changed the fuel tap and I took it for a 10 mile loop.  The motor ran great and was much smoother than the last time I rode it as Doug had changed the crankshaft.  He got it with a 260 crank and it vibrated badly.  With the proper 250 crank it was quite pleasant and went well.  He's put a 2LS Bridgestone backing plate in the Benelli front hub and it now stops very well.  I found the shift lever quite awkward, the bars at a odd angle and the seat quite hard.  And the exhaust is pretty loud, but a great running and stopping bike.
Another motorcycling Thanksgiving.
Posted by Dave Roper at 12:01 AM 1 comment: