Several people have asked me about the video of me doing a lap around the Isle of Man Mountain Course on a G-50 Matchless that used to be available on this website and on Youtube, but is no longer. Someone must have felt there was a copyright problem and it disappeared one day.  The video, Classic Racer Experience, is available as a DVD from Duke Video:       http://www.dukevideousa.com/Classic-Racer-Experience-NTSC-DVD.aspx.

I just stumbled across a video of Ari Henning and me having a dice at Virginia Int'l Raceway (south circuit) 8 or 9 August, 2009, on Motorcyclist Magazine's website:
http://www.motorcyclistonline.com/motorcycle_videos/01/motorcyclist_s_ari_henning_and_racing_legend_dave_roper_battle_it_out_at_the_ahrma_races_at_virginia_international_speedway/3150/
Ari was riding Buff Harsh's CB350 Honda and I was riding my ERTT H-D Sprint.  Buff set up a camera looking forward from Ari's bike and one looking back from my bike.  Buff did a superb job of editing and included neat features like the split screen.  Buff's a pro.  If the truth be known, I think Ari was taking it easy on this old man, as he had a fair amount more power than me, though I did have brakes on him.  Anyway, we had good fun and the video is entertaining.
I've been asked about the red leathers I was wearing.  That was the time I got to the track, registered, teched, then realize I hadn't brought any of my riding gear: leathers, helmet, boots, gloves, back protector.  I was able to borrow all that stuff from various people.  The leathers came from Barbara Conners.  I had a choice of too big (from someone else) and too small from Barbara.  They were like a small town hotel: no ballroom.  Later in the day, I slapped down my 250 and tore up the leathers a bit.  They were her 'B' set, Dainese off the rack, and she wouldn't take any compensation for repair.  Luckily, I didn't touch the helmet I had borrowed from Mark Mitchell.  Denny Poneleit  left before I could return his gloves and boots.  I did return them months later at another race.

And, you can find a link to 2+ laps I did at the I.O.M. in practice for the Junior Classic Manx G.P. in Aug. 1983, by scrolling down in the Video section on this website.

Email ThisBlogThis!Share to TwitterShare to FacebookShare to Pinterest
Labels: Videos
Last weekend I went up to my brother's and did another session on the Horex and the roller coaster of emotions continues.  On the one hand, there are many beautiful and impressive aspects to it; on the other hand, every time I take something apart on it I find something broken or bodged.
The first thing I did was pull off the wheels to mount the new Heidenau tires I got from Ivan Messina's Motorrad Unlimited.  I got a 3.25 X 18 K34 for the front and a 3.50 X 18 K36 for the rear.  The wheels are impressively light, the front weighing only 13 lbs.  They have alloy rims, quite wide WM-3 front and rear.  I don't know if Horex made the rims themselves, but they're unlike any of the Italian, Spanish, British, or Japanese alloy rims I'm aware of, having a lower shoulder.  And, the axles are beefy at 18mm diameter.  When I took off the rear wheel, I realized it was missing the rear axle adjuster on the left side.  I've located one in Holland, but a 22 euro plus shipping, I may well fabricate one.  Then I struggled to separate the rear sprocket, cush drive, and hub.  It looks like it threw a chain once and pieces were distorted.  Then I found it was missing one of the brake shoe return springs and the tit on the one shoe that the spring hooks on was broken off.  This is on the fixed pivot end of the shoe, so it isn't nearly as important as the one at the cam end, but it's one more item on 'the list'. I shortened the front brake cable for the lower handlebar I had installed.  In the rear, the stop for the brake pedal was bent so it wasn't doing anything.  When I straightened this and got the pedal in a reasonable position, I found I had to relocate the brake light switch so it wasn't on all the time. 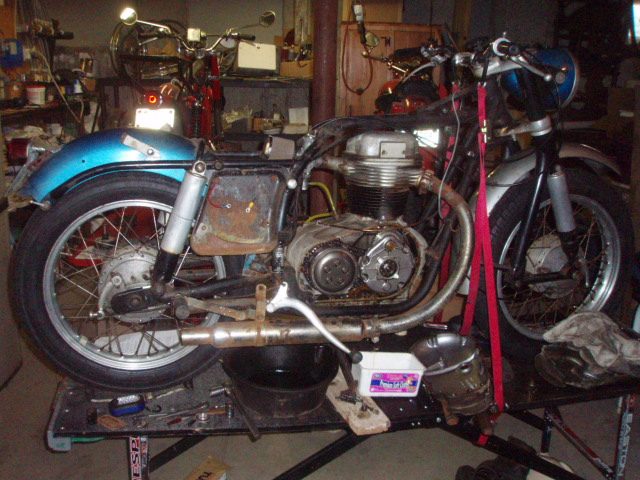 There are a number of beautiful aluminum castings on the bike and the one that fixes the rear backing plate to the tang on the swing arm is an example.  The shift and brake pedals another.  On most bikes of the era, they would be steel.  These lightweight aluminum castings seemed to allow them to overbuild other features,  like the axles, and end up with a bike of comparable weight.
Next, I removed left engine cover to remove the original charging system and ignition.  This involved removing the shift lever, kickstart lever and footrests.  The stud the footrest mount on was very bent and I had to pound it out, straighten it, and chase the threads.  The Powerdynamo alternator/ignition uses Czech VAPE components mounted on an aluminum plate made specifically for the Horex. 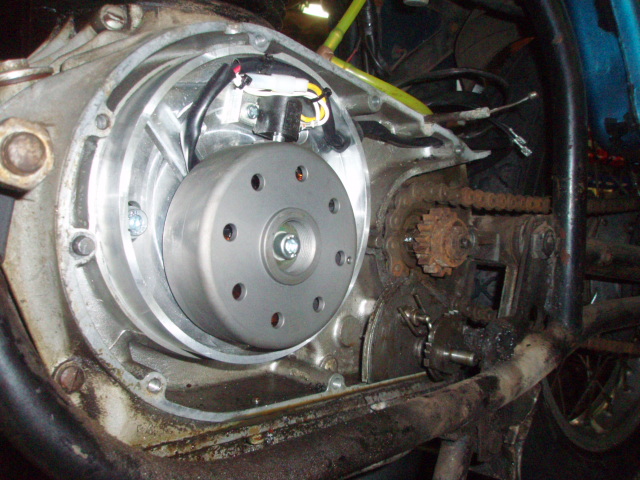 It's a 12 volt, 150 alternator with a pointless electronic ignition.  They have you remove the original Woodruff key and mount the rotor on the crank taper without a key.  So, you have to mount a degree wheel and zero it, then turn the crankshaft to the proper advance ignition point, 43 degree BTDC in this case. 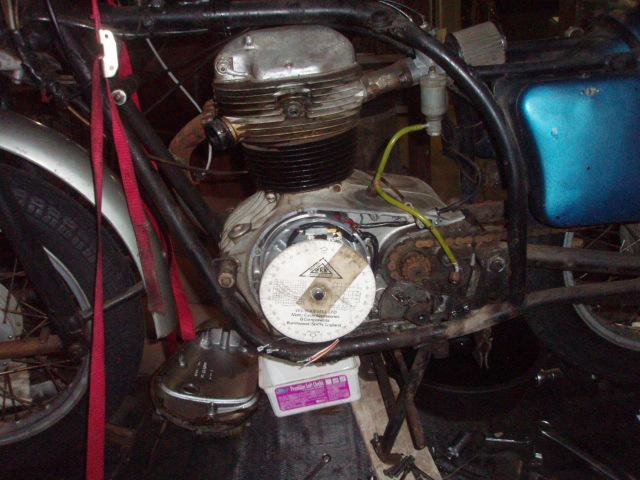 Then remove the degree wheel and put the rotor on in the correct relationship to the stator.  I found when I tightened the rotor bolt, the crank moved.  So I removed the timing side engine cover to find some way to hold the crank while I tightened the rotor bolt.  That's when I found the primary chain was incredibly loose.  There's a threaded adjuster that comes through the bottom of the right crankcase that bears against a nylon slipper to tension the chain.

When I screwed this in, it went way past the point where the lock nut could grab it and the chain was still slack.  There is either and intermediate piece that is missing (unlikely) or this threaded adjuster has be broken off and ground shorter (more likely).  Add another item to 'the list'.  I got the rotor mounted in the correct position, but have yet to mount the rectifier, voltage regulator, coil, and 'black box' in the tool box.
Brother Douglas had changed the muffler on his Benelli and offered me his old one for the Horex.  It looks pretty reasonable when I mocked it up and now I have to get a second one for the other side. 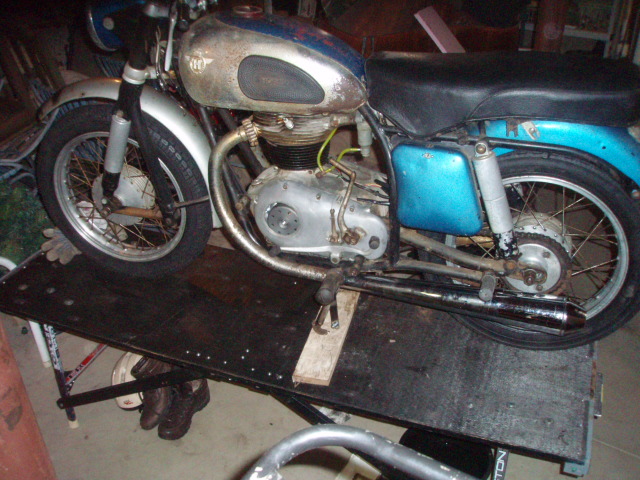 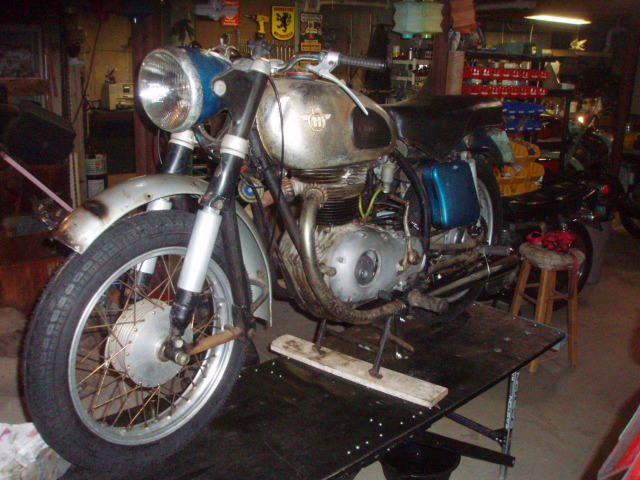 Also on 'the list' is mounting the Velo seat properly and trimming and mounting the front mudguard.  Ultimately, it's going to need a chain and sprockets too, but let's get it running first.
Posted by Dave Roper at 12:08 AM 7 comments: