The AHRMA  season traditionally begins with Roebling Road in Georgia and this year it was the 25-26 February weekend.  In total contrast to last year, the weather was very warm with temperatures on Fri. and Sat. in the 80's and Sun. pushing 70 and sunny.
In addition to my 350 H-D Sprint ERTT, I brought Team Obsolete's 'Surtees Special' AJS 7R to test in practice.  This bike has a chassis designed by John Surtees in 1959 and built by Ken Sprayson of Reynold Tube.  Surtees never got to race it as Count Augusta, Surtees' employer at the time, forbade it.  Surtees sold the bike to Rex Butcher who, for some reason, couldn't get on with it.  He let Mike Duff ride it on a practice day at Brands Hatch and Duff loved it.  Duff got Tom Arter, his sponsor at the time, to buy it and he raced it with success.  After Duff was hired by Yamaha, Peter Williams raced the bike.  They both speak very highly of the bike.  This became the inspiration for subsequent Arter Matchlesses.  After Arter died, his family put the bikes up for auction and Rob Iannucci bought several of them including the Surtees Special.  We recently restored the bike and this was the first opportunity to ride it. 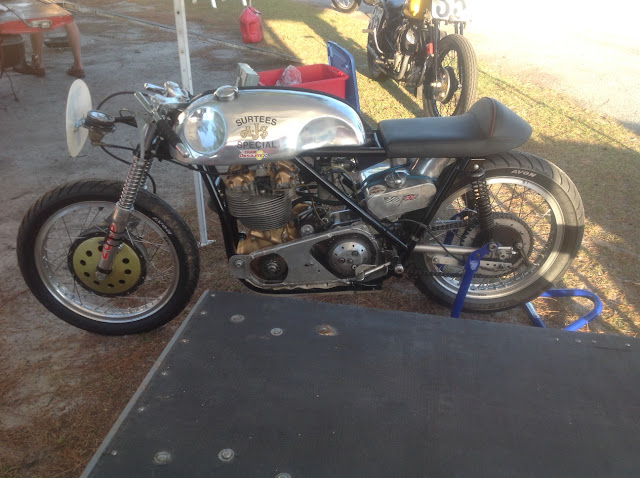