From Road America,I drove to Chicago and spent three and a half days with some dear friends that go back to college days.  Once again, Ken Kales of The Sports Car Store let me use his shop facilities to work on my bike.  I tried to methodically check everything to cure what ever was wrong at Rd. Am.  I took the points out and dressed them, replaced the wire from the points to the coil, replaced the condenser, repaired the battery ground wire.  I found the ignition timing well retarded, but that could have been from removing and replacing the points.  I checked the valve clearance, which hadn't changed, and did a leak down test, which was excellent.  I checked the coil for resistance and found no evidence of shorting.  I took the carb apart and found that the tip of the air screw needle was broken off and jammed in the jet.   Knocked the broken off piece out of the jet and got on the phone to find a replacement.  But, I didn't think that was the problem, as I hadn't touched the screw in years  and suspect it had been that way for a while.  I didn't feel like I had found the smoking gun, but couldn't think of anything else to do.  I started it up and it seemed to run OK, but couldn't run it through the gears, so I went to Grattan with my fingers crossed.

I don't know which change or changes that I did made the difference, but the motor ran well at Grattan.  Unfortunately, I had lots of trouble with missed shifts.  I had had a few missed shifts at Rd. Am., but I had other problems to worry about.  Now it seemed to be getting worse.  It was almost exclusively on the up shifts.  More often than not, it would undershift from 2nd to 3rd and over shift from third to 4th, so I'd try to be very firm and deliberate for the former and lightly tap the shift lever for the later.  But, it wasn't entirely consistent.  I had a lot of slop in my shift linkage and I spent a fair amount of time tightening that up by bushing the arm on the shift shaft and replacing the clevises and pins in the linkage, but it didn't seem to help.

Again, the 500 Premiere race was before the 350GP and we were gridded in front of 500GP, 500 Sportsman, Formula 500 and Vintage Superbike Lightweight.  I got a fair launch and then missed a shift and was swamped by the field.  Karsten Illg on his RD 400 based Yamaha won overall and F-500 with Tim Joyce winning 500 Premiere on Maurice Candy's Manx Norton.  Andrew Mauk and Wes Orloff, both on 450 Honda based Premiere bikes were having a good diced when Wes missed a downshift and ran off the track stalling the bike in a gravel trap and not finishing.  Kenny Cummings was next on his Seeley G-50, so I ended up 4th in class, though Alex Mclean came by on the 500 GP Mckeever Manx Norton, making me 7th overall.  My fastest lap was slightly faster than Kenny's, but my lap,times varied by some 3.5 seconds depending whether I got it in gear or not.
The 350GP race was gridded behind the 750 Sportsman and ahead of Formula 250 & 125.  Things went slightly better in this race, but I had token opposition in class as Paul Germain decided not to bump up from 250GP as his DT-1 Yamaha was running poorly, and I beat the other two starters, both on 250 Ducatis.  I finished behind two 750 Triumphs and three XS650/750 Yamahas and ahead of three Yamahas and a Triumph.
It rained hard over night and into the morning and I took it very gingerly in practice.  It stopped raining and the sun came out by the time racing started, but there was still water streaming across the track in several places.  Wes Orloff didn't start the race Sun., as his gearbox broke in practice.  Tim Joyce saved a big slide on the stream in turn #1 and pulled off after the first lap.  Kenny Cummings pulled off after the second lap.  Then it started to rain again and two 500 Sportsman bikes went down in the turn #10 'keyhole', with me having to take evasive action as one of the riders ran into my path.  The race was red flagged and on the restart, it was only Andrew Mauk and me in Premiere.  We were both trying to be really careful in the tricky conditions and I push Andrew hard, finishing a little over 0.1 of a second behind in third overall.  Andrew has been racing a long time in all disciplines and he said that when ever he raced on his birthday, he won a race.  He thought that streak was going it end this weekend racing against Tim Joyce on Maurice Candy's Manx, but he was wrong.  The streak continues.

The rain stopped again before the 350GP and the sun was out, but still lots of water streaming across the track.  The Robinson father and son on Triumphs sandwiched the Hargis father and son on Yamahas.  I got ahead of Pete Beyer and Mike Dixon, both on Yamahas, pretty early on, but they started to figure out conditions and both got back by me near the end of the race.  We swapped back and forth a bit and, in the end, I finished behind Pete in 6th overall, and 0.016 seconds ahead of Mike. After the race, I drained the oil out of my motor and a gear tooth came out with it.  I dropped the bike back off with Bill Himmelsbach on my way home and he took it apart and found two broken gears and the dogs badly worn on another.

After I had the trouble with my 350 Sprint at Summit Point, I dropped the bike back off with Bill Himmelsbach.  The intake valve had started to seize in the guide and the question was lubrication or clearance.  Bill found a partial obstruction in the oil feed through the rocker cover.  He also talked to Kibblewhite, the manufacturer of the valve and guide blank.  He ended up giving it more clearance than before and putting a different finish on it.  He then ran it on his DYNO, and everything seemed good.  I picked up the bike on my way to Road America in Elkhart Lake, Wi.

The motor didn't want to start for the first practice Sat.,and I convinced myself that it didn't have any spark.  But, after much checking and futzing around, I realized that I did indeed have spark and evidently had just failed to flood the carb enough.  Somebody give me a dope slap.
I did get out for the second practice, but the motor ran very poorly with lots of miss-fire.  I changed the main jet, needle position, point gap, fuel hose from float to carb, changed the break-in oil, and charged the battery.

Some or all of that helped considerably, and the motor ran much better for my first race, my 'bump up' race, 500 Premiere.  I totally blew the start with the bike in neutral when the flag dropped.  Once I finally got rolling, I was a bit tentative, having gotten no good practice.  But, by the end of the 6 laps, I was starting to get into it and closed on Helmi Neiderer, finishing 5th in class and 8th overall.
I dropped the main jet again, and in the 350GP the bike ran better yet.  We were gridded behind the 750 Sportsman class.  I got a decent start this time, though Jack Parker and Paul Germain both got better starts (as they usually do).  I got by Paul and several 750 Sportsman bikes going into turn #1.  I got by Jack before the end of the lap.  I caught Pete Beyer and Nick Hargis on their XS Yamaha 750 Sportsman bikes and we went back and forth some. Nick Hargis is the son of the race leader Jeff Hargis and was competing in his third race weekend.  After passing me back a couple of times, he decided to follow me for a while and he picked up some tips, then went by again and pulled away.  I was able to get right on Beyer into the last turn, but he was easily able to out drag me to the finish line.  So, I won my class and finished 5th overall behind four XS Yamaha 750 Sportsmen bike. The day had been a steady upward trend and finished on a high note.
It rained some overnight and was raining for practice Sun. morning.  My bike ran terribly in practice with a heavy misfire under any kind of a load, and I pulled in after two laps.  I suspected it must have to do with the rain, as I had done nothing to the bike since I won the 350GP race Sat.  I pulled the points cover off and water came out, so I thought that must be it.  I cleaned everything up and sealed the cover and tried riding around the paddock; no better.  I found a high resistance in the battery ground cable and bolted a cable directly from the battery to the motor with on/off switch; no better.  I put a smaller yet main jet in the carb; no better.  I took the float apart, changed the spark plug, and checked the valve clearance.

It stopped raining and the sun came out and I hoped that would make a difference.  I started the bike up for the 500 Premiere race and, as I was waddling down to pre grid blipping the throttle, the motor died.  I put it on starter rollers and it started, but died again.  And again.  And again. Then it wouldnt start and I did not start either race Sunday.  I was totally baffled, but some days are like that. 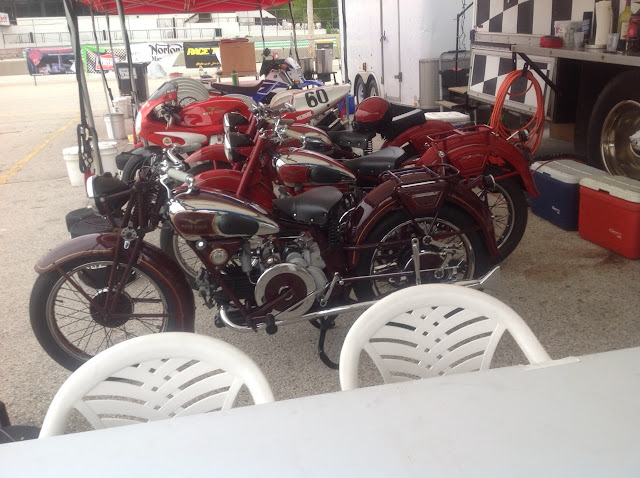